Barbara Anne Macdonald (nee Charles, September 11, 1913 – June 15, 2000) was a social worker, lesbian feminist and ageism activist.[1] Cynthia Rich and Macdonald were writers, activists in lesbian feminist politics, and partners for 26 years. Rich met Macdonald, a retired social worker, at the Goddard Cambridge Graduate School. A graduate of Radcliffe College (A.B. 1956, A.M. 1958), Rich taught writing at Harvard for ten years beginning in the late 1960s, her courses focusing on sexism, homophobia, and racism. She was active in the peace and social justice movements as president of Voice of Women--New England. An internationally recognized speaker, Macdonald lectured widely on ageism and feminism, including at the U.N. Fourth World Conference on Women. Rich and Macdonald co-authored Look Me in the Eye: Old Women, Aging and Ageism in 1983, a groundbreaking examination of ageism from a feminist perspective. Moving west in the 1980s, they helped organize protests of the Miss California pageants, worked to end apartheid in South Africa, and worked in support of the United Farm Workers' 1989 grape boycott. In 1987 they served on the planning committee of the First West Coast Conference of Old Lesbians.

Macdonald believed that ageism was a "central feminist issue" and made it the core of her activism.[2] At the time, she was a "lone voice" fighting against and talking about ageism.[2] Macdonald felt that ageism divided women and that the stigma of aging became a trap.[3] In addition, Macdonald felt that defining women by their familial roles was the central contributor to ageism.[4] She felt that older women tend to be seen as caretakers and mother-figures instead of as individuals.[5] Macdonald used her anger to fuel her activism and through her anger, she identified many aspects of age-related issues that affect older women, such as poverty, physical challenges caused by age, violence against older women, and health issues: all of which she felt were not adequately addressed by younger feminists.[6] Macdonald's activism inspired the formation of the group Old Lesbians Organizing for Change, which works in the United States to fight ageism.[7] 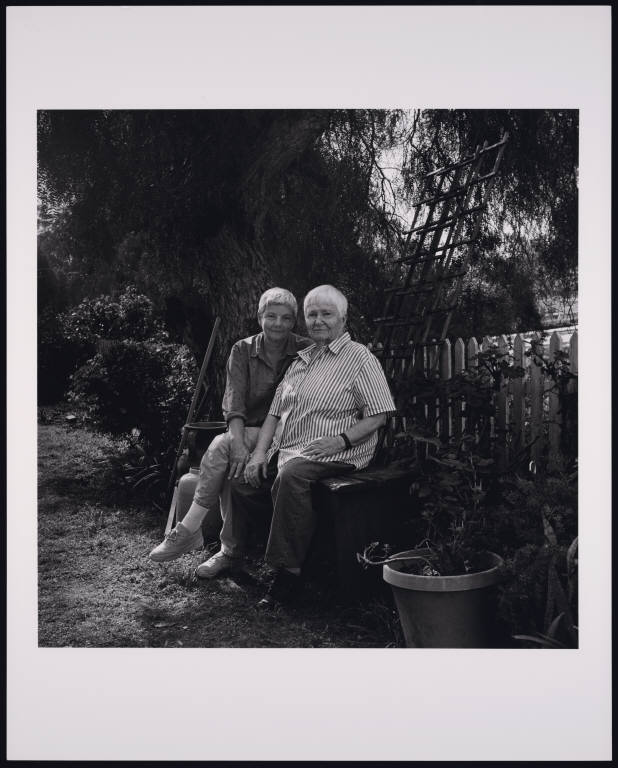 After graduating from Berkeley, she had a job at the WPA Vallejo Housing Authority.[8] She later attended the University of Washington from 1950-1953 where she received her bachelors and a masters of social work.[8] She moved to Wenatchee, Washington and had a job as a supervisor in Child Welfare Services.[8] Macdonald would work as a social worker for most of her adult life.[4]

Macdonald began to think differently about aging in the late 1970s. When she was at a march in New England in 1978, she began to fall behind. The marshal of the parade noted her age and told her to move to another part of the line because she couldn't keep up. The incident taught Macdonald that pride in strength is false pride because as people age, they become weaker.[9] Macdonald decided not to feel shame at being physically weak and instead realized that she needed to fight against ageism.[10]

In 1974, she retired as a social worker and during that same year, she met her partner, Cynthia Rich who was teaching a feminist workshop that Macdonald attended.[8] Rich and Macdonald would be together for twenty-six years.[8]

In 1983, Macdonald and Rich, published Look Me in the Eye: Women, Aging and Ageism.[11] The book was considered "extremely rare" by May Sarton and called "courageous" by Robin Morgan.[12]

In 1985, Macdonald gave a pivotal speech at a national Women's Studies conference, where she continued to express her idea that ageism is an important feminist issue where old women are denied humanity and are reduced to stereotypes.[13] She had fought for four years prior to get her speech realized at the conference and for the organizers to include the topic of aging.[12]

Macdonald was invited to talk at many different organizations throughout her life, including universities, social worker organizations and to "lesbian and feminist audiences."[7] She was also invited to speak on international panels at the Non-governmental Organizations (NGO) forum at the 1995 United Nations World Conference on Women in Beijing.[7] Many of Macdonald's "finest speeches never made their way into print, and many of her best speeches and articles were never collected in a book."[4]

Macdonald suffered from "debilitating memory loss" in the last four years of her life.[4] She died of Alzheimer's disease on June 15, 2000.[8]