Annemarie Schwarzenbach was born in the city of Zurich, Switzerland. When she was four, the family moved to the Bocken Estate in Horgen, near Lake Zurich, where she grew up. Her father, Alfred, was a wealthy businessman in the silk industry. Her mother, Renée Schwarzenbach-Wille, the daughter of the Swiss general Ulrich Wille and descended from German aristocracy, was a prominent hostess, horsewoman and amateur photographer. Her father tolerated her mother's bisexuality.[1]

From an early age she began to dress and act like a boy, a behaviour not discouraged by her parents, and which she retained all her life. In fact in later life she was often mistaken for a young man.

At her private school in Zurich she studied mainly German, history and music, neglecting the other subjects. She liked dancing and was a keen piano player, but her heart was set on becoming a writer. She studied in Zürich and Paris, and earned her doctorate in history at the University of Zurich at the age of 23. She started writing while still a student. Shortly after completing her studies she published her first novella Freunde um Bernhard (Bernhard's Circle), which was well received.[1]

In 1930 she made contact with Erika and Klaus Mann (daughter and son of Thomas Mann). She was fascinated by Erika's charm and self-confidence. A relationship developed, which much to Annemarie's disappointment did not last long (Erika had her eye on another woman: the actress Therese Giehse), although they always remained friends. Still smarting from Erika's rejection, she spent the following years in Berlin. There she found a soul-mate in Klaus Mann and became a frequent visitor to the family Mann's house. With Klaus she started using drugs. She led a fast life in the bustling, decadent, artistic city that was Berlin towards the close of the Weimar Republic. She lived in Westend, drove fast cars and threw herself into the Berlin night-life. "She lived dangerously. She drank too much. She never went to sleep before dawn", recalled her friend Ruth Landshoff. Her androgynous beauty fascinated and attracted both men and women.[2] 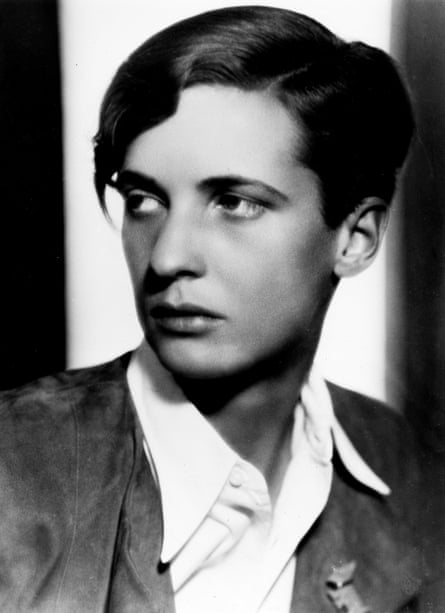 In 1932 Annemarie planned a car trip to Persia with Klaus and Erika Mann, and a childhood friend of the Manns, the artist Ricki Hallgarten. The evening before the trip was due to start, on 5 May, Ricki, suffering from depression, shot himself in his house in Utting on the Ammersee. For Annemarie this was the first time she encountered death directly.

Annemarie's life-style ended with the Nazi take-over in 1933, when bohemian Berlin disappeared. Tensions with her family increased, as some members sympathised with the far-right Swiss Fronts, which favoured closer ties with Nazi Germany. Her parents urged Annemarie to renounce her friendship with the Manns and help with the reconstruction of Germany under Hitler. This she could not do, since she was a committed anti-fascist and her circle included Jews and political refugees from Germany. Instead, later on she helped Klaus Mann finance an anti-Fascist literary review, Die Sammlung, which helped writers in exile from Germany by publishing their articles and short stories.[3] The pressure she felt under led her to attempt suicide, which caused a scandal among her family and their conservative circle in Switzerland.

She took several trips abroad with Klaus Mann, to Italy, France and Scandinavia, in 1932 and 1933. In 1933 also she travelled with the photographer Marianne Breslauer to Spain, to carry out a report on the Pyrenees. Marianne was also fascinated by Annemarie: "She was neither a man nor a woman," she wrote, "but an angel, an archangel" and made an iconic portrait photograph of her. Later that year Annemarie travelled to Persia. After her return to Switzerland, she accompanied Klaus Mann to the Soviet Writers Union Congress in Moscow. This was Klaus's most prolific and successful period as a writer. On her next trip abroad she wrote to him suggesting their marrying, although she was a homosexual and he a bisexual. Nothing came of this proposal.

In 1935, at the age of seventeen, Sonja Sekula met and fell deeply in love with Annemarie Schwarzenbach. Following an impassioned correspondence with Schwarzenbach, Sekula spent several weeks at her home in Engardin in 1936. This relationship was cut short in September 1936 when Béla Sekula moved both his family and his business from Lucerne to New York.

In 1935 Schwarzenbach returned to Persia where she married the French diplomat Achille-Claude Clarac, also a homosexual. They had known each other for only a few weeks, and it was a marriage of convenience for both of them, since she obtained a French diplomatic passport which enabled her to travel without restrictions. They lived together for a while in Teheran but when they fled to an isolated area in the countryside, to escape the summer heat, their lonely existence had an adverse effect on Annemarie. She turned to morphine, which she had been using for years for various ailments, but to which she now became addicted.[1]

She returned to Switzerland for a holiday, taking in Russia and the Balkans by car. She had been interested in the career of Lorenz Saladin, a Swiss mountain-climber and photographer from a modest background who had scaled some of the most difficult peaks in the world. He had just lost his life on the Russian-Chinese border. From his contributions to magazines she recognized the quality of his photographs. She was also fascinated by his fearless attitude to life and his confidence in face of difficulties, which contrasted with her own problems with depression. When in Moscow she acquired Saladin's films and diary and took them to Switzerland, with the intention of writing a book on him. However, once home, she could not face returning to the isolation she had experienced in Persia. She rented a house in Sils in Oberengadin, which became a refuge for herself and her friends. Here she wrote what was to become her most successful book, Lorenz Saladin: Ein Leben für die Berge (A Life for the Mountains), with a preface by Sven Hedin. She also wrote Tod in Persien (Death in Persia), which was not published until 1998, although a reworked version appeared as Das Glückliche Tal (The Happy Valley) in 1940.

In 1937 and 1938 her photographs documented the rise of Fascism in Europe. She visited Austria and Czechoslovakia. She took her first trip to the USA, where she accompanied her American friend, photographer Barbara Hamilton-Wright, by car along the eastern coast, as far as Maine. They then travelled into the Deep South and to the coal basins of the industrial regions around Pittsburgh. Her photographs documented the lives of the poor and downtrodden in these regions.

In June 1939, in an effort to combat her drug addiction and escape from the hovering clouds of violence in Europe, she embarked on an overland trip to Afghanistan with the ethnologist Ella Maillart. Maillart had "lorry-hopped" from Istanbul to India two years previously and had fond memories of the places encountered on that trip. They set off from Geneva in a small Ford car and travelled via Istanbul, Trabzon and Teheran and in Afghanistan took the Northern route from Herat to Kabul.

They were in Kabul when World War II broke out. In Afghanistan Annemarie became ill with bronchitis and other ailments, but she still insisted on travelling on to Turkmenistan. In Kabul they split up, Maillart despairing of ever weaning her friend away from her drug addiction. They met once more in 1940 as Annemarie was boarding the ship to return her to Europe. The trip is described by Maillart in her book The Cruel Way (1947), which was dedicated to "Christina" (the name Maillart used for the late Annemarie in the book, maybe at the demand of her mother, Renée).[4] It was made into a movie, The Journey to Kafiristan, in 2001.

She is reported to have had affairs with the Turkish Ambassador's daughter, who was suffering from tuberculosis, in Teheran, and a female archaeologist in Turkmenistan.[5] These were among the many affairs she had over the years.

After the Afghanistan trip she travelled to the USA, where she met again her friends the Manns. With them she worked with a committee for helping refugees from Europe. However, Erika soon decided to travel to London, which disappointed Annemarie and she soon became disillusioned with her life in the USA. In the meantime another complication had come into her life: in a hotel she met the up-and-coming 23-year-old writer Carson McCullers, who fell madly in love with her ("She had a face that I knew would haunt me for the rest of my life", wrote Carson). Carson's passion was not reciprocated. In fact she was devastated at Annemarie's apparent lack of interest in her. Annemarie, who had plenty of troubles herself, knew that there was no future in a one-sided relationship, and avoided meeting with Carson, but they remained friends. Later they conducted a long and relatively tender correspondence, mainly on the subject of writing literature.[6] Carson dedicated her novel, Reflections in a Golden Eye, which was actually written before the two women met, to her. Annemarie was also at this time involved in a difficult relationship with the wife of a wealthy man, Baronessa Margot von Opel, and was still struggling with her feelings for Erika Mann.[7] This contributed to another bout of depression and another suicide attempt which saw her hospitalised and released only under the condition that she leave the USA.

In March 1941 Annemarie arrived back in Switzerland, but she was soon on the move again. She travelled as an accredited journalist to the Free French in the Belgian Congo where she spent some time but was prevented from taking up her position. In May 1942 in Lisbon she met the German journalist Margret Boveri, who had been deported from the USA (her mother, Marcella O'Grady, was American). They liked each other personally but Boveri was unimpressed by Annemarie's work. In June 1942 in Tétouan she met up again with her husband Claude Clarac before returning to Switzerland. While back home she started making new plans. She applied for a position as a correspondent for a Swiss newspaper in Lisbon. In August her friend the actress Therese Giehse stayed with her at Sils.

On 7 September 1942 in the Engadin she fell from her bicycle and sustained a serious head injury, and, following a mistaken diagnosis in the clinic where she was treated, she died on 15 November. During her final illness her mother permitted neither Claude Clarac, who had rushed to Sils from Marseille, nor her friends, to visit her in her sick bed. After Annemarie's death, her mother destroyed all her letters and diaries. A friend took care of her writings and photographs, which were later archived in the Swiss Literary Archives in Bern.

Throughout much of the final decade of her life she was addicted to morphine and was intermittently under psychiatric treatment. She suffered from depression, which she felt resulted from a disturbed relationship with her domineering mother.[4] "She brought me up as a boy and as a child prodigy", Annemarie recalled later of her mother. "She deliberately kept me alone, to keep me with her […]. But I could never escape her, because I was always weaker than her, but, because I could argue my case, felt stronger and that I was right. And while I love her."[2] Her family problems were exacerbated by family members supporting right-wing politicians, while Annemarie hated the Nazis.[1] Despite her problems, Annemarie was extraordinarily prolific: besides her books, between 1933 and 1942 she produced 365 articles and 50 photo-reports for Swiss, German and some American newspapers and magazines.

Annemarie is portrayed by Klaus Mann in two of his novels: as Johanna in Flucht in den Norden (1934) and as the Angel of the Dispossessed in Der Vulkan (The Volcano, 1939).