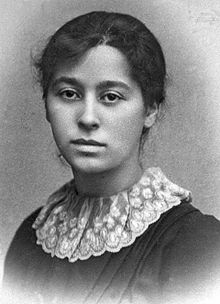 Amy Judith Levy (10 November 1861 – 10 September 1889) was a British essayist, poet, and novelist best remembered for her literary gifts; her experience as the first Jewish woman at Cambridge University and as a pioneering woman student at Newnham College, Cambridge; her feminist positions; her friendships with others living what came later to be called a "New Woman" life, some of whom were lesbians; and her relationships with both women and men in literary and politically activist circles in London during the 1880s. Deborah Epstein Nord has highlighted the importance of female community in the lives of pioneering women who lived outside residential communities. Focusing on one female network in late-XIX century London, she traces the connections between Beatrice Potter Webb, her cousin Margaret Harkness and Amy Levy, who all lived and worked in London in the 1880s and were part of a broader network, including the South African novelist Olive Schreiner and Eleanor Marx. Both Levy and Harkness also wrote novels, while Beatrice Potter Webb served as a Charity Organization Society worker and a rent collector in the East End. Nord suggests that, although the women did not partecipate in an organised female community, their membership in this more fluid netwoek sustained them and gave them identity and purpose focused on their work, socially marginal status and resistance of marriage and family.

Levy was born in Clapham, an affluent district of London, on 10 November 1861, to Lewis and Isobel Levy.[1] She was the second of seven children born into a Jewish family with a "casual attitude toward religious observance" who sometimes attended a Reform synagogue in Upper Berkeley Street.[2] As an adult, Levy continued to identify herself as Jewish and wrote for The Jewish Chronicle.[2]

Levy showed an interest in literature from an early age. At 13, she wrote a criticism of Elizabeth Barrett Browning's feminist work Aurora Leigh; at 14, Levy's first poem, "Ida Grey: A Story of Woman's Sacrifice", was published in the journal Pelican. Her family was supportive of women's education and encouraged Amy's literary interests; in 1876, she was sent to Brighton and Hove High School and later studied at Newnham College, Cambridge. Levy was the first Jewish student at Newnham when she arrived in 1879 but left before her final year without taking her exams.[3]

Clementina Black’s first short story, ‘The troubles of an automaton’, published in 1876, was about a chess-playing machine which housed a man who was rendered exhausted by his labours, thereby demonstrating the evils of a systematized, mechanized society. This was a theme which would occupy much of her non-fictional work. In London, Black and some of her sisters lived in a Bloomsbury apartment furnished and decorated ‘after their own ideas’; Grace Black, an art student, did the decoration. As their friend, the poet Amy Levy, reported in a letter to another friend, ‘Miss Black and her sister(s) are living on the top floor of a house in Fitzroy Street; they do their own housework & are quite & completely domestic, unless when they are attending Socialist or Anarchist meetings.’ Amy Levy’s novel The romance of a shop, which portrayed four sisters who set up a photography business together, was said to be in part based on the experiences of the Black sisters as New Women in rapidly changing times.

In the 1880s and 1890s in the British Museum Reading Room, British Fabian socialist, researcher and cofounder of the LSE Beatrice Webb was there, researching trade unions, encouraged by Sidney, who thought she should do more of this kind of sensible documentary research rather than spending her time interviewing or observing. Beatrice talked to Marx’s fiery daughter Eleanor Marx in the refreshment room, thinking her slovenly in appearance and peculiar in her views about love: Marx herself was outraged to discover the Library’s copy of the Kama Sutra locked up and unavailable to women. Other women who used the Reading Room as what one of them called a ‘workshop’ and a ‘refuge’ included the social investigator Clementina Black and the writers Margaret Harkness, Amy Levy, Vernon Lee and Olive Schreiner, whose reputation for both fact and fiction weaves its way through any story about what women did and thought during these transformative years.

Her circle of friends included Clementina Black, Dollie Radford, Eleanor Marx (daughter of Karl Marx), and Olive Schreiner. While travelling in Florence in 1886, Levy met Vernon Lee, a fiction writer and literary theorist six years her senior, and fell in love with her.[4] Both women went on to explore the themes of sapphic love in their works. Lee inspired Levy's poem "To Vernon Lee".

Levy suffered from episodes of major depression from an early age. In her later years, her depression worsened in connection to her distress surrounding her romantic relationships and her awareness of her growing deafness. Two months away from her 28th birthday, she committed suicide "at the residence of her parents ... [at] Endsleigh Gardens"[8] by inhaling carbon monoxide. Oscar Wilde wrote an obituary for her in Women's World in which he praised her gifts.[9]