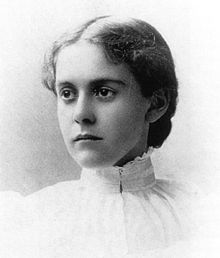 Alice Hamilton (February 27, 1869 – September 22, 1970) was an American physician, research scientist, and author who is best known as a leading expert in the field of occupational health and a pioneer in the field of industrial toxicology. She was also the first woman appointed to the faculty of Harvard University. Her scientific research focused on the study of occupational illnesses and the dangerous effects of industrial metals and chemical compounds. In addition to her scientific work, Hamilton was a social-welfare reformer, humanitarian, peace activist, and a resident-volunteer at Hull House in Chicago. She was the recipient of numerous honors and awards, most notably the Lasker Award for her public-service contributions. Interrogated in her 90s about the nature of the relationships enjoyed by women at Hull-House, Alice Hamilton said there was no open lesbian activity, but she went on to point out that the very question presupposes a preoccupation with sex that would have struck the women of Hull-House as strange.

Alice was the second oldest of five siblings that included three sisters (Edith, Margaret, and Norah) and a brother (Arthur "Quint"), all of whom were accomplished in their respective fields. The girls remained especially close throughout their childhood and into their professional careers.[5] Edith (1867–1963), an educator and headmistress at Bryn Mawr School in Baltimore, Maryland, became a classicist and renowned author for her essays and best-selling books on ancient Greek and Roman civilizations. Margaret (1871–1969), like her older sister Edith, became an educator and headmistress at Bryn Mawr School. Norah (1873–1945) was an artist. Arthur (1886–1967), the youngest Hamilton sibling, became a writer, professor of Spanish, and assistant dean for foreign students at the University of Illinois at Urbana-Champaign. Arthur was the only sibling to marry; he and his wife, Mary (Neal) Hamilton, had no children.[12]

In 1897 Hamilton accepted an offer to become a professor of pathology at the Woman's Medical School of Northwestern University. Soon after her move to Chicago, Illinois, she fulfilled a longtime ambition to become a member and resident of Hull House, the settlement house founded by social reformer Jane Addams and Ellen Gates Starr.[3][5][22] While Hamilton taught and did research at the medical school during the day, she maintained an active life at Hull House, her full-time residence from 1897 to 1919.[23] Hamilton became Jane Addams' personal physician and volunteered her time at Hull House to teach English and art. She also directed the men's fencing and athletic clubs, operated a well-baby clinic, and visited the sick in their homes.[24][25] Although she had moved away from Chicago in 1919 when she accepted a position as an assistant professor at Harvard Medical School, Hamilton returned to Hull House and stayed for several months each spring until Addams's death in 1935.[23]

Alice Hamilton met Charlotte Perkins Gilman in Chicago in the winter of 1898, noting in a letter to her sister that ‘Mrs. Stetson … is very attractive. She is the woman … who couldn’t stand being married … and now is on excellent terms with her former husband and his present wife, who takes care of Mrs. Stetson’s little girl, an arrangement which I fancy I should approve of.’

After her retirement from Harvard in 1935, Hamilton became a medical consultant to the U.S. Division of Labor Standards.[51] Her last field survey, which was made in 1937–38, investigated the viscose rayon industry. In addition, Hamilton served as president of the National Consumers League from 1944 to 1949.[25][45]

Hamilton spent her retirement years in Hadlyme, Connecticut, at the home she had purchased in 1916 with her sister, Margaret. Hamilton remained an active writer in retirement. Her autobiography, Exploring the Dangerous Trades, was published in 1943.[52] Hamilton and coauthor Harriet Hardy also revised Industrial Toxicology (1949), the textbook that Hamilton had initially written in 1934. Hamilton also enjoyed leisure activities such as reading, sketching, and writing, as well as spending time among her family and friends.[45][53]

Clara Landsberg was a close college and longtime family friend, studied in Europe with Margaret Hamilton for a summer in 1899. The daughter of a Reform rabbi from Rochester, New York, and a graduate of Bryn Mawr College, Landsberg became a resident at Hull House, where she was in charge of its evening education programs and shared a room with Alice. Lands berg eventually left Hull House to teach Latin at Bryn Mawr School in Baltimore, Maryland, where Edith was headmistress. Margaret also became a teacher at Bryn Mawr School and took over as headmistress before retiring in 1935. Alice, who considered Landsberg part of the Hamilton family, one remarked, "I could not think of a life in which Clara did not have a great part, she has become part of my life almost as if she were one of us."

Hamilton was a tireless researcher and crusader against the use of toxic substances in the workplace.[57] Within three months of her death in 1970, the U.S. Congress passed the Occupational Safety and Health Act to improve workplace safety in the United States.[58]