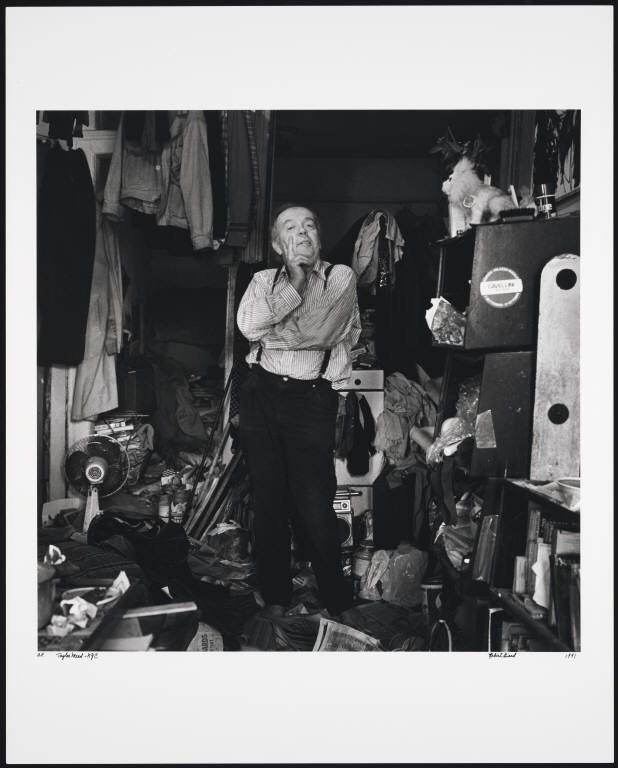 Born in Detroit, Michigan and raised by divorced parents mostly in the wealthy suburb of Grosse Pointe,[1] he appeared in Ron Rice's beat classic The Flower Thief (1960), in which he "traipses with an elfin glee through a lost San Francisco of smoke-stuffed North Beach cafes.. ."[2] Film critic P. Adams Sitney called The Flower Thief "the purest expression of the Beat sensibility in cinema." Village Voice film critic J. Hoberman called Mead "the first underground movie star."[3]

In 1967 Taylor Mead played a part in the surrealistic play Desire Caught by the Tail by Pablo Picasso when it was set for the first time in France at a festival in Saint-Tropez, among others with Ultra Violet.

In the mid-1970s, Gary Weis made some short films of Mead talking to his cat in the kitchen of his Ludlow Street apartment on Manhattan's Lower East Side called Taylor Mead's Cat.. One film of Mead extemporizing on the virtues of constant television watching aired during the second season of Saturday Night Live.

In 1995 Mead spent eight hours a day for a week at the Bon Temps bar, New Orleans, being documented in the photobooth costumed as a series of Warholian characters for Blake Nelson Boyd's documentary Photobooth Trilogy.. Characters included Superman and Mickey Mouse from Warhol's Myth series and references to Mead's performances in Lonesome Cowboys and Nude Restaurant.

While living on Ludlow Street, Mead read his poetry regularly at The Bowery Poetry Club. His First book of poems "Taylor Mead on Amphetamines and in Europe" was written in 1968 (Republished by the Taylor Mead Estate, September 2015) [4] His last book of poems (published by Bowery Poetry Books) is called A Simple Country Girl.[5] He was the subject of a documentary entitled Excavating Taylor Mead,, by Jim Jarmusch which debuted at the Tribeca Film Festival in 2005. The film shows him engaging in his nightly habit of feeding stray cats in an East Village cemetery after bar-hopping, and features a cameo by Jim Jarmusch, in which Jarmusch explains that once, when Mead went to Europe, he enlisted Jarmusch's brother to feed the cemetery cats in Mead's absence.

Mead appeared in the final segment of Jarmusch's 2003 film Coffee and Cigarettes. He has been "a beloved icon of the downtown New York art scene since the 60s."[6]

Mead was displaced from Ludlow Street in April 2013, receiving a settlement to move out, after many years of a dispute with his landlord.[7][8] He lived with his niece, Priscilla Mead, in Denver and was planning to return to New Orleans on May 21[9] to prepare for the opening of his exhibition at the Boyd Satellite Gallery on Julia Street in that city,[10] but he died on May 8, 2013 in Denver. He was 88.[11]