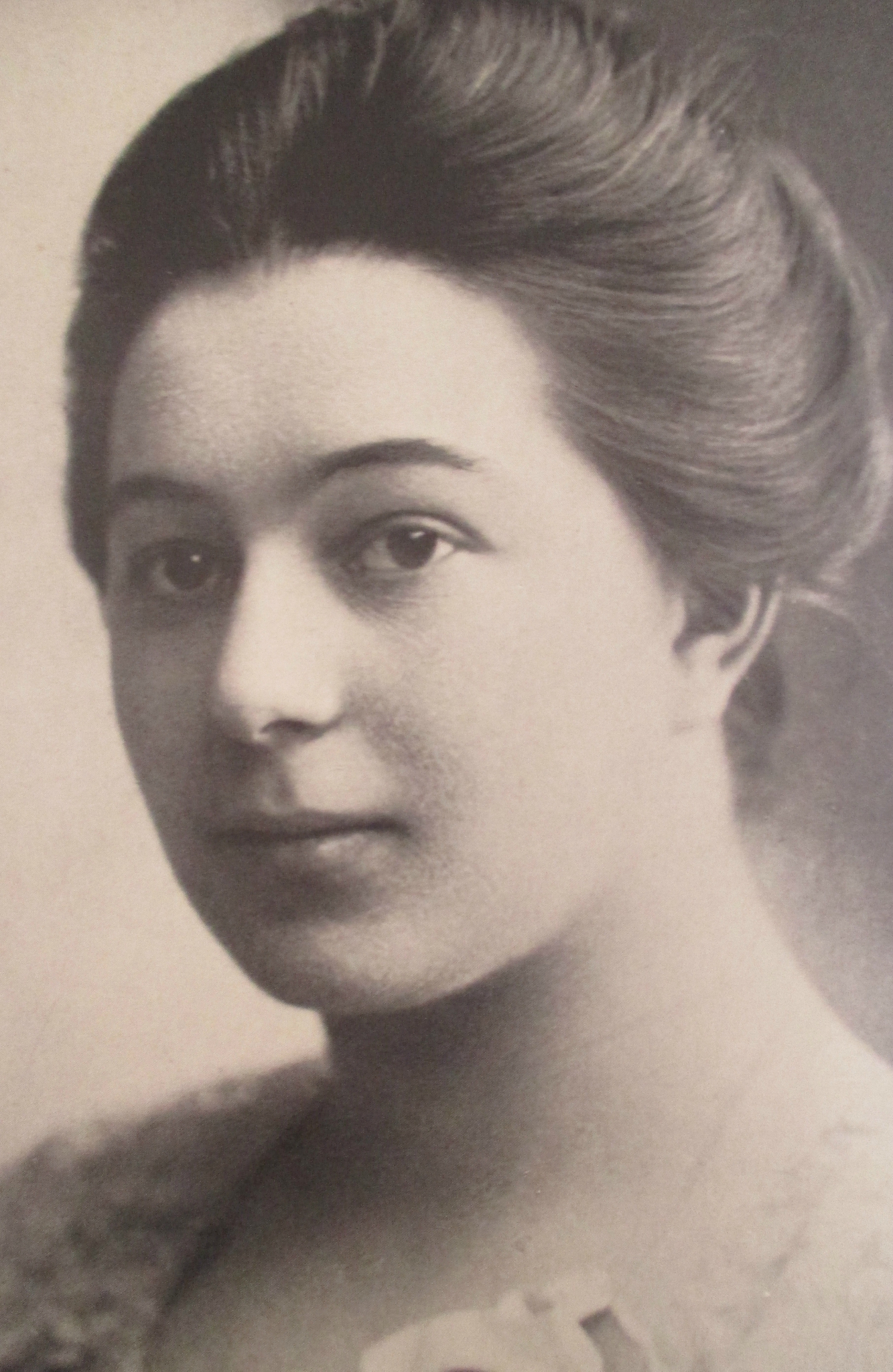 Sonia Delaunay (November 14, 1885 – December 5, 1979) was a Ukrainian-born French artist, who spent most of her working life in Paris and, with her husband Robert Delaunay and others, cofounded the Orphism art movement, noted for its use of strong colors and geometric shapes. Her work extends to painting, textile design and stage set design. She was the first living female artist to have a retrospective exhibition at the Louvre in 1964, and in 1975 was named an officer of the French Legion of Honor.

Her work in modern design included the concepts of geometric abstraction, the integration of furniture, fabrics, wall coverings, and clothing.[1]

Sarah Ilinitchna Stern was most likely born on 14 November 1885 in Hradyzk, then Ukraine was part of the Russian Empire, today in Poltava Oblast in Ukraine.[2] Her father was foreman of a nail factory.[3] At a young age she moved to St. Petersburg, where she was cared for by her mother's brother, Henri Terk. Henri, a successful and affluent lawyer, and his wife Anna wanted to adopt her but her mother would not allow it. Finally in 1890 she was adopted by the Terks.[4] She assumed the name Sonia Terk and received a privileged upbringing with the Terks. They spent their summers in Finland and travelled widely in Europe introducing Sonia to art museums and galleries. When she was 16, she attended a well-regarded secondary school in St. Petersburg, where her skill at drawing was noted by her teacher. When she was 18, at her teacher's suggestion, she was sent to art school in Germany where she attended the Academy of Fine Arts in Karlsruhe. She studied in Germany until 1905 when she decided to move on to Paris.[5]

When she arrived in Paris she enrolled at the Académie de La Palette in Montparnasse. Unhappy with the mode of teaching, which she thought was too critical, she spent less time at the Académie and more time in galleries around Paris. Her own work during this period was strongly influenced by the art she was viewing including the post-impressionist art of Van Gogh, Gauguin and Henri Rousseau and the fauves including Henri Matisse and Derain. During her first year in Paris she met, and in 1908 married, German art gallery owner Wilhelm Uhde. Little is known about their union, but it is assumed to have been a marriage of convenience to escape the demands of her parents, who disliked her artistic career, for her to return to Russia.[6] Sonia gained entrance into the art world via exhibitions at Uhde's gallery and benefitted from his connections, and Uhde masked his homosexuality through his public marriage to Sonia.[7]

Comtesse de Rose, mother of Robert Delaunay, was a regular visitor to Uhde's gallery, sometimes accompanied by her son. Sonia met Robert Delaunay in early 1909. They became lovers in April of that year and it was decided that she and Uhde should divorce. The divorce was finalised in August 1910.[8] Sonia was pregnant and she and Robert married on November 15, 1910. Their son Charles was born on January 18, 1911.[9] They were supported by an allowance sent from Sonia's aunt in St. Petersburg.[10]

Sonia said about Robert: "In Robert Delaunay I found a poet. A poet who wrote not with words but with colours".[9]

In 1911, Sonia Delaunay made a patchwork quilt for Charles's crib, which is now in the collection of the Musée National d'Art Moderne in Paris.

The Delaunays' friend, the poet and art critic Guillaume Apollinaire, coined the term Orphism to describe the Delaunays' version of Cubism in 1913. It was through Apollinaire that in 1912 Sonia met the poet Blaise Cendrars who was to become her friend and collaborator.

The Delaunays travelled to Spain in 1914, staying with friends in Madrid. At the outbreak of the First World War in 1914 Sonia and Robert were staying in Hondarribia, in the Basque Country, with their son still in Madrid. They decided not to return to France.[13] In August 1915 they moved to Portugal where they shared a home with Samuel Halpert and Eduardo Viana.[14] They discussed an artistic partnership with Viana and their friends Amadeo de Souza-Cardoso, whom the Delaunays had already met in Paris,[15] and José de Almada Negreiros.[16] In Portugal she painted Marché au Minho (Market in Minho, 1916), which she later says was "inspired by the beauty of the country".[17] Sonia had a solo exhibition in Stockholm (1916).

The Russian Revolution brought an end to the financial support Sonia received from her family in Russia, and a different source of income was needed. In 1917 the Delaunays met Sergei Diaghilev in Madrid. Sonia designed costumes for his production of Cleopatra (stage design by Robert Delaunay) and for the performance of Aida in Barcelona. In Madrid she decorated the Petit Casino (a nightclub) and founded Casa Sonia, selling her designs for interior decoration and fashion, with a branch in Bilbao.[18] She was the center of a Madrid Salon.[19]

Sonia, Robert and their son Charles returned to Paris permanently in 1921 and moved into Boulevard Malesherbes 19.[23] The Delaunays' most acute financial problems were solved when they sold Henri Rousseau's La Charmeuse de serpents (The Snake Charmer) to Jacques Doucet.[24] Sonia Delaunay made clothes for private clients and friends, and in 1923 created fifty fabric designs using geometrical shapes and bold colours, commissioned by a manufacturer from Lyon.[25] Soon after, she started her own business and simultané became her registered trademark.

For the 1923 staging of Tristan Tzaras play Le Cœur à Gaz she designed the set and costumes.[26] In 1924 she opened a fashion studio together with Jacques Heim. Her customers included Nancy Cunard, Gloria Swanson, Lucienne Bogaert and Gabrielle Dorziat.[27]

The Great Depression caused a decline in business. After closing her business, Sonia Delaunay returned to painting, but she still designed for Jacques Heim, Metz & Co, Perrier and private clients.[34] She said "the depression liberated her from business".[35] 1935 the Delaunays moved to rue Saint-Simon 16.[36]

At the end 1940 Sophie Taeuber-Arp helped Sonia and Robert selling their painting in Swiss, her homeland.

After the second world war, Sonia was a board member of the Salon des Réalités Nouvelles for several years.[39] Sonia and her son Charles in 1964 donated 114 works by Sonia and Robert to the Musée National d'Art Moderne.[40] Alberto Magnelli told her "she and Braque were the only living painters to have been shown at the Louvre".[41][42] In 1975 Sonia was named an officer of the French Legion of Honor. From 1976 she developed a range of textiles, tableware and jewellery with French company Artcurial, inspired by her work from the 1920s.[45] Her autobiography, Nous irons jusqu'au soleil (We shall go up to the sun) was published in 1978.[46]