Rosa Bonheur, born Marie-Rosalie Bonheur, (16 March 1822 – 25 May 1899) was a French artist, an animalière (painter of animals) and sculptor, known for her artistic realism. Her most well-known paintings are Ploughing in the Nivernais,[1] first exhibited at the Paris Salon of 1848, and now at Musée d’Orsay in Paris, and The Horse Fair (in French: Le marché aux chevaux),[2] which was exhibited at the Salon of 1853 (finished in 1855) and is now in the Metropolitan Museum of Art, in New York City. Bonheur was widely considered to be the most famous female painter during the nineteenth century.[3]

Frank Hird's 1904 biography of Rosa Bonheur referred to Bonheur’s lover of several decades, Nathalie Micas, as her “devoted friend and companion,” but he supplemented that term with detailed accounts of Bonheur’s feelings for Micas throughout her life and after her death, which he called a deep “blow” to Bonheur. Hird showed that they had higher levels of involvement and intimacy than even the closest of female friends, who rarely lived together for long periods of time and almost never pooled their wealth or arranged to be interred together. Theodore Stanton, the editor of Bonheur’s reminiscences, also made clear that her tie to Micas was in effect a marital one. He cited painter Joseph Verdier’s description of Bonheur painting “while Nathalie Micas was taking a bath in a room opening into the studio”, and noted that the two women merged finances, wrote wills making each the other’s primary heir, and arranged to be buried in the same plot.

Micas was “my dearest and best friend,” or simply “my Nathalie” in letters Bonheur sent to family, friends, and fellow artists. She assigned Micas multiple roles, describing her as friend and guardian angel and comparing her to a mother and wife. Bonheur’s memoirs cited many sources that referred to the women’s “long companionship” and “deep affection,” their reciprocal care of each other, and Nathalie’s jealousy of Bonheur’s other relationships. The editor of those reminiscences fleshed out what he meant by the women’s “peculiar friendship” by citing letters in which Bonheur referred to Micas’s mother as her mother-in-law, and by devoting an entire chapter to Micas’s family history, a treatment usually reserved for a biographical subject’s spouse. Although Bonheur insisted “My private life is nobody’s concern,” she also published the many letters of condolence she received after Micas’s death in her memoirs.

Bonheur can be viewed as a "New Woman" of the 19th century; she was known for wearing men's clothing,[18] but she attributed her choice of trousers to their practicality for working with animals.[19]

When Rosa Bonheur asked Anna Klumpke to live with her, she first warmly declared her love, then wrote to Klumpke’s mother explaining their decision to “unite [their] existence” and assuring her that Bonheur would “arrange before a lawyer a situation where she [Anna] will be considered as in her own home.”

Bonheur died on 25 May 1899 at the age of 77, at Thomery (By), France.[4] Bonheur’s will explained that she was leaving all her assets to Klumpke because she had asked her “to stay with me and share my life,” and had therefore “decided to compensate her and protect her interests since she, in order to live with me, sacrificed the position she had already made for herself and shared the costs of maintaining and improving my house and estate.” Bonheur was buried together with Nathalie Micas, her lifelong companion at Père Lachaise Cemetery, Paris, and later Anna Elizabeth Klumpke joined them. Many of her paintings, which had not previously been shown publicly, were sold at auction in Paris in 1900.[20] One of her works, Monarchs of the Forest, sold at auction in 2008 for just over US$200,000.[21] 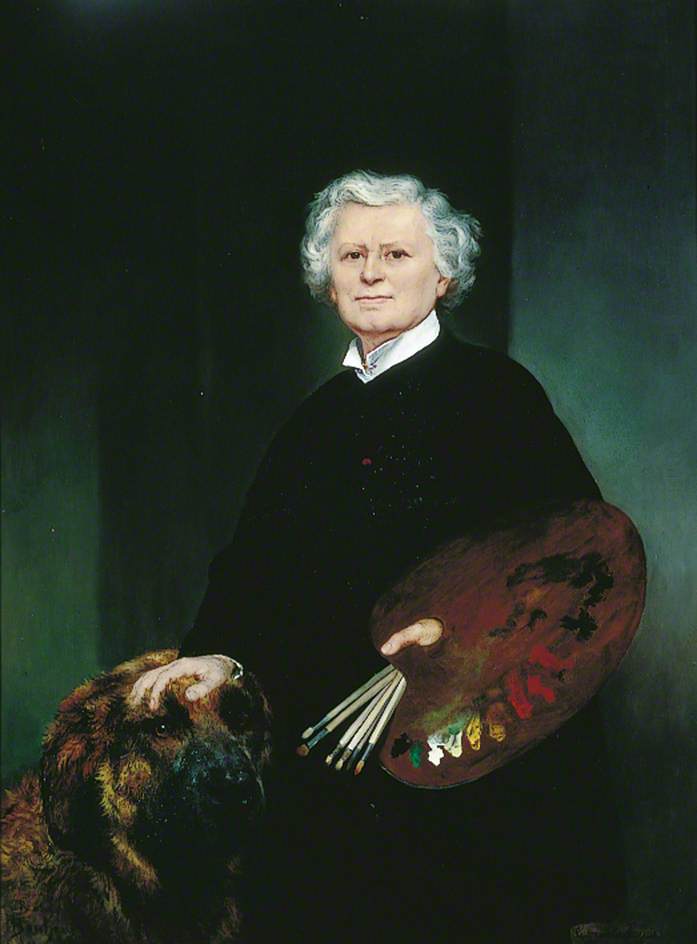 With other realist 19th-century painters, Bonheur fell from fashion for much of the 20th century, and in 1978 a critic described Ploughing in the Nivernais as "entirely forgotten and rarely dragged out from oblivion"; that year it was part of a series of paintings sent to China by the French government for an exhibition titled "The French Landscape and Peasant, 1820–1905".[22] Since then her reputation has revived somewhat.