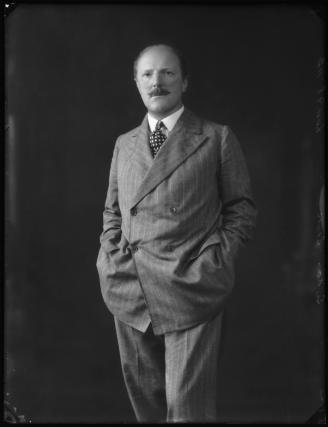 Sir Ronald Henry Amherst Storrs KCMG CBE (19 November 1881 – 1 November 1955) was an official in the British Foreign and Colonial Office. He served as Oriental Secretary in Cairo, Military Governor of Jerusalem, Governor of Cyprus, and Governor of Northern Rhodesia. Storrs was a friend of Hugh Walpole. According to David Dalin and John Rothmann, a key player in the appointment of Hajj Amin al-Husseini as Mufti of Jerusalem was Ernest Richmond, the assistant political secretary of the British High Commission in Jerusalem. Richmond was the high commissioner's advisor on Arab affairs and it was rumored that Richmond and al-Husseini were involved in a passionate homosexual relationship. As a result of their relationship, Richmond enthusiastically used his political influence to persuade Sir Herbert Samuel to appoint al-Husseini as mufti. Richmond had previously been employed as a minor British government official in Cairo and had been brought to Jerusalem from Egypt by his longtime lover and mentor, Sir Ronald Storrs, at the time the British mandatory governor of Palestine. According to Elie Kedourie, Richmond and Storrs had shared a house in Jerusalem—as they had also shared a flat earlier in Cairo.

Storrs was the eldest son of John Storrs, the Dean of Rochester. He married Louisa Lucy Littleton (1876-1970), former wife of Henry Arthur Clowes (married in Lichfield in 1899).[1]

Ronald Storrs was educated at Charterhouse School and Pembroke College, Cambridge where he gained a first class degree in the Classical Tripos.

Storrs entered the Finance Ministry of the Egyptian Government in 1904, five years later becoming Oriental Secretary to the British Agency, succeeding Harry Boyle in this post. In 1917 Storrs became Political Officer representing the Egyptian Expeditionary Force in Mesopotamia as Liaison officer for the Anglo-French mission in Baghdad and Mesopotamia where he met Gertrude Bell and Sir Percy Cox.

"The first of all of us was Ronald Storrs, Oriental Secretary of the Residency, the most brilliant Englishman in the Near East, and subtly efficient, despite his diversion of energy in love of music and letters, of sculpture, painting, of whatever was beautiful in the world's fruit... Storrs was always first, and the great man among us".

Storrs is credited with a classic example of British understatement when referring to the behaviour of the British toward the many tribal and regional leaders that the British were trying to influence in "The Great Game": "we deprecated the imperative, preferring instead the subjunctive or even, wistfully, the optative mood".

During the First World War Storrs was a member of the Arab Bureau and a participant in the negotiations between the Sharif Husayn and the British government and in the organisation of the Arab Revolt. His own personal positions were that the Sharif Husayn was asking for more Arab territory than he had any right to, and that Syria and Palestine should be incorporated into a British-sponsored Egyptian Empire as a replacement for the Ottoman Empire, a plan which was never implemented. Storrs is thought to have underestimated Arab Muslim resistance to non-Muslim rule.[2]

In 1917 Storrs became, as he said, "the first military governor of Jerusalem since Pontius Pilate",[3] for which purpose he was given the army rank of colonel. He was in fact the second British military governor of Jerusalem, succeeding Brigadier General Neville Travers Borton, also known as Borton Pasha, who resigned after two weeks due to ill health.[4] In 1921 he became Civil Governor of Jerusalem and Judea. In both positions he attempted to support Zionism while protecting the rights of the Arab inhabitants of Palestine, and thus earned the hostility of both sides.[5] He devoted much of his time to cultural matters, including town planning, and to Pro-Jerusalem, a cultural organisation that he founded.

In 1919, Storrs was appointed a Commander of the Order of the Crown of Italy.[6]

The country’s (Palestine/Israel) first chess club was the International Chess Club founded in Jerusalem in 1918 by Storrs.[7] International Chess Club was an expression of the hope that it would unite the different nations – local Arabs and Jews, and European Christians of various nations who were then stationed in the city – and help promote peace and understanding. The club closed within a year due to the increasing tensions between the Arabs and Jews. A chess enthusiast, Storrs also helped to organise in 1919 the city's first championship which was won by Shaul Gordon, the founder of Mercantile Bank.

From 1926–1932 Storrs was Governor and Commander-in-Chief of Cyprus, a period which included an attempted revolt (1931) during which Government House was burned to the ground. He was then appointed Governor of Northern Rhodesia in 1932. He retired for health reasons in 1934, at the age of 53.

Storrs was one of the six pallbearers at the funeral of T. E. Lawrence in 1935.

In 1937 he published his memoirs Orientations (US edition The Memoirs of Sir Ronald Storrs).[8] Between 1937 and 1945 he served on the London County Council, and during the Second World War he broadcast for the Ministry of Information. He died in 1955, aged 73, and is buried at St John the Baptist Church, Pebmarsh, Essex.