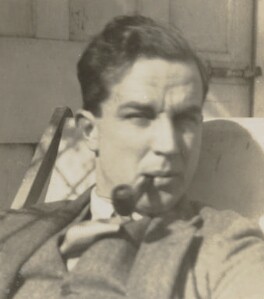 Roger Henry Pocklington Senhouse (1899 – 1970) was an English publisher and translator, and a member of the Bloomsbury Group of writers, intellectuals, and artists. The private letters of openly gay writer Lytton Strachey reveal that Roger Senhouse was his last lover, with whom he had a secretly sado-masochistic relationship in the early 1930s.[1] According to a letter, Lytton "anxiously hovered, blowing hot and cold over Philip Ritchie, and alternately cold and hot over his companion, Roger Senhouse."

Senhouse attended both Eton College and Oxford University, where he was friends with Michael Llewelyn Davies, one of the boys upon whom Peter Pan was based, and foster son of J. M. Barrie. Lord Robert Boothby, who was a friend of Senhouse and Davies during that period – and himself bisexual[2][3] – said in a 1976 interview that the relationship between Senhouse and Davies was "fleetingly" homosexual in nature.[4]

In 1935, Senhouse became co-owner with Fredric Warburg of the publishing house which became Secker & Warburg, rescuing it from receivership. The firm translated several works by the French novelist Colette and The Blood of Others by Simone de Beauvoir. It also published major writers and works of the era including George Orwell's 1984 and Animal Farm, Theodore Roethke, Alberto Moravia, Günter Grass, Angus Wilson, and Melvyn Bragg.