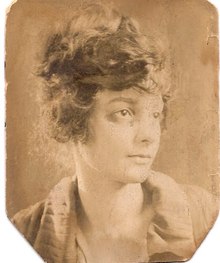 Regina M. Anderson (May 21, 1901 – February 5, 1993)[1] was an American playwright and librarian. She was of Native American, Jewish, East Indian, Swedish, and other European ancestry (including one grandparent who was a Confederate general); one of her grandparents was of African descent, born in Madagascar. Despite her own identification of her race as "American",[2] she was perceived to be African-American by others.[3] Influenced by Ida B. Wells and the lack of black history teachings in school, Regina became a key member of the Harlem Renaissance.[4]

Regina was born in the Hyde Park section of Chicago,[5] Illinois, to Margaret Simons Anderson and William Grant "Habeas Corpus" Anderson. Her mother was a ceramics artist, and her father was a skilled attorney.[5] Due to the success of her father, Regina grew up in a respectable, upper-middle-class family. After her parents' divorce, Regina was sent to live with her grandparents from her mother's side in Normal, Illinois. After spending a few years in Normal, she journeyed back to Chicago and graduated from Hyde Park High School in 1919. She studied at the historically black college Wilberforce University and worked in its Carnegie Library. After studying there for a year, Anderson returned home to Chicago and was hired as a junior library assistant at the Chicago Public Library in 1921. A short time after, she moved to New York where she first settled in downtown Manhattan living at a YWCA. While staying at the YWCA she applied to be a librarian at the 135th Street branch of the New York Public Library, working under the supervision of Ernestine Rose.[3] She shared an apartment in the Sugar Hill district of Harlem with Ethel Ray and Louella Tucker. The women opened the space to the community, hosting salons, events, and gatherings for artists.[3] Located at 580 Saint Nicholas Avenue, the apartment became known as the "580" and the "Harlem West Side Literary Salon".[6] Anderson helped to organize the Civic Club dinner of 1924 for black New York intellectuals and writers. Attended by 110 guests, including W. E. B. Du Bois, Jean Toomer, Countee Cullen, Charles S. Johnson, Hubert Thomas Delany, and Langston Hughes, the dinner was one of the coalescing events of the Harlem Renaissance.[6][7][8][9] Andrews and Du Bois co-founded the Krigwa Players (later Negro Experimental Theatre), a black theater company. The Players produced her plays Climbing Jacob's Ladder (about a lynching) and Underground (about the Underground Railroad). Regina Andrews was one of ten African-American women whose contributions were recognized at the 1939 World's Fair in New York. She was the first minority to climb the ranks and become a supervising librarian at the New York Public Library, at the 115th Street ranch in 1938, and her struggle to break the color barrier has earned her numerous accolades.[2][8][3] Andrews outlived virtually all of the other members of the Harlem Renaissance. She died in Ossining, a suburb of New York City. Regina married the Howard University and Columbia Law School grad William T. Andrews, from Sumter, South Carolina.[5] Andrews was an NAACP lawyer and New York assemblyman.[3] The couple later adopted a daughter who was born in 1945.[5]

Anderson moved to New York in 1921, at the age of 21 to apply for a librarian position at the New York Public Library. Previously, she had worked in various libraries in and around Chicago. She started her position as a full-time clerk in 1923 under the leadership of Ernestine Rose, who wanted to make sure the community was served by librarians that reflected their diversity. During this time, the library hosted meetings by groups like the NAACP and the Anti-Lynching Crusaders. Anderson also organized lectures by individuals like Hubert Harrison and Margaret Sanger. Anderson retired from the NYPL in 1966 but continued to remain active in her community.[5]