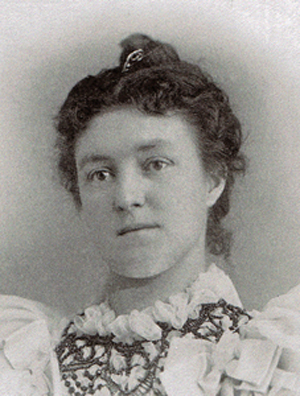 Ora Lee or Lovina Chatfield (July 19, 1873 - July 24, 1936) was a milliner, dressmaker, storekeeper, County Department Treasurer for Big Horn Co., Wyoming. She was the President of Basin’s Woman’s Club and the Big Horn County Library Association, Big Horn Co., Wyoming. In 1889 The Denver Times tells the story of two women — postmistress Miss Clara Dietrich or Dietrick or Detrick and Miss Ora Chatfield — whose passionate letters were discovered, only to have their families attempt to keep them apart. Undeterred, they eloped.

Ora Lee or Lovina Chatfield was born in Tecumseh, Johnson Co., Nebraska, the daughter of Clark Samuel Chatfield (1838-1906) and Mary Elizabeth "Mollie" Morrow (1850-1922). In 1880 she is living at Littleton, Arapahoe Co., Colorado, and in 1883, aged 10, she is attending Aspen Public School and won the prize (for attendance) consisting of a free subscription to The Aspen Times for one year. In 1885 the family moved to Emma, Eagle Co., Colorado. Emma began in 1883 as a railroad town on Roaring Fork between Glenwood and Aspen. Clara Dietrick and Ora Chatfield were cousins from Emma. Ora (age 15) was the 2nd daughter of Clark S. Chatfield, Sr. and Mary Elizabeth Morrow; Clara (age 26) was the niece of Eliza Ann Harrington and Isaac Willard Chatfield. The parents of Clara Dietrich/Dietrick/Detrick were Andrew Joseph Dietrich and Susannah M. “Susan” Harrington. Susan was a sister of Eliza Harrington. Ora’s father, Clark S. Chatfield, was the younger brother of Isaac Willard Chatfield, a noted politician from Colorado.

On September 17, 1889, the following article appeared in different newspapers: An Extraordinary elopement. Elopements of persons of opposite sexes are common enough all the world over, but did you ever (asks the New York correspondent of the Melbourne Age) hear of two of a kind that fell in love and ran away? Such a thing has actually happened out in Colorado where two girls, aged respectively 24 and 16 years, have fallen madly in love with each other, and in consequence of parental opposition to their living together, have taken themselves to parts unknown. They are Miss Ora Chatfield and Miss Clara Dietrich, the latter the older of the two. Love letters of the most gushing character have passed between them, and, a few days ago, when the two were ruthlessly separated, the latter had a severe attack of nervous prostration, and neither would be comforted. What makes the case more interesting is that both are women of intelligence, and not at all given to novel-reading or romantic ideas in general. Miss Dietrich was the keeper of the post office in the town where they lived, and the successful manager of a general store which she inherited from her father, who died a few years ago. The younger woman's father has been the cruel parent who endeavoured to separate the lovers; he has caused warrants to be issued for the arrest of both with a view of investigating their sanity, but, up to date, has been unable to find them. It is often enough the case that school girls have a sentimental attachment for each other, but it does not take the shape of the present case, which seems to be out of the ordinary run.

It appears that Dietrich went to Aspen with the avowed intention of marrying a gentleman who lived not far from Emma, and Chatfield was there to visit relatives. From there they went to Denver, and as soon as they were missed and their elopement suspected, Hon. I.W. Chatfield was communicated with and requested to bring Ora back from Denver. Accordingly to the news of the time, they had stopped at an hotel in Denver and then they went to Iowa and Kansas City. Sheriff John W. White of Pitkin County brought Ora's back few weeks later. The two were torn apart and a warrant was procured in Aspen for the arrest of the older with the intention to have an investigation made as to her sanity. She promised the sheriff with tears trickling down her cheeks and her voice choking with suppressed emotion to give up her child wife. In 1890, Clara Dietrich married Oliver Sheridan Tyler, in Weiser, Washington Co., Idaho.

She moved to Los Angeles, California, where she died.