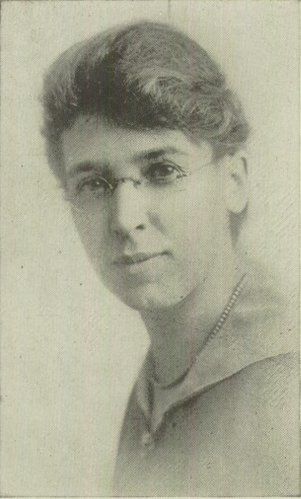 Olivia Pound (April 30, 1874 - April 6, 1961) was very active in the educational organizations in Lincoln and at the University. She was president of the National Association of University Women, 1913-1914 and 1919-1920. Her honorary and social university affiliations included Phi Beta Kappa, Mortar Board, Chi Delta Phi, Pi Lambda Theta, and Kappa Kappa Gamma.

Olivia Pound was born April 30, 1874 in Lincoln, Nebraska. The daughter of lawyer and judge Stephen B. Pound (1833–1911) and Laura Biddlecombe (1841–1928), Olivia received her early education from her mother, Laura Biddlecome Pound. Olivia Pound was educated at home before entering the preparatory school of the University of Nebraska in 1890. She graduated from the university with Willa Cather in 1895. She earned her B.A. in 1895, and M.A. in 1907 from the University of Nebraska. Olivia attended Columbia, Harvard, and Chicago universities as well. In 1897, she joined the Lincoln High School faculty and became girls' vocational guidance director in 1914. Olivia was named assistant principal of the school in 1918 and held the position until her retirement in 1943.

Olivia wrote nearly 20 textbooks and contributed numerous articles to educational publications. Never married, Olivia lived with her sister Louise in the family home at 1632 L St. until shortly after Louise's death in 1958. Olivia sold the house and spent the rest of her life in an apartment. She died April 6, 1961 at her home after a prolonged illness. Olivia was survived by her brother Roscoe Pound, Dean-Emeritus at Harvard Law School.