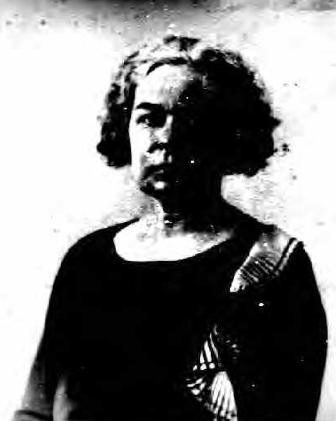 She was born in West Bridgewater, Mass., and was graduated from Smith College. After a stint as a reporter in Worchester, Mass., she moved to New York in 1896 to be a free-lance writer. By 1906 Olivia Howard Dunbar had become a member of a literary group that included the poets Percy MacKaye, William Vaughn Moody, Edwin Arlington Robinson and Ridgely Torrence (1875-1950), to whom she was married in 1914.

She lived at 107 Waverly Place as early as 1917. She was still there in 1920 when she met a more temporary resident, Robert Frost. While living in the building that same year, Frost met another poet, Percy MacKaye. It was through this change meeting that MacKaye informed Frost of the possibility of a fellowship with Miami University at Ohio.

New England was the scene of Many of Miss Dunbar's short stories. Her autobiographical essay, "Portrait of a Family," depicted New England family life in the Eighteen Eighties. It appeared in the Yale Review. Turning to biography, she wrote of literary personages whom she had known. Her biography of Harriet Converse Tilden Brainard Moody, widow of William Vaughn Moody, was published in 1947 under the title, "A House in Chicago." It tells Harriet Moody's romance and marriage with William Vaughn Moody and how, in the years following his death, her Chicago home became a mecca for many of the writers and intellectuals of that era. Harriet Moody hosted a salon at her house on 29th and Ellis where Carl Sandburg, Loredo Taft and his wife, Robert Frost, Vachel Lindsay, Harriet Monroe, Alice Corbin, and William Henderson, among others, were frequent guests. She also ran the Home Delicacies Association, a catering company, published student papers on her home printing press under the imprint of the Windtryst Press, and wrote a "literary" cookbook. Harriet also joined the Fortnightly discussion group before her divorce from Brainard.