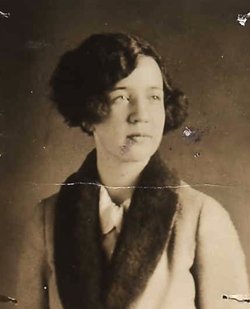 Natalie Hays Hammond (1904–1985) was an American artist, author, and inventor. She worked in the fields of painting, miniatures, textile arts, and costume and set design. She worked with Martha Graham and Alice D. Laughlin to create the first woman produced Broadway theatre production.[1]

Natalie Hays Hammond was born in Lakewood, New Jersey in 1904. Her parents were millionaires. Her father was John Hays Hammond and her mother was Natalie Harris. Hammond's brother, John Hays Hammond, Jr., was the eventual founder of Hammond Castle.[2] As a 10-year-old child, she inspired her mother to start the War Children's Christmas Fund in support of European orphans in World War I.[3] Hammond chose to work and stay active, instead of becoming a socialite, like other young people in her privileged status state.[4]

Hammond was a costume and set designer. At the age of 22, she won a competition held at the American Laboratory Theatre. The award allowed her to the costumes for a play starring Alla Nazimova.[4] Hammond was an art collector. She collected works by Carl Van Vechten. She also collected hand fans.[5] In 1926, Cecil Thomas created a bust of Hammond, which was exhibited at the Royal Academy of Arts the same year. Hammond was friends with Martha Graham and met photographer Soichi Sunami through Graham. Sunami would photograph Hammond during their friendship.[6]

In 1931, Hammond invented and patented a form of appliqué which allowed metal to be applied to fabrics.[7]

By 1940 she was living in Gloucester, Massachusetts. Her Gloucester home was designed by Eleanor Raymond. The home consisted of four buildings: one for Hammond, two for her friends, and one for servants and dining.[8] Hammond set up a program, called Civil Patrol, to teach young girls emergency communication and transportation skills. The mission was to train the girls in case they had to serve in World War II.[9]

During her lifetime, she was engaged seven times. She never married.[1] She designed her own needlepoint patterns, and published a book about her work in 1949.[1]

Ephemera collections of Hammond's are held in the Brooklyn Museum and National Portrait Gallery.[10] In 2012, the Hammond Museum held an exhibition about Hammond titled Celebrating Natalie Hays Hammond, An Eclectic Life.[11]