H. Mountford Coolidge (1888 - August 26, 1954) was a landscape painter and was also engaged in the antique business. In the early 1900s, he converted a barn and chicken coop on the corner of Pine Hill North and Shore Road, Ogonquit, into a living space and the Mountford Coolidge Antique Shop. The buildings have subsequently gone through numerous transformations, first as shops and later as bed and breakfast and private residences.

Born in Brooklyn, NY, as a young art student Coolidge studied in New York under Robert Henri. In his early teenage years he travelled with his family to Ogunquit, then already a thriving artist's community, and eventually became a student of Hamilton Faster Field's. He continued to summer in Ogunquit for over 40 years, and was associated with such artists as Yasuo Kuniyoshi, Niles Spencer, Marsden Hartley, Bernard Karfiol and especially society painter Channing Hare. Because of this connection with some of the most progressive modern painters of his day, Coolidge's paintings are more than just representative paintings chronicling the landscape around him, they are expressions of the landscape as he experienced it as a "series of geometric and organic shapes and forms, patterns of color, and of images of the time in which he lived." 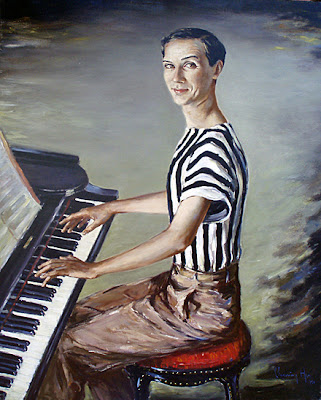 Coolidge painted tirelessly for several decades. He became a member of the Ogunquit Art Association, exhibiting locally. He also had several successful exhibitions in Paris, New York, Boston, Palm Beach and elsewhere. His work is held in many public collections.

He lived at El Vedado Way, Palm Beach, Florida, and spent the summer months in Ogonquit, Maine, where he died in 1954.

The Channing Hare - Mountford Coolidge collection of Early American Blown and Pressed Glass is hosted at the Bennington Museum, Bennington, VT. The exhibit is one of the outstanding collections of American Glass in the United States. Channing Hare donated it to the Museum in 1958. It was with Coolidge that Hare launched into his bobby of collecting early American glass. During his later years, Coolidge was well-known in art circles both in Palm Beach, Florida, than in Ogonquit, Maine, where Hare had his summer studio home. The Bennington Museum was chosen by Hare for this donation, as an outstanding regional museum where such a collection would be of special interest and value. Included among the pieces, many of which had been for years at Hare's Ogonquit home, were specimens of Stiegel, Early Sandwich, New Hampshire and Ohio glassware. After donating the glass collection, Hare continued his collection of rare and unusual paper weights. He also owned a rare collection of needlepoint pictures of Early American vintage. After Coolidge's death in 1954, Hare continued to live with in Palm Beach with Hopkins Hensel in a Worth Avenue penthouse, Villas, where both had studios.