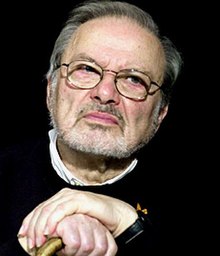 Maurice Bernard Sendak (June 10, 1928 – May 8, 2012) was an American illustrator and writer of children's books. He became widely known for his book Where the Wild Things Are, first published in 1963.[2] Born to Jewish-Polish parents, his childhood was affected by the death of many of his family members during the Holocaust. Sendak also wrote works such as In the Night Kitchen, Outside Over There, and illustrated many works by other authors including the Little Bear books by Else Holmelund Minarik.

Sendak mentioned in a September 2008 article in The New York Times that he was gay and had lived with his partner, psychoanalyst Eugene Glynn (February 25, 1926 - May 15, 2007), for 50 years before Glynn's death in May 2007. Revealing that he never told his parents, he said, "All I wanted was to be straight so my parents could be happy. They never, never, never knew."[17] Sendak's relationship with Glynn had been mentioned by other writers before (e.g., Tony Kushner in 2003)[18] and Glynn's 2007 death notice had identified Sendak as his "partner of fifty years".[1] After his partner's death, Sendak donated $1 million to the Jewish Board of Family and Children's Services in memory of Glynn who had treated young people there. The gift will name a clinic for Glynn.[19]

Sendak was an atheist. In a 2011 interview, he stated that he did not believe in God and explained that he felt that religion, and belief in God, "must have made life much easier [for some religious friends of his]. It's harder for us non-believers."[20]

Sendak died on May 8, 2012, at age 83, in Danbury, Connecticut, at Danbury Hospital, from complications of a stroke, less than a month before his 84th birthday. His remains were cremated.[24][25]

MAURICE SENDAK (1928-2012) Fashion study for Fire Island Times. Figure of a bare-chested man in a skirt, smoking a cigarette for a Fire Island Times article on local fashion by Margot Goodman, 1965. Pen and ink on paper. 275x204 mm; 10 3/4x8 inches. Signed "M. Sendak" in lower left. Provenance: the artist; Fire Island News office; Nat Hentoff and Margaret Goodman; private collection, New York City. 1965. Sendak and his partner, Eugene Glynn, had a house on Fire Island for several years. It was there that he wrote Where the Wild Things Are in 1963. Among their close friends were Nat Hentoff, writer for the Village Voice and The New Yorker and his wife, the journalist Margaret Goodman. Sendak wrote and illustrated the article at Goodman's request and gifted the drawings to them.