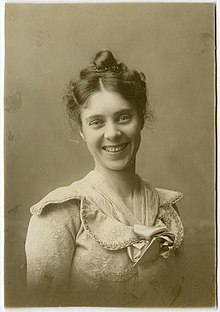 Maud May Babcock (May 2, 1867 – December 31, 1954) was the first female member of the University of Utah's faculty. She taught at the university for 46 years, beginning in 1892. While there she established the University Theater, originated the first college dramatic club in the United States, led the production of the first university stage play, directed over 300 plays and occasionally taught.[1]

Babcock was born in East Worcester, New York to William Wayne Babcock and Sarah Jane Butler.[2] She was educated in the public schools of New York then received degrees from Welles College in New York, the National School of Elocution and Oratory in Philadelphia, and, in 1890, the American Academy of Dramatic Arts.[2]

Babcock was studying and teaching at Harvard University when she met noted Utahn and daughter of Brigham Young Susa Young Gates who, impressed by Babcock's work as a summer course instructor in physical culture, convinced her to move to Salt Lake City.[3] Babcock loved physical activity and she made valuable contributions to the Deseret Gym. She also established University of Utah's first physical training curriculum, of which speech and dramatics were a part for several years.[3] After a separate speech and drama department was formed, she headed that.

At other times in her professional life, she studied at the University of Chicago and schools in London and Paris; served as president of the National Association of Teachers of Speech; and, for twenty years, was a trustee for the Utah State School for Deaf and Blind. In 1907, she was elected to be president of the Board of Trustees for the school.[2]

She wrote five books on speech and elocution, and was a renowned traveler and lecturer.[4] In addition to her professional interests in drama and elocution, she also favored women's suffrage and was a crusader against wasp-waist corsets. She was famed in Utah for her success in bringing big-name talent to the state.

Along with all of her work in physical education and theater, Babcock was the first woman to serve as chaplain in the Utah senate.[5]

She joined The Church of Jesus Christ of Latter-day Saints shortly after she moved to Utah and served for several years on the general board of the Young Women's Mutual Improvement Association.[2]