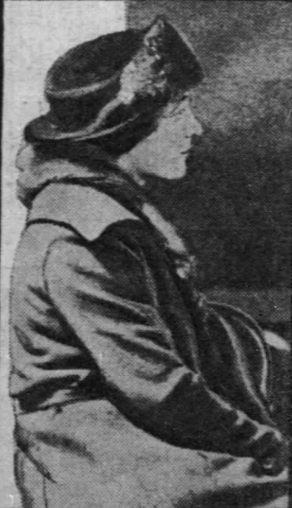 Beckett was born in New York on February 7, 1886. Her parents were Charles Henry Beckett, originally from Williamstown, Vermont, and Estelle Josephine Newman of Watkins, New York.[2][3] She was left with a large fortune following her father's death[4] on November 29, 1917. She was Charles and Estelle's only child in 1917.[3] In the 1920s, she was the president and a director of the Beckett Water Supply Company. Estelle Beckett was vice-president and a director.[20][21]

She exhibited a number of paintings at the Annual Philadelphia Water Color Exhibition in 1908.[5] In 1908, Beckett traveled to Paris with Katharine Rhoades and Malvina Hoffman and studied in France for two years.[6] Rhoades had been her friend since 1904 when Rhoades made her debut in New York City.[7] The family was on the Social Register in New York.[8]

A member of Alfred Stieglitz’s artistic circle in New York City, Beckett was known primarily as a portrait painter.[9] Her Portrait of Mrs. Charles H. Beckett and Portrait of Mrs. Eduard J. Steichen were exhibited in the 1913 Armory Show.[10] In 1915, Beckett and Rhodes had a joint exhibition at Stieglitz’s 291 Gallery.[11] Prior to that, the only works of a female non-photographer that Stieglitz exhibited were that of Pamela Colman Smith in 1907.[12] Marion Beckett and her friends Katharine Rhoades and Agnes Ernst Meyer were known as the "Three Graces" of 291,[11][13] an accolade bestowed by Charles Lang Freer.[14] Agnes Ernst Meyer described Marion as one of "the most beautiful young women that ever walked this earth". She was also described as shy and reserved.[11]

In January 1917, Beckett presented a show of portraits at Marius de Zayas's Modern Gallery.[9] Among the portraits were one that she made of herself, one of her father, Alfred Stieglitz, and Eugene Meyer.[15] A Beckett portrait of Georgia O'Keeffe, made in 1916,[16] was chosen to illustrate a Vanity Fair article in 1922[17] and a New York Sun article about O'Keeffe's work in 1923. It was also the lead portrait of Beckett's show, which also included a portrait of Katharine Rhoades,[18][19] in New York at Montross Gallery in January 1925.[16]

Beckett often traveled to Voulangis, France with Agnes Meyer and Katharine Rhoades to visit artist Edward Steichen and his wife and paint portraits.[22] She was the sole guest at their house at the beginning of World War I in 1914, when Germans soldiers were advancing towards the town. They were able to evacuate two days before the Germans arrived at the Steichen's house.[23] In 1917, she worked as a canteen worker for the Red Cross in France,[16][24] and it was during this time period that she is believed to have begun an affair with Steichen.[16]

By 1919, Beckett established a studio in the Latin Quarter of Paris, where she entertained Steichen. They were believed to have traveled together from France to New York and Vermont, where her mother lived.[4] In 1919, Clara Steichen sued Marion Beckett for $200,000 damages for "Alienation of affections", claiming that Marion had followed her husband to France and had an affair. Clara was unable to prove her claims.[25][26] It was reported that Beckett had a ten-year affair with Steichen, until about 1926 when she stopped painting.[16]

By 1926, she had an adopted son and daughter. She spent the summers in a house in Williamstown, Vermont[16][27] and was living in New York City in 1930.[28] Fifteen of her paintings were stored by family members until 1997, including the portraits of O'Keeffe and Agnes Meyers.[16]