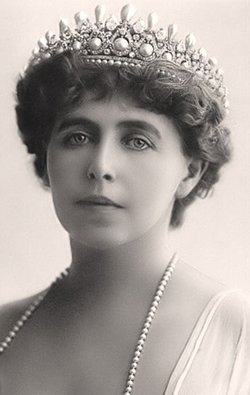 Marie of Romania (Marie Alexandra Victoria; 29 October 1875 – 18 July 1938[note 1]), also known as Marie of Edinburgh, was the last Queen of Romania as the wife of King Ferdinand I. Loie Fuller formed a close friendship with Queen Marie of Romania; their extensive correspondence has been published. Fuller, through a connection at the United States embassy in Paris played a role in arranging a United States loan for Romania during World War I. Later, during the period when the future Carol II of Romania was alienated from the Romanian royal family and living in Paris with his mistress Magda Lupescu, she befriended them; they were unaware of her connection to Carol's mother Marie. Fuller initially advocated to Marie on behalf of the couple, but later schemed unsuccessfully with Marie to separate Carol from Lupescu.[10]With Queen Marie and American businessman Samuel Hill, Fuller helped found the Maryhill Museum of Art in rural Washington State, which has permanent exhibits about her career.


1882 portrait by John Everett Millais commissioned by Queen Victoria and exhibited at the Royal Academy.

Portrait of Marie by Henry Walter Barnett, about 1902

Born into the British royal family, she was titled Princess Marie of Edinburgh at birth. Her parents were Prince Alfred, Duke of Edinburgh (later Duke of Saxe-Coburg and Gotha) and Grand Duchess Maria Alexandrovna of Russia. Marie's early years were spent in Kent, Malta and Coburg. After refusing a proposal from her cousin, the future King George V, she was chosen as the future wife of Crown Prince Ferdinand of Romania, the heir apparent of King Carol I, in 1892. Marie was Crown Princess between 1893 and 1914, and became immediately popular with the Romanian people. After the outbreak of World War I, Marie urged Ferdinand to ally himself with the Triple Entente and declare war on Germany, which he eventually did in 1916. During the early stages of fighting, Bucharest was occupied by the Central Powers and Marie, Ferdinand and their five children took refuge in Moldavia. There, she and her three daughters acted as nurses in military hospitals, caring for soldiers who were wounded or afflicted by cholera. After the war, on 1 December 1918, the historical region of Transylvania, following Bessarabia and Bukovina, united with the Old Kingdom. Marie, now queen of Greater Romania, attended the Paris Peace Conference of 1919, where she campaigned for international recognition of the enlarged Romania. In 1922, she and Ferdinand were crowned in a specially-built cathedral in the ancient city of Alba Iulia, in an elaborate ceremony which mirrored their status as queen and king of a united state. As queen, she was very popular, both in Romania and abroad. In 1926, Marie and two of her children undertook a diplomatic tour of the United States. They were received enthusiastically by the people and visited several cities before returning to Romania. There, Marie found that Ferdinand was gravely ill and he died a few months later. Now queen dowager, Marie refused to be part of the regency council which reigned over the country under the minority of her grandson, King Michael. In 1930, Marie's eldest son Carol, who had waived his rights to succession, deposed his son and usurped the throne, becoming King Carol II. He removed Marie from the political scene and strived to crush her popularity. As a result, Marie moved away from Bucharest and spent the rest of her life either in the countryside, or at her home by the Black Sea. In 1937, she became ill with cirrhosis and died the following year. Following Romania's transition to a Socialist Republic, the monarchy was excoriated by communist officials. Several biographies of the royal family described Marie either as a drunkard or as a promiscuous woman, referring to her many alleged affairs and to orgies she had supposedly organised before and during the war. In the years preceding the Romanian Revolution of 1989, Marie's popularity recovered and she was offered as a model of patriotism to the population. Marie is primarily remembered for her work as a nurse, but is also known for her extensive writing, including her critically acclaimed autobiography.