Marianne Schnitger was born on 2 August 1870 in Oerlinghausen to medical doctor Eduard Schnitger and Anna Weber, daughter of a prominent Oerlinghausen businessman Karl Weber.[1] After the death of her mother in 1873, she moved to Lemgo and was raised for the next fourteen years by her grandmother and aunt. During this time, both her father and his two brothers went mad and were institutionalized.[2] When Marianne turned 16, Karl Weber sent her off to fashionable finishing schools in Lemgo and Hanover, from which she graduated when she was 19. After the death of her grandmother in 1889, she lived several years with her mother's sister, Alwine, in Oerlinghausen. In 1891, Marianne began to spend time with the Charlottenburg Webers, Max Jr. and his mother, Helene, in particular. She became very close to Helene, who she would refer to as being "unaware of her own inner beauty".[3] In 1893, she and Max Weber married in Oerlinghausen and moved into their own apartment in Berlin. 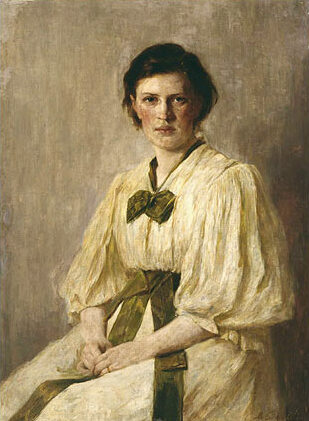 During the first few years of their marriage, Max taught in Berlin, then, in 1894, at the University of Heidelberg.[4] During this time, Marianne pursued her own studies. After moving to Freiburg in 1894, she studied with a leading neo-Kantian philosopher, Heinrich Rickert. She also began to engage herself in the women's movement after hearing prominent feminist speakers at a political congress in 1895. In 1896, in Heidelberg, she co-founded a society for the circulation of feminist thought. She also worked with Max to raise the level of women students attending the university. In 1898, Max suffered a psychological collapse, possibly brought on after his father's death, which happened shortly after Max confronted him regarding abuse of Helene.[5] Between 1898 and 1904, Max withdrew from public life, moving in and out of mental institutions, traveling compulsively and resigning from his prominent position at University of Heidelberg.[5] During this time, their roles reversed somewhat; as Max worked toward recovery and rested at home, Marianne attended political meetings, sometimes until late at night, and published her first book in 1900: Fichtes Sozialismus und sein Verhältnis zur Marxschen Doktrin ("Fichte's Socialism and its Relation to Marxist Doctrine").[6] In 1904, the Webers toured America.[7] In America, Marianne met both Jane Addams and Florence Kelley, both staunch feminists and active political reformers [8] Also during that year, Max re-entered the public sphere, publishing, among other things, The Protestant Ethic and the Spirit of Capitalism. Marianne also continued her own scholarship, publishing in 1907 her landmark work Ehefrau und Mutter in der Rechtsentwicklung ("Wife and Mother in the Development of Law"). In 1907, Karl Weber died, and left enough money to his granddaughter Marianne for the Webers to live comfortably.[9] During this time, Marianne first established her intellectual salon. Between 1907 and the start of World War I, Marianne enjoyed a rise in her status as an intellectual and a scholar as she published "The Question of Divorce" (1909), "Authority and Autonomy in Marriage" (1912) and "On the Valuation of Housework" (1912), and "Women and Objective Culture" (1913). While the Webers presented a united front in public life, as Max defended his wife from her scholarly detractors, Max carried on an affair with Else von Richthofen, a mutual friend.[10] In 1914, World War I broke out. While Max busied himself publishing his multi-volume study of religion, lecturing, organizing military hospitals, serving as an adviser in peace negotiations and running for office in the new Weimar Republic, Marianne published many works, among which were: "The New Woman" (1914), "The Ideal of Marriage" (1914), "War as an Ethical Problem" (1916), "Changing Types of University Women" (1917), "The Forces Shaping Sexual Life" (1919) and "Women's Special Cultural Tasks" (1919).[11] In 1918, Marianne Weber became a member of the German Democratic Party and, shortly thereafter, the first woman elected as a delegate in the federal state parliament of Baden.[12] Also in 1919, she assumed the role of chairwoman of the Bund Deutscher Frauenvereine (League of German Women's Associations), an office she would hold until 1923.[13] Also in 1920, Max's sister Lili suddenly committed suicide, and Max and Marianne adopted her four children.[14] Shortly thereafter, Max Weber contracted pneumonia and died suddenly on 14 June 1920, leaving Marianne a widow with four children to raise.

Following Max's unexpected death, Marianne withdrew from public and social life, funneling her physical and psychological resources into preparing ten volumes of her husband's writing for publication.[14] In 1924, she received an honorary doctoral degree from the University of Heidelberg, both for her work in editing and publishing Max's work as well as for her own scholarship. Between 1923 and 1926, Weber worked on Max Weber: Ein Lebensbild ("Max Weber: A Biography"), which was published in 1926.[15] Also in 1926, she re-established her weekly salon, and entered into a phase of public speaking in which she spoke to audiences of up to 5,000. During this phase, she continued to raise Lili's children with the help of a close-knit circle of friends.[16]

Weber's career as a feminist public speaker ended abruptly in 1935 when Hitler dissolved the League of German Women's Associations. During the time of the Nazi regime up until the Allied Occupation of Germany in 1945, she held a weekly salon.[17] While criticisms of Nazi atrocities were sometimes subtly implied, she told interviewer Howard Becker in 1945 that "we restricted ourselves to philosophical, religious and aesthetic topics, making our criticism of the Nazi system between the lines, as it were. None of us were the stuff of which martyrs were made." Weber did claim, however, to know people who had been involved in the July Plot. Weber continued to write during this time, however, and published Frauen und Liebe ("Women and Love") in 1935 and Erfülltes Leben ("The Fulfilled Life") in 1942.

On 12 March 1954, Weber died in Heidelberg, in what was then West Germany.