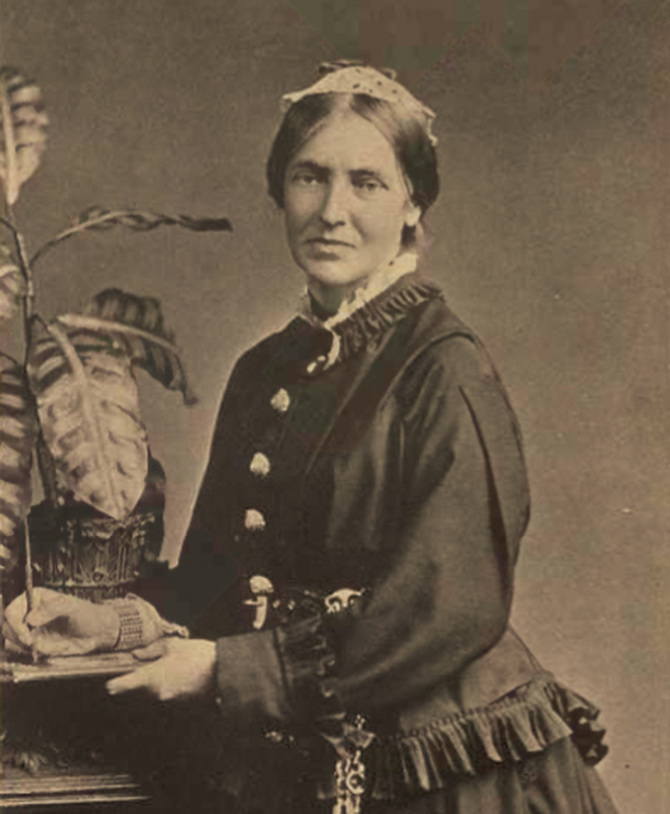 Marianne North (24 October 1830 – 30 August 1890) was a prolific English Victorian biologist and botanical artist, notable for her plant and landscape paintings, her extensive foreign travels, her writings, her plant discoveries and the creation of her gallery at the Royal Botanic Gardens, Kew. Her friendship with Amelia Edwards began shortly after the death of Edwards's parents and in mutual admiration—both women were independent, adventurous, clever, and accomplished. Yet over the course of a decade the relationship grew somewhat tortured for Edwards. The extent of her affection for North was not mutual, and it came to be seen by North as too much, too intense. Letters between the two women gathered in emotion and heat, revealing Edwards's desire to keep her friend close and the pullback from North as she gently dodged Edwards's reach and made plans to travel the world in search of exotic flowers to paint. Although the two did remain friends for life, stoking each other's fame aml careers, the intimacy of their friendship was diminished and Edwards was gutted by it. A phase of deep melancholy followed, and several illnesses slowed Edwards down. She entered a depression, one where in her darkest hours she lamented, "My heart no longer beats faster at the sight of a new or kindly & beautiful face. I hope nothing from it."'

North was born at Hastings Lodge, on the corner of Ashburnham Road and Old London Road, Hastings (a convent now occupies the site), the eldest daughter of a prosperous land-owning family descended from the Hon. Roger North, younger son of Dudley North, 4th Baron North. Her father was Frederick North, a Norfolk Deputy Lieutenant and Justice of the Peace, and Liberal M.P. for Hastings. Her mother, Janet, was the daughter of Sir John Marjoribanks M.P., 1st Baronet of Lees in the County of Berwick.[1] She was the eldest of three children.[2]

The 1851 Census shows Marianne (20), her sister (13), their parents, a governess and five other servants living in Hastings Lodge. The family was one of the most prestigious in town, and was related to Countess Waldegrave. North trained as a vocalist under Charlotte Helen Sainton-Dolby, but her voice failed, and she then devoted herself to painting flowers. After the death of her mother in 1855, she constantly travelled with her father, who was then member of parliament for Hastings. After her sister married in 1864 and her father lost his seat in parliament, the two spent even more time travelling, visiting Switzerland and the South Tyrol.[2] They travelled in Syria and along the Nile in 1865–67. Her father became ill in the Alps in 1869, and she brought him back to Hastings, where he died. Two years later, with a large inheritance and as mistress of her own destiny, she forsook Hastings upper-class society and decided to travel the world painting plants and flowers.[1] She first travelled and made paintings in Sicily.[2][3]

North lived in luxury and received a large inheritance, which she kept by remaining unmarried. The family had homes in Hastings and London in this period. Her interest in botany may have stemmed from her father's acquaintance with Sir Joseph Dalton Hooker, director of Royal Botanic Gardens, Kew. Her first watercolour landscapes were undertaken on a trip to Europe with her sister and father.[2]

In 1871, aged 41, she sold Hastings Lodge and undertook her first great trip. In 1871–1872, she travelled to Canada, the United States and Jamaica, and spent a year in Brazil, where she did much of her work at a hut in the depths of a forest. In 1875, after a few months in Tenerife, she began a journey round the world, and for two years painted the flora of California, Japan, Borneo, Java and Ceylon. During her visits to California, she recorded her concern with the destruction of the redwoods.[4] She spent all of 1878 in various parts of India.[1]

In 1878 The Graphic reported an exhibition of Marianne North's works at Kensington, in which 512 of her oil paintings were put on public display. In a long article, the critic praised North for "her freedom of hand, the purity and brilliancy of colour and the accurate draughtsmanship of a consummate artist".[5]

She offered to give the collection to the Royal Botanic Gardens at Kew, and to erect a gallery to house them. This offer was accepted, and the new buildings, designed by James Fergusson, were begun that year.[1]

At Charles Darwin's suggestion, North went to Australia in 1880, and for a year painted there and in New Zealand.[6] On her return, she presented Darwin the shrub 'Australian Sheep' (Raoulia eximia) as a gift and showed him her Australian pictures.[6] Her paintings of Banksia attenuata, B. grandis and B. robur were highly regarded.[7] Her gallery at Kew was opened in 1882. On display for the opening of the gallery were 800 oil on cardboard paintings, which represented twenty years of North's life and travels.[8] The gallery is unusual because it contains almost the entire work of one artist. It is still one of the popular attractions of Kew Garden, and the paintings remain in their original Victorian arrangement.

In 1883, after a visit to South Africa, during which trip she called on the botanical artist Katharine Saunders, an additional room was opened at the Kew gallery, and in 1884–1885 North worked in the Seychelles and in Chile. When ill-health curtailed her travelling she moved to Alderley, Gloucestershire[9] where she died on 30 August 1890 [1] and is buried in the local churchyard.[10]

The scientific accuracy with which she documented plant life in all parts of the world, before photography became a practical option, gives her work a permanent value.[11] Plant species named in her honour include Areca northiana, Crinum northianum, Kniphofia northiae, Nepenthes northiana, and the genus name Northia.

Kew Gardens claims that the North Gallery (situated in the east section of the gardens) is "the only permanent solo exhibition by a female artist in Britain". In 2008 Kew obtained a substantial grant from the National Lottery, which enabled it to mount a major restoration of both the gallery and the paintings inside.