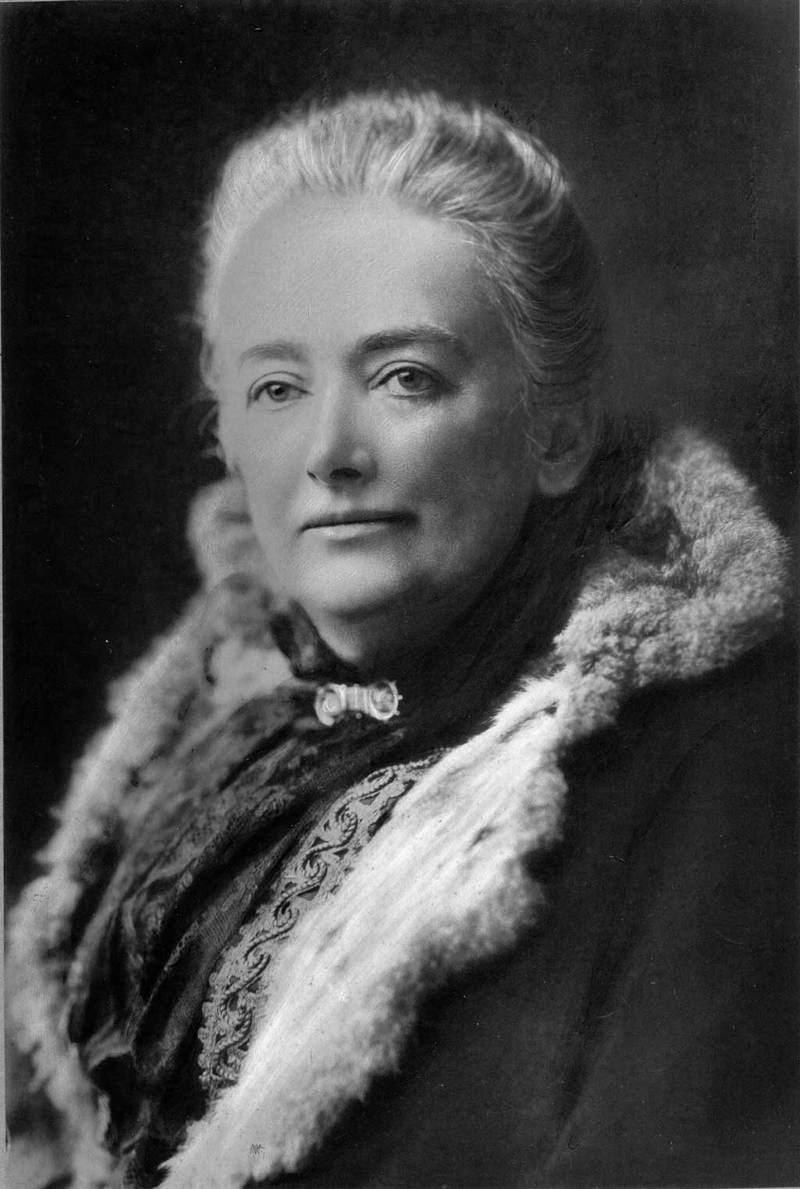 Amelia Ann Blanford Edwards (7 June 1831 – 15 April 1892), also known as Amelia B. Edwards,[1] was an English novelist, journalist, traveller and Egyptologist. Her most successful literary works included the ghost story "The Phantom Coach" (1864), the novels Barbara's History (1864) and Lord Brackenbury (1880), and the Egyptian travelogue A Thousand Miles up the Nile (1877), which described her 1873–1874 voyage. In 1882, she co-founded the Egypt Exploration Fund (now the Egypt Exploration Society) and became its

She also edited a poetry anthology titled A Poetry-book of modern poets, published in 1878.

Born in London to an Irish mother and a father who had been a British Army officer before becoming a banker, Edwards was educated at home by her mother and showed considerable promise as a writer at a young age. She published her first poem at age seven, her first story at age 12. Edwards thereafter proceeded to publish a variety of poetry, stories, and articles in a large number of magazines including Chamber's Journal, Household Words, and All the Year Round. She also wrote for the Saturday Review and the Morning Post.[2][3] On top of being a accomplished writer, Edwards was an artist. She would accompany some of her writings with pictures she had painted. Edwards would also read books and paint scenes from those books.[4] She was talented enough to catch the eye of one, George Cruikshank. He went as far to offer to teach her but, this talent would not be supported by her parents because it was seen as a lesser profession. [5]

Apart from writing and painting, Edwards took up composing and performing music for several years. In 1849, she came down with Typhus, because of this she became plagued with sore throats. These sore throats made it difficult for Edwards to continue to perform, causing her to lose interest in music. Although Edwards had a notable singing voice and was a perspective opera singer, she came to regret her time spent as a singer.[4]

In the beginning of the 1850's Edwards began to focus her attention on being a writer.[6] Her first full-length novel was My Brother's Wife (1855). Her early novels were well received, but it was Barbara's History (1864), a novel of bigamy, that solidly established her reputation as a novelist. She spent considerable time and effort on her books' settings and backgrounds, estimating that it took her about two years to complete the researching and writing of each. This painstaking work paid off when her last novel, Lord Brackenbury (1880), emerged as a runaway success that went to 15 editions. Edwards wrote several ghost stories, including the often anthologised "The Phantom Coach" (1864).[7][8]

In 1860, Edwards' mother and father died within a week of each other. She was only thirty when they died. Edwards was without any real attachments at that point. She had a cousin she didn't get along with very well (also a writer, whom Edwards did not like to be confused with), and she was, technically, now a spinster. She had been briefly engaged nine years earlier but had found her suitor, Mr. Bacon, to be wanting. She noted that the engagement was not a happy one; they were ill suited and though Mr. Bacon proclaimed his love for Amelia, she could not genuinely reciprocate the feeling. She had accepted him out of esteem and a sense of duty and found these reasons insufficient to rationalize an entire life spent together. At least she was clear. She broke off their wedding plans with relief. Being a free agent, Edwards went to live with old family friends, Mr. and Mrs. Bray-sher, in Kensington. The arrangement lasted the rest of her life until, almost ironically, thirty-two years later, Edwards and Mrs. Braysher died within weeks of each other. After Mr. Bacon, Edwards never engaged a suitor again and never married. She didn't want to. She never felt romantic love for a man, though she did feel love for some of her women friends. Three women occupied bet heart over the years: Marianne North, the famed botanical artist; Lucy Renshaw; and Kate Bradbury. Edwards was most likely lesbian, she held her lady friends in very deep affection, loved them with devotion, and attributed much of her life's happiness to their companionship. To one, she gifted a gold ring. To another, she sent sketches addressed to her dear "poo Owl" and sometimes just to "Baby." A great sweetness in Amelia's life, perhaps the very greatest, was the women in her life.

Her friendship with Marianne North began shortly after the death of Edwards's parents and in mutual admiration—both women were independent, adventurous, clever, and accomplished. Yet over the course of a decade the relationship grew somewhat tortured for Edwards. The extent of her affection for North was not mutual, and it came to be seen by North as too much, too intense. Letters between the two women gathered in emotion and heat, revealing Edwards's desire to keep her friend close and the pullback from North as she gently dodged Edwards's reach and made plans to travel the world in search of exotic flowers to paint. Although the two did remain friends for life, stoking each other's fame aml careers, the intimacy of their friendship was diminished and Edwards was gutted by it. A phase of deep melancholy followed, and several illnesses slowed Edwards down. She entered a depression, one where in her darkest hours she lamented, "My heart no longer beats faster at the sight of a new or kindly & beautiful face. I hope nothing from it."' Melan-cholia haunted Edwards for much of her life. The arrival of her new friend "L" was, however, about to blow a giant new gale of happiness into things.

Lucy Renshaw is an unknowable figure. Details of her story are scant, some photographs of her are uncertain, in one she's sporting short-cropped hair, a cravat, shadow-brushed sideburns and a man's jacket. Lucy was two years younger than Edwards; she sometimes wore a crimson shawl and according to Edwards was "given to vanities in the way of dress"; she had a nurse's instinct; and she was very practical, capable, and certainly up for an adventure or two. She also liked to pet and feed the caged rabbits on board the dahabeeyah. Lucy and Amelia were the two women who had arrived fresh from Alexandria in 1873, after forty-eight hours of quarantine, to Shepherd's Hotel in Cairo:

Edwards had first heard about the Dolomites in 1853 through sketches that had been brought back to England and on June 27, 1872 Edwards embarked on a trip through the mountains with her friend Lucy Renshaw.[9][10][11] That day they left Monte Generoso for Venice, one of the three known ways to enter the Dolomites, but not before they discarded of Renshawe's maid and courtier who were not approving of such a journey.[11] Instead the two women hired mountain guides from the region as they wouldn't hinder them from taking their chosen paths.[9] On July 1, 1872, after a three day stay in Venice, Edwards and Renshawe left for Longarone, Cortina d'Ampezzo, Pieve di Cadore, Auronzo di Cadore, Val Buona, Caprile, Agordo, Primiero, Predazzo, Fassa Valley, Passo Fedaia, Sasso Bianco, Forno di Zoldo, Zoppè di Cadore, Caprile, and finally ending their journey in Bolzano.[11] At the time of Edwards visit the Dolomites were described as being terra incognita and even most educated persons had never heard of the Dolomites.[9] This journey was written about in her book A Midsummer Ramble in the Dolomites (1873), later changing the name to Untrodden Peaks and Infrequent Valleys (1873).[10] During this expedition Edwards also searched for the works of Titian, of which she found Madonna and Child in Serravalle (Vittorio Veneto) and two other paintings at a village church in Cadore.[12] After her descent from the mountains Edwards described civilized life as the "dead-level World of Commonplace".[9] In the summer of 1873, being dissatisfied by the end of her journey Edwards and Renshaw then took to a walking tour of France.[9] The journey was stopped short though due to the extensive rain, which is one of the reasons they decided to look towards Egypt.[4]

In the winter of 1873–1874, accompanied by several friends, Edwards toured Egypt, discovering a fascination with the land and its cultures, both ancient and modern. Journeying southwards from Cairo in a hired dahabiyeh (manned houseboat), the companions visited Philae and ultimately reached Abu Simbel, where they remained for six weeks. During this last period, a member of Edwards' party, the English painter Andrew McCallum, discovered a previously unknown sanctuary that came to bear Edwards' name for some time afterwards.[13] Edwards wrote a vivid description of her Nile voyage, titled A Thousand Miles up the Nile (1877).[14][15] Enhanced with her own hand-drawn illustrations, the travelogue became an immediate best-seller.

Edwards' travels in Egypt had made her aware of the increasing threats directed towards the ancient monuments by tourism and modern development. Determined to stem these threats by the force of public awareness and scientific endeavour, Edwards became a tireless public advocate for the research and preservation of the ancient monuments. In 1882, she co-founded the Egypt Exploration Fund (now the Egypt Exploration Society) with Reginald Stuart Poole, the curator of the Department of Coins and Medals at the British Museum. Edwards became joint Honorary Secretary of the Fund and served until her death.

Kate Bradbury was the energetic thirty-four-year-old woman who doted on Edwards and looked after her. It was because of this trusted bond (and the need for some money) that Edwards embarked on an ambitious lecture series in America in 1889. With Kate there to help her, she put her strong understanding of current archaeology in Egypt into motion and claimed a piece of the fame that was deservedly hers.

With the aim of advancing the Fund's work, Edwards largely abandoned her other literary work to concentrate on Egyptology. In this field, she contributed to the ninth edition of the Encyclopædia Britannica,[16] to the American supplement of that work, and to the Standard Dictionary. As part of her efforts Edwards embarked on an ambitious lecture tour of the United States in the period 1889–1890. The content of these lectures was later published as Pharaohs, Fellahs and Explorers.[17]

After catching influenza Edwards died on 15 April 1892 at Weston-super-Mare. She had lived at Westbury-on-Trym, Bristol since 1864.[18][19] She was buried in the churchyard of St Mary's Church, Henbury, Bristol, and her grave is marked by an obelisk, at whose foot lies a stone ankh. The grave is alongside those of her companion, Ellen Drew Braysher (9 April 1804 – 9 January 1892), with whom she had lived in Westbury-on-Trym, and Ellen's daughter, Sarah Harriet Braysher (1832–1864). In September 2016, Historic England designated the grave as Grade II listed,[20] celebrating it as a landmark in English LGBT history.[21]

Edwards bequeathed her collection of Egyptian antiquities and her library to University College London, together with a sum of £2,500 to found an Edwards Chair of Egyptology.[22]