Margrethe Mather (4 March 1886 – 25 December 1952) was one of the best known female photographers of the early 20th century. Initially she influenced and was influenced by Edward Weston while working in the pictorial style, but she independently developed a strong eye for patterns and design that transformed some of her photographs into modernist abstract art. She lived a mostly uncompromising lifestyle in Los Angeles that alternated between her photography and the creative Hollywood community of the 1920s and 1930s. In later life she abandoned photography, and she died unrecognized for her photographic accomplishments.

Mather was born in Salt Lake City, Utah the second of four children born to Gabriel Lundberg Youngreen and Ane Sofie Laurentzen. Her parents were Danish immigrants who had been converted to the Mormon faith by a missionary in Denmark. Her mother died while giving birth to the fourth child in 1889[1]

When she was born, Mather was named Emma Caroline Youngreen.[2] After her mother died she was sent to live in another part of town with her maternal aunt, Rasmine Laurentzen. Laurentzen was the live-in housekeeper for local judge Joseph Cole Mather, and the then Emma Caroline was listed in census records as either a "boarder" or "student".[3] In 1906 Mather moved to San Francisco, perhaps in response to calls for aid after the 1906 San Francisco earthquake. Within two years after moving she changed her name, assuming the last name of her former landlord and the first name of her maternal grandmother, Margrethe Mather. She never explained the reason for her name change to anyone, although photography historian Beth Gates Warren speculated that it might have been due to distancing herself from an affair with a physician that began in Salt Lake City.[4]

In 1912 Mather moved to Los Angeles, where, according to her friend Billy Justema, she made a living primarily as a prostitute for several years.[5] Soon after moving there she joined the Los Angeles Camera Club and also became involved with a circle of self-styled anarchists who were followers of Emma Goldman. Within a year she was part of a growing Bohemian movement in the city that included actors, artists, writers and advocates for social and political change. Her interest in photography quickly blossomed, and by the following year at least one of her photographs had been exhibited in camera club salons in both America and Europe.[6] 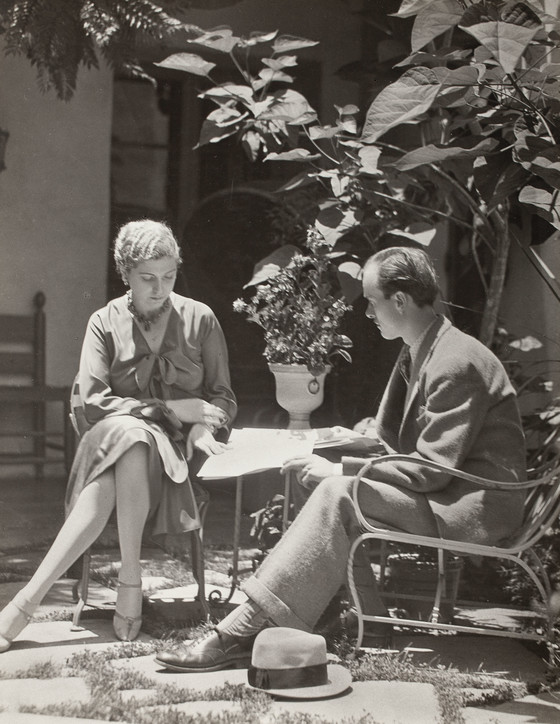 She met photographer Edward Weston in the autumn of 1913 when she went to his studio in nearby Tropico. Mather and Weston found they had many of the same photographic interests, and by both Weston's and Mather's accounts the two became intensely involved with each other within six months after they met. At the time, Mather was described as "maddening to the eye, the heart and whatever might be left of reason...distinctly marvelous and infuriating as an individual."[7]

Soon after they met Mather proposed that Weston, she and a small circle of friends that included Fred R. Archer form a new camera club, the Camera Pictorialists of Los Angeles. The club eventually became very influential, but Mather and Weston dropped out after only a year.[8] By that time Weston had begun to receive widespread national and international acclaim, and Mather's relationship with him became more intense as his fame grew.

In 1916 Mather moved to a boarding house in the Bunker Hill neighborhood, where she was said to become involved with a woman referred to only as "Beau"[9] Justema believes "Beau" was Mather's lover and patron, to the extent that soon after the two met Mather opened her first professional photography studio.[10] Although Mather's earliest known photograph dates from 1913, until she opened her studio there is very little record of her photographic output. The studio was in the small carriage house behind the Victorian Hildreth House at 375 South Hope Street (built in 1889, Hildreth House was demolished 1954). The address of the studio was 715 West Fourth Street. According to Billy Justema: "On Bunker Hill... just four blocks from the Philharmonic [then headquarted in the Auditorium Building at 5th and Olive] Margaret remodeled the carriage house a late Victorian masion into what was to become the most elegantly simple studio in the city. Although an uncluttered Japnese atmosphere was generally favored in current avant-garde circles, the opulent austerity at 715 West Fourth would still have been startling, with its rough, white plaster walls, its pale amethyst-colored walto-wall carpeting, and the huge French doors that opened on a high wooden deck that overlooked a terraced garden down which lavender mesembryantheum flowed from a group of three conical cypress trees until, at the lower terrace, the vivid ground-cover reached a long row of dwarf bamboo that led the eye to the ruins of a fanciful summerhouse. There were no pictures, hardly any furniture... the first impression a visitor received was that the occupant was either moving in or moving out. Margaret's flat bed disappeared into a recess behind low doors set flush with the wall and all one saw entering was a large, faintly opalescent V-shaped room (made so by a closed-off kitchen and bath occupying the nearest comer at the left side) with a pair of those chests of drawers the Japanese call tansu, a tall teak-hand mirror above a severely delicate side-table of teak and, a concession to comfort, several split-bamboo chairs and hour-glass stools in the room's center."

Either Justema did not know the real name of Mather's mysterious mentor, or he chose not to reveal it. It has been suggested that Mather's protector was Florence Reynolds, a woman from Chicago, who often visited Salt Lake City during Mather's adolescent years, and who made frequent visits to Los Angeles between 1915 and 1918. Reynolds was known to her friends as Ho, not Beau (spelled Bo). In a letter written in January 1916, Ma-Mie Cook informed her son, Jig Cook, that she and his ex-wife, Mollie Price, were back to Souther California and were enjoying the company of four women, including former Chicagoan Esther Mabel Crawford, an artist friend of Mather, who taught in the art department of the State Normal School. At the time she wrote her letter, Ma-Mie Cook was residing in the Sierra Madre foothills in a cabin belonging to Florence Reynolds.

Reynolds was born in Chicago in 1879. Her father was a successful insurance company executive and they lived in the Lakeview neighborhood. Shortly after giving birth to her, her mother died of tubercolosis and Florence suffered from a variety of maladies throughout her life and she was very small in stature, just few inches above four feet. She excelled in High School and at Northwestern University, where she graduated with honors in 1901. Florence's older sister, Hattie, married Dr. William F. Mack, a dentist in Salt Lake City, and Florence visited them often between 1900 and 1906. Reynolds was at the time emotionally involved with Jane Heap, and Heap referred to her as Tiny Heart. Around 1915, Hattie and William Mack relocated to Los Angeles, and Reynolds began to regularly travel back and forth to Los Angeles from Chicago. The Macks lived at 1523 Curson Street on the western fringes of Hollywood.

During her early years Mather worked in the pictorialist style. One of the first images she created after opening her studio was a soft-focus portrait, Miss Maud Emily, which was later published in Photograms of the Year. She also undertook a series of portraits for the avant-garde magazine The Little Review (managed by friends Margaret Anderson and Jane Heap), including poet Alfred Kreymborg and heiress Aline Barnsdall. Her involvement with the Bohemian circle in Los Angeles also expanded, and through these connections she became friends a growing circle of celebrities and intellectuals like Charlie Chaplin, Max Eastman and Florence Deshon.

By 1918 she was working regularly with Weston, and the two exchanged both stylistic ideas and photographic techniques. That same year she completed a series of portraits of the Chinese poet Moon Kwan that utilized strong shadows as artistic elements. Weston had first experimented with shadows as a dramatic design element in his portrait of Eugene Hutchinson in 1916, but Mather formalized this approach into a continuing stylistic element in her portraits for many years after that.

In 1921 Mather's and Weston's joint photographic interests reached the point that they entered into a semi-formal partnership. For most of that year they created a series of about a dozen photographs that they jointly signed – the only time in Weston's career that he was known to have shared credit with another photographer[12] During this same period she made several stunning portraits of Weston, including full-frame close-ups that capture his somewhat soulful expression.

The next year marked the beginning of an artistic style change for both Mather and Weston. There is no direct indication of who influenced whom, but photographer Imogen Cunningham, who knew both Weston and Mather well, said that in artistic matters, Mather was the teacher and Weston was the pupil[13]

In 1923 Weston became infatuated with photographer Tina Modotti and decided to travel to Mexico with her. Before he left he took a series of nude studies of Mather in the sand dunes at Redondo Beach, California. These images that bear a close resemblance to his more famous nudes of his second wife Charis Wilson taken 13 years later. After Weston left, Mather immediately expanded her career with a new group of portraits of famous artists, musicians and writers, including Pablo Casals, Rebecca West, Eva Gauthier, Ramon Novarro, Konrad Bercovici, and Richard Buhlig.[14]

It was during this same period that she became close friends with and repeatedly photographed the budding artist Billy Justema. Justema was nearly 20 years younger than Mather, and they formed a mutually beneficial and platonic relationship that lasted many years.[15]

Mather and Justema jointly applied for a Guggenheim Fellowship in 1928 for a proposal they called "The Exposé of Form". The application was not approved, and for the next two years Mather's interest in photography declined.

In 1930 Justema moved to San Francisco and through his connections was able to secure a one-person exhibition for Mather at the M.H. De Young Memorial Museum. When the exhibition opened, one reviewer referred to her (although erroneously) as "Margrethe Mather, San Francisco modernist."[16]

AAfter the exhibition Mather returned to Los Angeles and developed a long-lasting relationship with George Lipton, described as "a garrulous, hard-drinking man" she first met back in the early anarchist days. Lipton ran an antiques shop, and Mather worked part-time for him while pursuing her photography. Her health gradually declined over the next decade, and her interest in photography faded at the same time. In the early 1940s she was diagnosed with multiple sclerosis, an affliction that at that time was highly debilitating and degenerative. By then she and Lipton had developed a mutually caring relationship, although the true extent of it was never disclosed.

Mather died on Christmas Day 1952. The official death record stated her name as "Margaret Lipton" and her occupation as "housewife," two identities she never actually claimed or would have liked.[17] By that time Weston had destroyed most of his journals and notes from his early days in Los Angeles, and he mentioned her only briefly in his extensive published journal Daybooks.