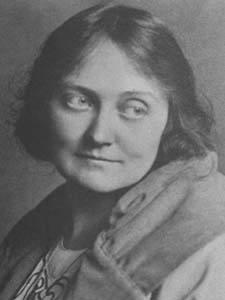 Born in Bradford, Pennsylvania, Barnsdall was the daughter of oilman Theodore Newton Barnsdall. T.N. Barnsdall and his father, Aline's grandfather, had been early participants in the Pennsylvanian oil rush of the late 1850s.[1] From humble beginnings the family amassed a fortune estimated at $15,000,000, with large land holdings in Oklahoma and California.[2]

As a young woman Barnsdall toured Europe with her father, developing an interest in feminism and radical causes. By 1913 she was producing experimental theater in Chicago. She's mentioned in Emma Goldman's autobiography Living My Life as a close friend who wrote out a $5000 check to ease Goldman's deportation to Russia.[3]

In February 1916 the he Little Review was now two years old and Margaret Anderson had just moved back to downtown Chicago, her lakefront interlude having come to a close. One day an heiress whom Margaret had impishly dubbed Nineteen Millions (Aline Barnsdall) was visiting the magazine offices. Margaret, of course, was hoping that her wealthy guest might be willing to part with a few pennies in the interest of “Art.” The courtship was well under way. Minutes earlier, Jane Heap had come in. A perfect stranger, she stood quietly to the side, big-boned and imposing, listening as Nineteen Millions spouted opinions. Jane watched with interest. Finally, letting out a tender laugh, she interjected a wry observation. Nineteen Millions glared at Jane with fury. Then she abruptly stomped out, muttering that, above all things, she “disliked frivolity.” Margaret’s reaction was just the opposite. She knew instantly that she wanted to live with this kind of frivolity forever. All that spring Margaret had been casting about for a housing solution to the summer. One day it occurred to her that Nineteen Millions had extended an open invitation to visit her in California. Margaret wrote immediately to say she was coming—she and her “helpmate” Jane Heap—choosing to overlook the minor matter of their earlier spat. Nineteen Millions was less forgetful. Margaret was of course welcome, she wrote; Jane Heap was emphatically not. Undeterred, Margaret insisted they go anyway. Though this time it was Margaret who stomped out in a huff, only moments after Nineteen Millions had pronounced Jane “odious” for a second time. Margaret never doubted their luck would turn.

In February 1917, her father died,[4] leaving her half of the assets of the Barnsdall Oil Company. By some accounts she received $3 million. On August 19, 1917, she became an unmarried mother by design, a scandalous choice for the time. Her daughter was born in Seattle, took her mother's surname, and was known as "Sugartop".[5] Also in 1917 she produced a season of Los Angeles Little Theater, engaging a young Norman Bel Geddes as set designer.[6]

She hired Frank Lloyd Wright to design a home for her and a vaguely defined "progressive theatrical community". This commission ultimately became the landmark Hollyhock House. Barnsdall bought the local 35-acre (140,000 m2) Olive Hill property in 1919. Construction began in 1919 continuing until she fired Wright in 1921. Almost immediately, she began plans to give it away. Extensive correspondence between Barnsdall and Wright in these years shows a close, sympathetic relationship. Finally, though, she grew very unhappy with the house's impracticalities and staggering cost overruns.[5]

Another longstanding feature of Olive Hill was Barnsdall's news-billboards meant to educate Angeleans about the Thomas Mooney case, the candidacy of Upton Sinclair for Governor of California, and her other causes. She was a guiding force and important financial contributor for the Hollywood Bowl, and a patron of architects Richard Neutra, Rudolph Schindler, and photographer Edmund Teske among others. Through the 1930s and 1940s, she continued to live on Olive Hill. She died in 1946. Barnsdall was also friends with Lucretia Van Horn and Galka Scheyer.