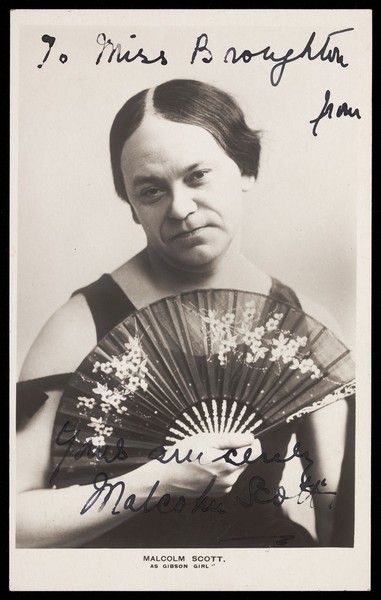 Malcolm Dalkeith Scott (March 7, 1872 - September 7, 1929) was an actor and writer, and female impersonator, known for How a Housekeeper Lost Her Character (1913). Scott's impersonations of famous female figures from history and popular culture were a big draw at major music halls in the days before World War I. His 'homely' appearance made him a good pantomime Dame, but he would also burlesqe some of the great beauties of the day. Among his female impersonations was Camille Clifford, voluptuous American-Belgian star of 'The Gibson girl', produced in London in 1903.

Malcolm Scott was born in Bloomsbury, Central London, on March 7, 1872, as Malcolm Dalkeith Scott. Malcolm Scott was the son of a Bloomsbury solicitor. Orphaned at age 14, He was sent to Canada, where he worked successively on a farm, in a jeweller's and on a railway. On doctor's orders, he was soon back in England and made his way to Margate, where he found work at the Theatre Royal. About 5 years later, he was working at a small German music hall, singing Millie Hylton's song, The Rowdy Dowdy Boys. Back in England, he appeared with several theatrical companies and, during the summer, with a party of pierrots at New Brighton in Meyerside. In the early years of the XX century, he determined to become a female impersonator, presenting "a feminine character of a higher tone than the average dame study". He started in the provinces, appearing in Cinderella at the Comedy Theatre in Manchester. By 1903 he was playing the halls, billed as “The Woman Who Knows”.  Scott’s repertoire included comedic numbers based on Salome, Queen Elizabeth I, Catherine Parr, Nell Gwynne, Boadicea, and a Gibson Girl. He toured American vaudeville in 1909 and 1916, and also performed in South Africa and Australia in addition to the U.K.

In 1912, Malcolm Scott took a 16 years old newspaper boy with him to Canada. He had been sitting in the Royal Court Hotel, Liverpool, when the boy tried to sell him a copy of The Liverpool Express. They began chatting and Scott learned that the boy was without both friends and family. Scott bought him some new clothes and a ticket for Canada and, once there, found him a job in Winnipeg.

In retirement, Malcolm Scott kept a sweetshop at Brighton in East Sussex, where Fred Barnes once paid him a visit: "As I entered the shop, Malcolm, attired in a white apron, was struggling with a bottle of sticky humbugs. A little boy, his mouth wathering in anticipation, was holding up a penny. There was something so incongruous about this picture of Malcolm that I burst out laughing. Malcolm looked up and saw me... "I've got enough humbugs in my shop", he rallied. Though he had now retired, it was the same Malcolm. At one time, he had a house in Hounslow. He called it Malcolm Scottage. He had to have his little joke."

Scott died in 1929 at The Pines in Burgess Hill, Sussex, an apparent cancer victim. His obituary appeared in The Glasgow Herald, Sep 7, 1929, recalling his early morning walks home after late-night parties, often in the company of fellow actor and occasional female impersonator George Mozart: “Mr Scott was a man of great generosity, and at one time it was his habit to purchase the stocks of coffee stalls on The Embankment and other parts of London and give away refreshments to the poor without disclosing his identity.”