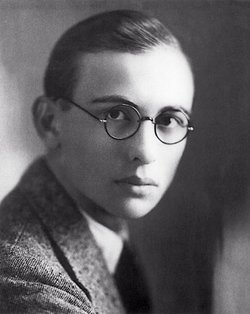 Rollie Lynn Riggs (August 31, 1899 – June 30, 1954) was an American author, poet, playwright and screenwriter born on a farm near Claremore, Oklahoma. His mother was 1/8 Cherokee, and when he was two years old, his mother secured his Cherokee allotment for him. He was able to draw on his allotment to help support his writing.[1] Riggs wrote 21 full-length plays, several short stories, poems, and a television script.[1]

He was educated at the Eastern University Preparatory School in Claremore, Oklahoma, starting in 1912. Riggs graduated from high school in 1917, and travelled to Chicago and New York. He worked for the Adams Express Company in Chicago, wrote for the Wall Street Journal, sold books at Macy's and swept out Wall Street offices. Returning to Oklahoma in 1919, he wrote for the Oil and Gas Journal. Travelling to Los Angeles, Riggs worked as an extra in the theatre, and a copyeditor at the Los Angeles Times, which published his first poem. Riggs entered the University of Oklahoma in 1920, and taught English there from 1922–1923.[2] However, Riggs became ill with tuberculosis during his senior year and did not graduate.[1] Riggs then moved to Santa Fe, New Mexico, to improve his health and soon joined a group of artists. However, in 1926 he moved back to New York, hoping to work in the Broadway theatres.

His first major production was a one-act play, Knives from Syria, which was produced by the Santa Fe Players in 1925.[2] He began teaching at the Lewis Institute, Chicago, while continuing to write. In 1928 he received a John Simon Guggenheim Fellowship and travelled to Europe. Riggs began writing his most famous play, Green Grow the Lilacs in the Café Les Deux Magots on the Left Bank in Paris.[2] He completed this play five months later in Cagnes-sur-Mer, in Southern France.[1]

He then lived in Santa Fe, Los Angeles, and New York, and was a screenwriter for Paramount and Universal Studios. Riggs was homosexual and was often a non-romantic escort for Hollywood actresses including Bette Davis and Joan Crawford.[3]

After serving in the military 1942–44 he worked on an historical drama for Western Reserve University, published a short story, "Eben, The Hound, and the Hare" (1952), and worked on a novel, The Affair at Easter, set in Oklahoma. He moved to Shelter Island, New York after he started receiving a steady income when Green Grow The Lilacs was adapted into the landmark musical Oklahoma! in 1943.