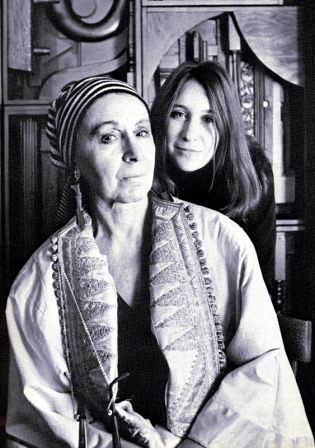 Born in the Poltava Governorate of the Russian Empire (present-day Ukraine), she emigrated with her family to the United States in the early 20th century. Nevelson learned English at school, as she spoke Yiddish at home.

By the early 1930's she was attending art classes at the Art Students League of New York, and in 1941 she had her first solo exhibition. A student of Hans Hofmann and Chaim Gross, Nevelson experimented with early conceptual art using found objects, and dabbled in painting and printing before dedicating her lifework to sculpture. Usually created out of wood, her sculptures appear puzzle-like, with multiple intricately cut pieces placed into wall sculptures or independently standing pieces, often 3-D. One unique feature of her work is that her figures are often painted in monochromatic black or white.[5] A figure in the international art scene, Nevelson was showcased at the 31st Venice Biennale. Her work is seen in major collections in museums and corporations. Nevelson remains one of the most important figures in 20th-century American sculpture.

When Alice Neel asked Nevelson how she dressed so beautifully, Nevelson replied "Fucking, dear, fucking", in reference to her sexually liberated lifestyle. The designer Arnold Scaasi created many of her clothes.[6] Nevelson died on April 17, 1988.[4]

In 2001 Edward Albee's Occupant, about the life of his friend, the famed sculptor Louise Nevelson, was produced Off-Broadway by the Signature Theater for a limited run starring Ann Bancroft.