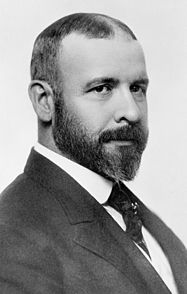 Louis Henry Sullivan (September 3, 1856 – April 14, 1924)[1] was an American architect, and has been called the "father of skyscrapers"[2] and "father of modernism".[3] He is considered by many as the creator of the modern skyscraper, was an influential architect and critic of the Chicago School, was a mentor to Frank Lloyd Wright, and an inspiration to the Chicago group of architects who have come to be known as the Prairie School. Along with Wright and Henry Hobson Richardson, Sullivan is one of "the recognized trinity of American architecture".[4] "Form follows function" is attributed to him although he credited the origin of the concept to an ancient Roman architect. In 1944, he was the second architect to posthumously receive the AIA Gold Medal.[5]

The LGBT community has largely come to embrace Chicago master architect Louis Sullivan (1856-1924) as one of its own, as typified by his inclusion in the publication Out and Proud in Chicago: An Overview of the City’s Gay Community (2008). While some people may balk at this embrace, the issue of inquiry into the lives of historic LGBT personages was cogently addressed by author Paula Martinac in her pioneering The Queerest Places: A Guide to Gay and Lesbian Historic Sites (1997): “Because lesbians and gay men have had to hide for such a long time…many of the rules of evidence simply don’t apply…In claiming people as gay, I was more interested in looking for how people lived their lives–their friends and community, their work, their relationships. And yes, I sometimes relied on rumor and gossip, which has been called the ‘oral history’ of queer people.”

"“…there is a good deal of evidence–some personal, some architectural–to suggest Louis Sullivan may have been homosexual.” " Robert C. Twombly, Louis Sullivan: His Life and Work (1986)

In Louis Sullivan: His Life and Work, biographer Robert C. Twombly refers to Sullivan’s exceptionally private and guarded personality, his preference for the company of men and the study of the male anatomy, his mentorships with such older men as architect John Edelmann, his intense involvement with the athletic Lotos Club in Chicago, his brief marriage at the age of 43 as his career was declining, and his complex architectural theories incorporating the “masculine” and “feminine” in his buildings’ form and ornament. Twombly notes that Sullivan “did not let people get too close,” that he refused to ”reveal himself or let others know who he was inside.”

Sullivan was a longtime admirer of Walt Whitman. Soon after discovering Leaves of Grass in 1887, he wrote to the poet: “You then and there entered my soul, have not departed, and never will depart. Be assured that there is at least one (and I hope there are many others) who understands you as you wish to be understood; one, moreover, who has weighed you in the balance of his intuition and finds you the greatest of poets.”