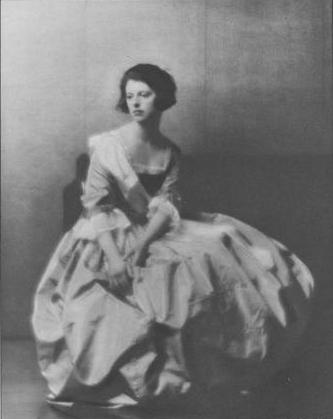 Hon. Lois Sturt (born 25 August 1900 – 18 September 1937), "the most beautiful debutante of her day", was one of the Bright Young Things of the 1920s. Later the lover of the Earl of Pembroke and the Duke of Kent. She married Evan Morgan, 2nd Viscont Tredegar.

SShe became famous as the most painted woman of England: at just 20 years old, she had already 7 portraits taken, including 4 sketches by Etienne Drian, studies in oil by Ambrose McEvoy, Olive Snell and Gerald Kelly and a self-portrait. All seven were exhibited in 1921 at the annual show of the National Portrait Gallery.[2] She attended the Slade School of Art and scandalizing society, she opened her own art studio in Chelsea. Wyndham Lewis said she was "the most beautiful debutante of her day" and Barbara Cartland said she was "fiery, impetuous, and with dark, flashing eyes."[3]

SShe was one of the Bright Young Things of the 1920s. She was among the founders of the notorious all-night treasure hunts, and she was fined for having driven her car at 51 miles an hour through Regent Park at 2 o'clock in the morning. When asked why, she said "I had to get there before some one else find the next clue."[4] Her close friends were: Tallulah Bankhead, Poppy Baring, Lady Victoria Bullock, Barbara Cartland, Madame Louis Cartier, Gladys Cooper, Nancy Cunard, Mona Dunn, Hon. Diamond Hardinge, Sonia Keppel, later Hon. Mrs Roland Cubitt, Anita Leslie, Eleanor Smith, Viola Tree. Dubbed as "bacchante", she dranke a lot and partied even more. She was one of the few female racehorse owners of her day. Moreover, she was an accomplished dancer and a fully trained pilot. Even if she was a trained artist, she in the end became an actress, one of the first of the Bright Young Things to make it. In 1921 she was a court lady The Virgin Queen (Lady Diana Cooper played Queen Elizabeth I) and in 1922 she was Nell Gwyn in The Glorious Adventure, the first British colour film.[3]

She became the lover of Reginald Herbert, 15th Earl of Pembroke, 20 years older than her, and then of Prince George, Duke of Kent, 2 years younger than her.[1] Other lovers include: Edward Boulenger, Duff Cooper, Tim Freeland, Augustus John, Luffy Loughborough.

Her papers include, other than engagement diaries, also love letters and an album of sexually explicit verses and jokes.[1]

She died on 18 September 1937 while in Budapest of a heart attack.[1] A subsequent enquiry confirmed the death was a consequence of an extreme diet that exacerbated an undiagnosed heart condition. Her ashes were brought back to England and buried in the rose garden of Crichel House.[3]

TThe Hon. Lois Sturt Papers are preserved at the National Library of Wales.[1]