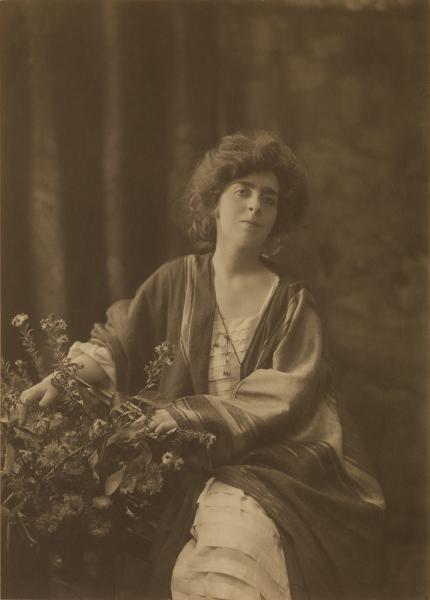 Laura Dreyfus-Barney (born Laura Clifford Barney; 30 November 1879, Cincinnati, Ohio – 18 August 1974, Paris, France) was a leading American Baháʼí teacher and philanthropist. In 1974, during an interview, Alice Roosevelt Longworth was reminded of a story of a friend of hers in the old days (the turn of the century) who, after being forbidden by her father to see a young man, dressed in men's clothes and cut her hair. The father remarked, "What an odd revenge." Longworth laughed heartily, "Homosexuality and lesbianism were very fashionable in those days," she said. "And it was quite acceptable. At least as far as I was concerned." It seems Margaret Cassini, Igor's mother and the daughter of a South American ambassador, had been a great friend of Alice Longworth's and they had taken a walk one day in the White House garden. Miss Cassini proceeded to tell young Alice that a mutual friend was saying horrid things about her. Alice asked what, and the friend replied that a certain Miss Alice Barney (later Laura Clifford Barney) was claiming to be in love with Alice. "I don't think that's nasty, why I think that's lovely, so nice. I'm so glad to hear she is," Mrs. Longworth recalled saying with a mischievous smile. Margaret Cassini apparently snorted with contempt, which pleased Alice enormously. "Still," she said, "usually I thought it better to keep away from joking about the lesbian thing since my father was President."

Laura Clifford Barney was the daughter of Albert and Alice Pike Barney. Albert Clifford Barney was the son of a manufacturer of railway cars and was of English descent. Alice was of French, Dutch and German-Jewish ancestry, and was a socially prominent artist from Washington, D.C. Laura and her elder sister Natalie Clifford Barney were educated by private tutors. Laura became a leading American Baháʼí teacher and philanthropist. She is best known for having compiled the Baháʼí text Some Answered Questions from her interviews with ʻAbdu'l-Bahá during her visit to ʿAkkāʾ, Palestine, between 1904 and 1906.[1]

She attended Les Ruches, a French boarding school founded by feminist Marie Souvestre. While continuing her studies in Paris, Laura met May Bolles (later Maxwell), a Canadian Baháʼí, and was converted to the faith in about 1900. Her mother converted soon afterward. In 1911, she married Hippolyte Dreyfus (married name Hippolyte Dreyfus-Barney).[2] Laura Barney financed the visit of the Persian Baháʼí scholar Mírzá Abu'l-Faḍl-i-Gulpáygání to the United States in 1901-04, in order to propagate the faith there, and helped to publish the translation of his Ḥojaj al-bahīya (Cairo, 1342/1925; tr. Ali-Kuli Khan as The Baháʼí Proofs, New York, 1902; 2nd ed., ed. J. R. I. Cole, Wilmette, Ill., 1983). In 1904 she visited ʻAbdu'l-Bahá in ʿAkkāʾ, Palestine, where she remained about two years, acquiring a working knowledge of Persian and becoming an intimate of his household. During that time she arranged to have ʻAbdu'l-Bahá's answers to her questions, mainly on philosophy and Christian theology, recorded by his secretaries. She collaborated with her future husband, Hippolyte Dreyfus, on the editing and translation of this work (al-Nūr al-abhā fīmofāważāt ʻAbdu'l-Bahá, Leiden, 1908; tr. L. C. Barney and H. Dreyfus as Some Answered Questions, London, 1908;[3] tr. H. Dreyfus as Les leçons de Saint Jean d'Acre, Paris, 1909). In 1905-06 she visited Persia, the Caucasus, and Russia with Dreyfus. After their marriage in April 1911, when they both adopted the surname Dreyfus-Barney, she traveled extensively with him. Both Laura and Hippolyte Dreyfus-Barney played a vital role in ʻAbdu'l-Bahá's successful visits to the West. Their intimate and personal relationship with him is unquestioned. Even though Hippolyte accompanied ʻAbdu'l-Bahá more so than Laura and translated many of his speeches to French. Nonetheless, Laura's role is unique in her special bond she developed through her travels to Akka during her youth and later as his host in Paris. Her proficiency in Persian language is another aspect that was unique at the time for a woman. ʻAbdu'l-Bahá's first visit to Paris in September 1911 was hosted by Laura and her husband. They also traveled to London and acted as his interpreters. They were his "confidantes." ʻAbdu'l-Bahá's next visit to the west and the US took place in 1912. Laura was present again in New York. New Jersey and Washington, DC. Upon his return to London, both Laura and Hippolyte were present. Their last visit to Akka to visit ʻAbdu'l-Bahá was in 1921, the same year that he died.[4] Dreyfus-Barney was active in the International Council of Women from the 1920s to the 1960s and was its representative to the League of Nations and then later worked connecting the United Nation's Children's Fund with various NGOs after World War II.[5] Between these, during World War I, Dreyfus-Barney served in the American Ambulance Corps (1914-15), and the American Red Cross (1916-18) in France, and helped to establish the first children's hospital in Avignon (1918). For her lifetime of services she was named chevalier (1925) and officer (1937) of the French Légion d'Honneur. There is a copy of her unpublished memoirs in the Baháʼí national archives in France.