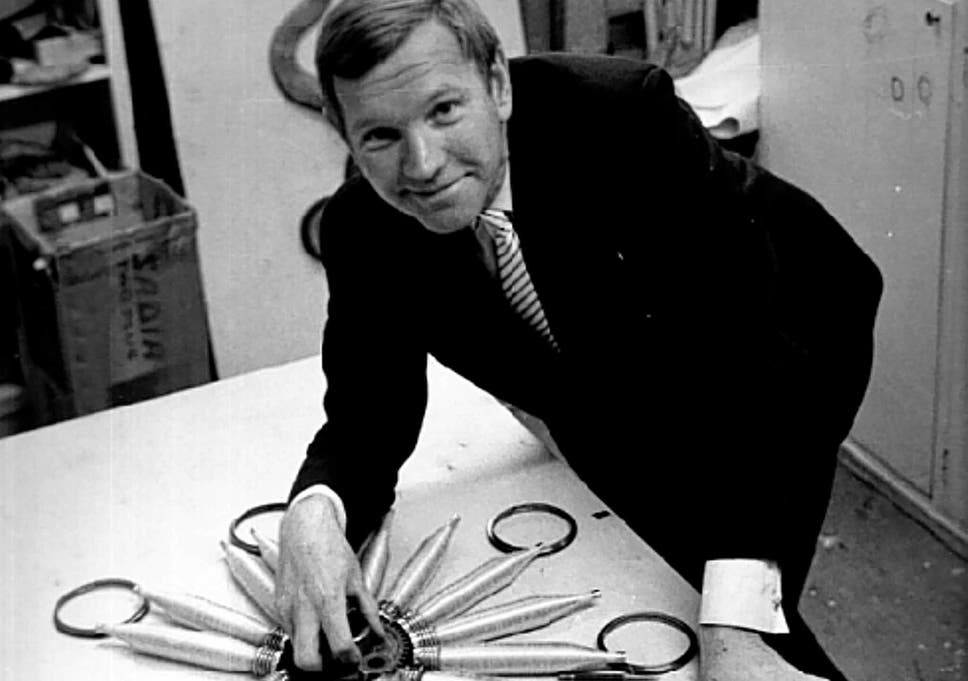 Kenneth Partridge (August 24, 1926 – December 7, 2015) was the interior design mastermind behind virtually every society party and pop star home of the 1960s, most notably for Ringo Starr and John Lennon of the Beatles.

When Ringo and his first wife, Maureen, bought a flat in Montagu Square in London, Partridge decorated it with purple watered-silk wallpaper, silk curtains and lead-streaked mirrors. The Starrs did not live there for long, however, soon renting it out to a succession of tenants, including Jimi Hendrix who stayed there from December 1966 to the middle of 1967, when Starr evicted him for throwing cans of paint over the walls and curtains while on an acid trip.

Partridge also worked on John Lennon’s Kenwood, a mock-Tudor country house on the St George’s Hill estate in Weybridge which he had bought in 1964 for £20,000. The singer – who had spent £40,000 (the equivalent of £724,000 in 2015) on renovations to house and grounds – had been impressed by Partridge’s design work on Beatles manager Brian Epstein’s penthouse flat in Knightsbridge and his work for a party thrown by Epstein before their first tour of the United States.

He therefore gave Partridge a free hand. But as Lennon’s first wife, Cynthia, recalled, “We liked some of the lavish designs, but they weren’t what we’d have chosen... The results in one room almost gave John apoplexy: when he came home to find the Sunroom, a bright room with lots of windows, swathed in dark green material, like a bizarre wedding marquee, he was furious. He tore it down then and there.”

Nevertheless, Lennon rewarded each member of Partridge’s team with one of his ties at the end of the job, while Partridge himself was given a pair of Lennon’s Cuban-heeled boots.

Partridge’s favourite commissions were for parties, of which possibly the most spectacular was the 80th birthday party in 1991 of the couturier Neil “Bunny” Roger, for which he created a Dante-esque “inferno” from which the host emerged through fire to greet his guests, with Partridge, decked out in red and armed with a trident, in the role of devil.

Kenneth Alexander Partridge was born on August 24 1926 and brought up in Brockley, south London. His father was an engineer and works manager at Electro Dynamic, St Mary Cray in Kent, where the family moved in 1935.

The family lived modestly; Kenneth remembered the cat’s meat man pushing his product through letter-boxes on the end of a steel spike.

Partridge’s artistic talent was spotted at school and he entered the Bromley School of Art in 1940. After graduation and a short period with the advertising agency J Walter Thompson, in 1944 he was called up as a “Bevin Boy”, working as a miner in Wales. Later he was posted to the RAF.

After the war, he was hired by Natasha Kroll, display director of Simpsons of Piccadilly, later recalling his horror when she dispatched him to an antiquarian bookseller with an order for large books containing engraved plates, only to rip the books apart so that the plates could be used in window displays.

He went on to work for Elizabeth Arden in Bond Street and Jaeger on Regent Street where, in 1963, he won an award for the best UK window design.

By 1958 he was also commissioned by the Incorporated Society of London Dress Designers to create the settings for a new annual fashion show of current British designs to be held in the presence of the Queen, the Queen Mother and Princess Margaret.

He became lifelong friends with the royal dress designer Hardy Amies, designing his first catwalk show of ready-to-wear menswear, held at the Savoy in 1961, which culminated in a giant papier maché gloved hand waving its approval. Other commissions for Amies included an “ice party” at the rink at Queensway, Bayswater, which Partridge decked out with sleighs and frosted trees.

During the late 1960s Partridge created “flying fashion shows” for Norman Hartnell, financed by the textile manufacturers Reid & Taylor, which involved removing the seats from an aeroplane and holding catwalk shows at airports around Europe.

He designed many other shows for Reid & Taylor, including at Castle Howard, Yorkshire, for which he arranged a fleet of Rolls-Royces, most of them hired from the Co-operative Funeral Service, to transport guests from the railway station.

In 1968, Partridge appeared in Make It My Place, an early BBC make-over series in which volunteers submitted their homes to a “contemporary” redesign.

Partridge’s work for the Beatles included the interiors of the short-lived Apple boutique in Baker Street, while other clients included the shoe manufacturer Edward Rayne, the theatre and film designer Oliver Messel, the photographer Norman Parkinson (for whose house in the West Indies he designed a multi-coloured glass wall using the bases of bottles), and Laurence Olivier.

Many of his clients became part of a wide and diverse circle of friends, drawn mainly from the worlds of fashion, design, theatre and film, and he and his partner of 65 years, Derek Granger, a journalist and film producer, were popular house guests. Abroad, they stayed with Claudette Colbert. In Britain they stayed with Laurence Olivier in Sussex.

In the 1990s Partridge befriended the elderly cabaret singer Elizabeth Welch, helping her to move into the Denville Hall retirement home. While clearing out her house, he came across a box of pre-war share certificates from solid companies given to her by an admirer, which meant that she became moderately well-off again.

Away from his design work, Partridge worked for many years as a prison visitor, only giving up as ill health set in.

He is survived by Derek Granger and a sister.