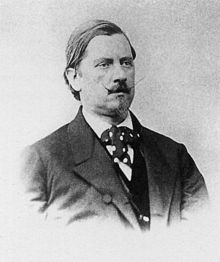 Karl-Maria Kertbeny or Károly Mária Kertbeny (born Karl-Maria Benkert) (Vienna, February 28, 1824 – Budapest, January 23, 1882) was an Austrian-born Hungarian journalist, memoirist, and human rights campaigner. He is best known for coining the words heterosexual and homosexual.[1] The word ‘Homosexualität’ itself was first used, along with ‘Homosexualisten’, in a letter to Karl Heinrich Ulrichs in 1868 and then in two pamphlets (Leipzig, 1869).

The Benkert family moved to Budapest when he was a child—he was equally at home in Austria, Germany and Hungary. Hungarian writer and literary historian Lajos Hatvany has described him in these terms: "This moody, fluttering, imperfect writer is one of the best and undeservedly forgotten Hungarian memoir writers." He translated Hungarian poets' and writers' works into German, e.g., those of Sándor Petőfi, János Arany and Mór Jókai. Among his acquaintances were Heinrich Heine, George Sand, Alfred de Musset, Hans Christian Andersen, and the Brothers Grimm.

As a young man, while working as a bookseller's apprentice, Benkert had a close friend who was gay. This young man killed himself after being blackmailed by an extortionist. Benkert later recalled that it was this tragic episode which led him to take a close interest in the subject of homosexuality, following what he called his "instinctive drive to take issue with every injustice."

After a stint in the Hungarian army, Benkert made a living as a journalist and travel writer, and wrote at least twenty-five books on various subjects. In 1847, he legally changed his name from Benkert to Karl-Maria Kertbeny (or Károly Mária Kertbeny), a Hungarian name with aristocratic associations. He settled in Berlin in 1868, still unmarried at 44. He claimed in his writings to be "normally sexed". However, his diaries list a self-censored string of encounters with youths and men (“young barber lad";"very much in love with the lad"; "I have done it"), and recurring fear following the arrest of Karl Heinrich Ulrichs with whom he corresponded,("Awful days!...Horrible nightmares. I have burnt all the dangerous letters"), which suggest he was secretly homosexual.[2]

He began to write extensively on the issue of homosexuality, motivated, he said, by an "anthropological interest" combined with a sense of justice and a concern for the "rights of man." In 1869, he anonymously published a pamphlet entitled Paragraph 143 of the Prussian Penal Code of 14 April 1851 and Its Reaffirmation as Paragraph 152 in the Proposed Penal Code for the North German Confederation. An Open and Professional Correspondence to His Excellency Dr. Leonhardt, Royal Prussian Minister of Justice.

A second pamphlet on the same subject soon followed. In his pamphlets, Kertbeny argued that the Prussian sodomy law, Paragraph 143 (which later became Paragraph 175 of the penal code of the German Empire), violated the "rights of man." He advanced the classic liberal argument that consensual sexual acts in private should not be subject to criminal law. Recalling his young friend, he argued strongly that the Prussian law allowed blackmailers to extort money from gay people and often drove them to suicide.

Kertbeny also put forward the view that homosexuality was inborn and unchangeable, an argument which would later be called the "medical model" of homosexuality. This contradicted the dominant view up to that time, that men committed "sodomy" out of mere wickedness. Gay men, he said, were not by nature effeminate, and he pointed out that many of the great heroes of history were gay. With Heinrich Hössli and Karl Heinrich Ulrichs, he was among the first writers to put these now-familiar arguments before the public.

After publishing his two important pamphlets, Kertbeny faded from the scene. In 1880, he contributed a chapter on homosexuality to Gustav Jäger's book Discovery of the Soul, but Jäger's publisher decided it was too controversial and omitted it. Nevertheless, Jäger used Kertbeny's terminology elsewhere in the book.

The German sex researcher Richard von Krafft-Ebing, in his Psychopathia Sexualis (1886), borrowed the terms homosexual and heterosexual from Jäger's book. Krafft-Ebing's work was so influential that these became the standard terms for differences in sexual orientation, superseding Ulrichs' word Urning.

Kertbeny did not live to see the wide acceptance of his terminology or his ideas. He died in Budapest in 1882 at age 58.

His gravesite was traced in 2001 by sociologist Judit Takács (see the link below) who conducted extensive research on his life. It is located in Kerepesi Cemetery in Budapest, the final resting place of numerous prominent Hungarians of the nineteenth and twentieth centuries. The gay community set a new tombstone on it, and since 2002 it has been a recurring event at Hungarian gay festivals to place a wreath at his grave.