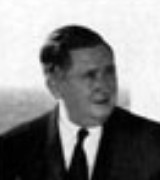 John Benjamin Clark Watkins (3 December 1902 – 12 October 1964) was a Canadian diplomat and scholar who served as Canadian ambassador to the Soviet Union from 1954 to 1956.[1][2] Describing Watkins as "sophisticated, erudite and fluent in Russian", Michael Dobbs of The Washington Post wrote that he was the "perfect ambassador" to Moscow.[3] He is credited with organizing a historic meeting between Soviet Premier Nikita Khrushchev and Canadian External Affairs Minister Lester B. Pearson.[1]

Born in Norval, Ontario,[1] Watkins was the first child of John Watkins and Jane Isabella Clark.[4] He had two sisters, Elizabeth Mary Jean and Isabella.[5] Watkins was educated at the University of Toronto and at Columbia and Cornell Universities. Later he traught English at Queen's and Cornell and at the University of Manitoba. In 1930 he joined the America-Scandinavian Foundation in New York City as translator and became in charge of students and later secretary. In 1946 he joined the Department of External Affairs as a first secretary and was head of the European division until his appointment on September 1, 1948 as charge d'affaires in Moscow. He was posted a minister to Oslo in 1952 and two years later became Canada's first Ambassador in the Soviet capital. Since the hiatus of 1946 he stayed there for two years, then returned to Ottawa as Assistant Undersecretary of State for external affairs. In 1958 he was posted to Europe again as Ambassador to Copenhagen. His tour of duty there ended in 1960.

In 1954, Watkins met a young man named Kamahl in a Muslim area of one of the southern republics of the Soviet Union and invited him back to his hotel room.[20] The hotel staff likely observed the pair entering Watkins' room.[20] A few months later, Watkins received a postcard from Kamahl who stated he would be visiting Moscow.[20] Watkins entertained Kamahl in Moscow, and the two men engaged in a brief romantic affair consummated in the younger man's hotel room.[20] As he did with every other encounter, Watkins dutifully reported to Quebec his encounters with Kamahl and described him as a young man who had doubts about the Soviet system.[21] The only thing he failed to report was the homosexual aspect of their relationship.[21] Unbeknownst to Watkins, Kamahl's visit was staged by the KGB and the two men were photographed together in Kamahl's room.[20] The KGB sought to exploit Watkins' indiscretion not by blackmailing him, but rather by manipulating him to become an agent of influence by enveloping him in a "debt of gratitude".[22] In contrast to his first post in Moscow, he found himself enjoying access to top officials within the Ministry of Foreign Affairs and invitations to social events that other Western Bloc ambassadors could not get.[23] All of this was planned by the KGB.[23]

In August 1962, two British officers from MI5 and MI6 who had assisted the United States Central Intelligence Agency in the debriefing of Soviet defector Anatoliy Golitsyn had their opportunity to question Golitsyn at a safehouse in Washington, D.C., but were unable to discover any new leads.[44] The investigation initially focused on David Johnson, the Canadian ambassador to the Soviet Union from 1956 to 1960, who resigned his position after a previous investigation forced him to admit his homosexuality.[47] Although Johnson had been a ambassador in the 1950s, other details from Golitsyn's leads did not match up.[40] Additional review suggested that the unidentified ambassador could be Watkins, but the investigation stalled with no firm evidence against either him or Johnson.[40]

In September 1963 in London, Soviet writer Yuri Krotkov defected to the West. Krotkov revealed that he had cooperated with the KGB years earlier in a seduction/compromise operation against Maurice Dejean, the French ambassador to the USSR, and his wife, and stated he had learned of a similar entrapment operation against a homosexual Canadian ambassador.[48] Like Golistyn, Krotkov said he did not know the ambassador's name, but he confirmed that the diplomat had fallen into the trap and the timeline he presented seemed to overlap with Watkins' post in Moscow.[32]

After verifying Watkins' statements with the lengthy dispatches he had written in Moscow nearly ten years earlier, Bennett and Brandes were convinced that the former ambassador had been truthful and that the KGB attempt to blackmail him had failed.[53]

On the evening of 12 October 1964, the interrogation was essentially finished when Watkins, while reminiscing about his diplomatic career, suffered a heart attack and died instantly.[54] After feeling no pulse and attempting chest compressions, Bennett and Brandes telephoned for help.[55] Two police officers from Saint-Laurent, Quebec, Remy Martin and Pierre Lemire,[56] and two ambulance attendants responded to their call.[55][d] Gus Begalki, the RCMP Security Service's senior non-commissioned officer, then convinced the Saint-Laurent police chief to keep the matter quiet out of concern that publicity regarding Watkins' death might allow the KGB to take countermeasures for the intelligence the Security Service had acquired regarding their operating methods.[55]

Coroner Marcel Trahan ruled that Watkins had an "unforeseeable" death due to heart attack,[57][56][55] and his report stated that Watkins died in the company of "friends" awaiting a flight to England.[58] The report listed Brandes as the only witness and said he should be considered "a friend of the deceased".[57][55] Brandes' was not identified as a member of the RCMP and Bennett's name was not mentioned.[57]

Watkins and his friend, fellow diplomat E. Herbert Norman, were the inspiration for "Harry Raymond", the central character in Timothy Findley's play The Stillborn Lover (1993).[68]