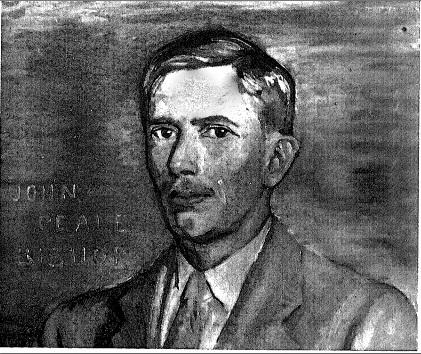 Bishop was born in Charles Town, West Virginia, to a family from New England, and attended school in Hagerstown, Maryland and Mercersburg Academy. At 18, Bishop fell victim to a severe illness and temporarily lost his sight for some time. He entered Princeton University in 1913, at age 21, where he became friends with Edmund Wilson and F. Scott Fitzgerald. He graduated from Princeton in 1917 and served with the army for two years in Europe. He was the model for the character Thomas Parke D'Invilliers in Fitzgerald's first novel, This Side of Paradise.[1] Upon returning to the United States, he wrote poetry as well as essays and reviews for Vanity Fair in New York City. In 1922 he married Margaret Hutchins, and they soon moved to France, where they lived until 1933, punctuated by one stint for Paramount Pictures in New York (1925–26). While in France they bought the Château de Tressancourt at Orgeval, Seine et Oise, near Paris, where they raised three sons. In 1933 Bishop's family returned to the United States, residing first in Connecticut, then New Orleans, and finally in a house on Cape Cod. His novel Act of Darkness, based on the true story of the rape of a prominent Charles Town social figure by a local Charles Town man, caused a scandal in the town when it was published.[1] He became chief poetry reviewer for The Nation (1940). In 1941-2 he served as publications director in the Office of the Coordinator of Inter-American Affairs, and was then invited to be resident fellow at the Library of Congress. He died within a few months of his appointment, on April 4, 1944, in Hyannis, Massachusetts.