Jeanne Mammen (21 November 1890 – 22 April 1976) was a German painter and illustrator of the Weimar period. Her work is associated with the New Objectivity and Symbolism movements. She is best known for her depictions of strong, sensual women[1] and Berlin city life.[2] The majority of women in German-speaking Europe associated with innovative arts and literature were married or engaged in significant heterosexual relationships, although few had children. Some lived unconventionally: Hannah Hoch was bisexual; painter Elfriede Lohse-Wichtler was married briefly, then lived highly unconventionally, including a period with Gypsies and, reputedly, female partners. No well-known writer lived openly as a lesbian. Gertrud Kolmar, Annette Kolb, Jeanne Mammen, Milly Steger, Lotte Laserstein, and Nelly Sachs never married.

Jeanne Mammen was born in Berlin, the daughter of a successful German merchant. She was raised and educated in Paris, and studied painting in Brussels and Rome. Her early work, influenced by Symbolism, Art Nouveau, and the Decadent movement, was exhibited in Brussels and Paris in 1912 and 1913.[3]

In 1916 she and her family fled Paris to avoid internment. While her parents moved to Amsterdam, Mammen chose instead to return to Berlin. She was now financially on her own for the first time, as the French government had confiscated all of her family's property. For several years Mammen struggled to make ends meet, taking any work she could find, and spending time with people from different class backgrounds. These experiences and newfound sympathies are reflected in her artwork from the period.[1] 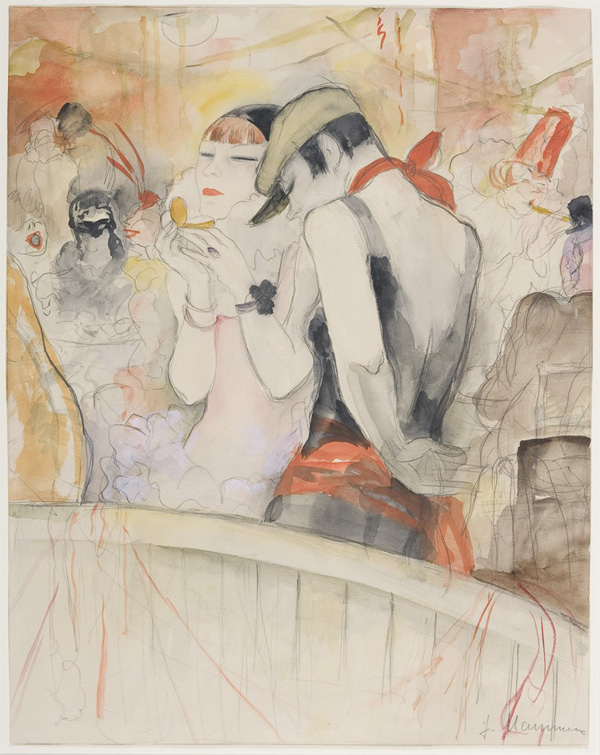 In time she was able to find work as a commercial artist, producing fashion plates, movie posters, and caricatures for satirical journals such as Simplicissimus, Ulk,[3] and Jugend.[4] In the mid-1920s she became known for her illustrations evoking the urban atmosphere of Berlin. Her drawings were often compared to those of George Grosz and Otto Dix.[5] Throughout the late 1920s and early 1930s she worked mainly in pencil with watercolor washes, and in pen and ink.[4]

In 1930 she had a major exhibition in the Fritz Gurlitt gallery.[6] Over the next two years, at Gurlitt's suggestion, she created one of her most important works: a series of eight lithographs illustrating Les Chansons de Bilitis, a collection of lesbian love poems by Pierre Louÿs.[6]

In 1933, following her inclusion in an exhibition of female artists in Berlin, the Nazi authorities denounced her motifs and subjects as "Jewish", and banned her lithographs for Les Chansons de Bilitis.[6] The Nazis shut down most of the journals she had worked for,[7] and she refused to work for those that complied with their cultural policies.[6] Until the end of the war she practiced a kind of "inner emigration". She stopped exhibiting her work and focused on advertising. For a time she also peddled second-hand books from a handcart.[7]

In the 1940s she began experimenting with Cubism, a risky move given the Nazis' condemnation of abstract art as "degenerate". After the war she took to collecting wires, string, and other materials from the streets of bombed-out Berlin to create reliefs. In the late 1940s she began exhibiting her work again, as well as designing sets for the Die Badewanne cabaret. She created abstract collages from various materials, including candy wrappers. In the 1950s she adopted a new style, combining thick layers of oil paint with a few fine marks on the surface.[8]

In the 1970s there was a resurgence of interest in Mammen's early work as German art historians, as well as art historians of the women's movement, rediscovered her paintings and illustrations from the Weimar period.[8] In 2013 her later, more abstract work was featured in "Painting Forever!", a large-scale exhibition held during Berlin Art Week.[2] In 2017–18, the Berlinische Galerie mounted a major exhibition of Mammen's work, titled, "Jeanne Mammen: Die Beobachterin: Retrospektive 1910–1975" (Jeanne Mammen: The Observer: Retrospective 1910–1975), which included more than 170 works in various media, covering the period from the 1920s to her late work in the 1960s and beyond. The show was conceived as an update to a show mounted by the Galerie at the Martin Gropius Bau in 1997, which featured primarily works from the 1920s.[9]