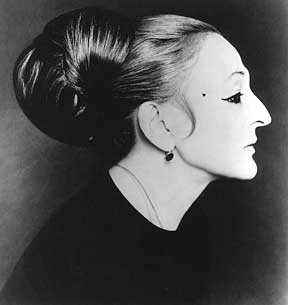 Irene Sharaff (January 23, 1910 – August 10, 1993) was an American costume designer for stage and screen. Her work earned her five Academy Awards and a Tony Award.

Sharaff was born in Boston and studied at the New York School of Fine and Applied Arts, the Art Students League of New York, and the Académie de la Grande Chaumière in Paris.

After working as a fashion illustrator in her youth, Sharaff turned to set and costume design. Her debut production was the 1931 Broadway production of Alice in Wonderland, starring Eva Le Gallienne. Her use of silks from Thailand for The King and I (1951) created a trend in fashion and interior decoration.[1]

She also designed sets and costumes for American Ballet Theatre, the New York City Ballet, and the Ballet Russe de Monte Carlo, and contributed illustrations to fashion magazine's such as Vogue and Harper's Bazaar. Among her Broadway design credits are Idiot's Delight, Lady in the Dark, As Thousands Cheer, A Tree Grows in Brooklyn, Flower Drum Song, and Jerome Robbins' Broadway.

The TDF/Irene Sharaff Lifetime Achievement Award was named for Sharaff. She was its first recipient in 1993. The award is now bestowed annually to a costume designer who, over the course of his or her career, has achieved great distinction and mastery of the art in theatre, film, opera or dance.[2][3]

Irene Sharaff died in New York City of congestive heart failure, complicated by emphysema, at the age of 83.[1] Sharaff bequeathed her collection of books, along with that of her partner, Mai-Mai Sze, to the New York Society Library.[4]