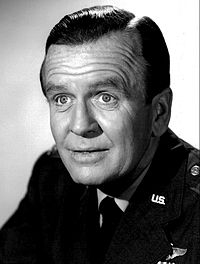 Rorke was born in Brooklyn, New York in 1910.[1] He was the son of screen and stage actress Margaret Rorke (née Hayden),[note 1][1] and he took his stage forename from her maiden name.[2]

He attended Brooklyn Preparatory School, a Jesuit school, where he served as president of the Dramatics Society and the Student Government and a member of the Omega Gamma Delta Fraternity. He continued his education at the American Academy of Dramatic Arts[3] and began his stage career in the 1930s with the Hampden Theatrical Company. During World War II, he enlisted in the United States Army, where he made his film debut in the musical This is the Army starring Ronald Reagan, for which he was uncredited as the stage manager and as a soldier in the background.

Following the war, he left the Army and worked in small parts on Broadway, finally returning to Hollywood for the film Lust for Gold (1949), again uncredited. However, it was an opening, and in later films, beginning with Rope of Sand, he is listed in the credits, although he again shows up uncredited in the films Kim (1950) and The Magnificent Yankee (1950), as well as a couple of later films such as the Academy Award-winning An American in Paris (in those days, small roles were often uncredited). He played the role of crooked businessman and murderer Arne Mason in episode 90 "Word of Honor" of the television series The Lone Ranger in 1952. He also appeared in episode 125 entitled "The Perfect Crime" of that television series in 1953.

He played several guest roles on television, winning the role of Colonel Farnsworth in the short-lived 1964 ABC sitcom No Time for Sergeants,[4]:769 based on the Andy Griffith film of the same name, but starring Sammy Jackson. He also guest-starred on three episodes of CBS's Perry Mason between 1960 and 1963. In his first role, he played the title character, Jay Holbrook, in "The Case of the Flighty Father" and as Walter Caffrey in "The Case of the Violent Vest". Rorke also appeared in television programs such as I Love Lucy, The Twilight Zone, " Thriller" where he also plays a psychologist, Peter Gunn, The Andy Griffith Show, Barnaby Jones, Mr Ed, Wonder Woman, Burns and Allen, The Beverly Hillbillies, and The Love Boat.

Rorke was best known for his role as Dr. Bellows, the NASA medical officer in the television sitcom I Dream of Jeannie. Bellows was constantly trying to figure out why Tony Nelson (Larry Hagman), an astronaut under Bellows' supervision, often behaves strangely, and to decipher the madcap antics, but he never figures out what is actually going on. Bellows usually winds up making himself look like a fool in front of his own superiors. Rorke's last film was reprising his role in the television reunion movie I Dream of Jeannie... Fifteen Years Later (1985).

In the early 1980s, Rorke returned to the theater, making a number of live stage appearances. He acted in Mr. Roberts in St. Louis, Missouri,[5] and also starred at the old Showboat Dinner Theatre in St. Petersburg, Florida.

Rorke was "unashamedly gay", as Jeannie co-star Barbara Eden stated in her 2011 biography Jeannie Out of the Bottle. She commented that Rorke "and his partner, director Justus Addiss (Mister Ed, among others), lived together for many years in Studio City, along with their menagerie of dogs" until his death in 1987 at age 76. The couple would often invite the cast over for parties.[2]

Eden described Hayden as a "prince" who was a good friend of all and always managed to keep up the spirits of the I Dream of Jeannie cast, often in difficult circumstances.[2]