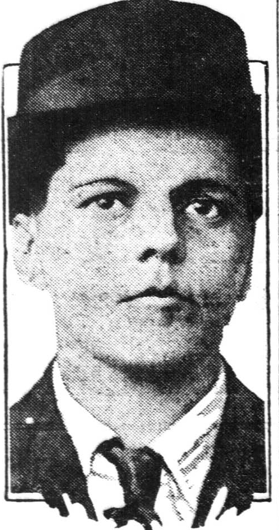 Harry Allen or Harry Livingston (December 27, 1882 – December 27, 1922) was an American transgender man from the Pacific Northwest who was the subject of ongoing sensationalist local and national newspaper coverage from 1900 until his death in 1922.[3]  Miriam Van Waters wrote about him in The adolescent girl among primitive peoples (1914), Allen appears as "Case I" under the initials H.A.

The newspapers covered his petty crimes associated with life on the margins of society such as prostitution and alcohol offenses. Allen was born in Washington to Robert P. Pickerell (1841-1920) and Jennie Gordon (born 1855, Indiana).[1] He received disproportionate attention in reaction to his unapologetic rejection of a female gender assignment and refusal to conform to social demands that he dress and behave according to female norms.[3][4] These titillating and exploitative stories — "great police blotter copy" — consistently referred to him with she/her pronouns and used his dead name, Nell Pickerell, even while also reporting that Allen did take offense at this, and was outspoken in his insistence that he not be, in modern terms, misgendered.[3] His name had been Harry Livingston from around 1900 until 1911, and then Harry Allen after.[5][6]

In 1901, jealous of Harry's love, Dolly Quappe killed herself by swallowing the contents of a vial of carbolic acid. Death came two hours later. The girl was a waitress. Dolly Quappe came to Seattle from her home in Portland. Her real name was Martha Quappe. She had been in Seattle but two days when she met Harry. At a dance in Ballard Harry was suspected of stealing an overcoat. Dolly learned of this and wrote a letter warning Harry to dispose of the coat. The letter was lost on the street. It came into the possession of Officer Hubbard and Harry was arrested. At headquarters he told Jailer Corbett that Dolly Quappe did not know about him, and laughed over the matter as a good joke. He was released, no complaint of theft being made against him. At about this time a quarrel came. During the past two years she was devoting her time and attention to Mabel Lacke. Dolly heard of this and reproached Harry with it. She even went so far as to threaten Harry's life, swearing that she would then kill herself. During a violent quarrel she tore from Harry's watch chain a little charm on which was Mabel Lacke's picture. This led to an estrangement and was the indirect cause of her suicide.

In March, 1902, Harry was arrested after another “young woman of respectable parentage” committed suicide after discovering “Harry Livingstone” was a woman.

A third of Harry’s girlfriends shot herself in Nov., 1903, although it looks like she survived. But Harry became even more notorious when the Seattle Star printed a photo of him with “Black Jack” Morse, “one of the most notorious and desperate criminals of the west.” Morse had been shot dead by a policeman in 1900 — and the photo with Harry was in his pocket when he died.

By 1911, Harry had changed her nom de plume to Harry Allen and was charged with selling liquor to native Indians near Spokane. In 1912, he was jailed in Portland for being a “white slaver,” period slang for living off the avails of a prostitute.

When not in the hands of police, he was arrested for about everything, from disorderly conduct to highway robbery, he drove a truck, worked in a poolroom, and tended bar. He worked as a bartender in Tunnel City, Wash., which a correspondent for the St. Louis Post-Dispatch dubbed “the wickedest railway camp in America.” He had a son about this time, who was raised by his parents. Allen died of syphilitic meningitis in 1922, at the age of 40.[1]