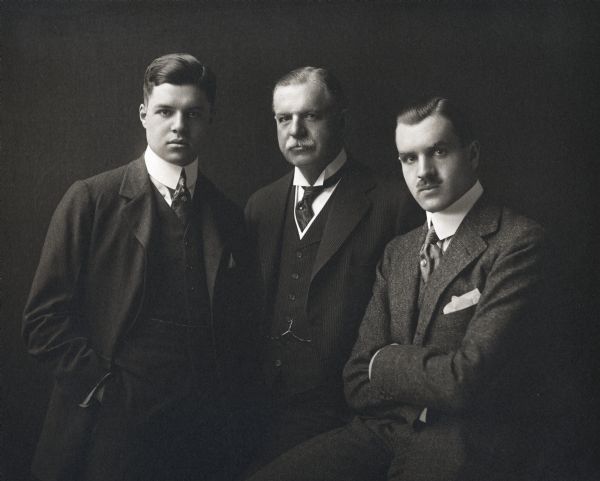 Gordon McCormick was born in Lake Forest, Illinois on 21 Jun 1894 to Cyrus H. Mccormick Jr (1859 - 1936), the president of the McCormick Harvesting Machine Company from 1884 to 1902, and Harriet Bradley Hammond (1862 - 1921). He attended Hotchkiss and Lake Placid Schools, and entered Princeton with the freshmen class of 1913. During that year he played on the freshman football squad, but thereafter turned his interest to the Triangle Club, in which he became a "chorus man", and traveled with the Club on its trips for the three succeeding seasons.

Gordon McCormick was in World War I as an officer of instruction in artillery, and during the closing weeks of the war was exposed to fire while serving as an aide to General Charles H. Martin. When WWI came in April of 1917, McCormick's senior year at Princeton Univeristy, McCormick attended Officers Training Camp, was commissioned a Captain, and thereafter served in France as Aide to a General who was commanding the 92nd Division. After the Armistice, McCormick moved to Paris, where he entered l'Ecole des Beaux Arts, and for several years studied architecture there, a subject in which he had been interested in college days. This interest also included the allied field of archeology, and in the summer of 1925, McCormick spent some three months in Sardis, where he worked with the Princeton Archeological Expedition, headed at that time by his earlier professor and friend, Dr Howard Crosby Butler.

On returning later to the States, McCormick formed a partnership with a small architectural firm in New York City, and practiced for several years. Thereafter he withdraw and returned to Chicago where, interrupted by frequent trips to Europe and to the Near East, he resided for the remainder of his life. His hobbies included the collecting of antiques and objects d'art. Called "Mr. X" by Robert Neal and Edgar Hellum, Gordon McCormick, financed the restoration of Polperro, part of the Pendarvis complex. McCormick was a life-long friend of Duncan Hines, who probably introduced him to Pendarvis. Hines may be best known for the cake mixes, baked goods, and bread products that bear his name, but most people forget that he was a real person and not just a fictitious figure invented for the brand. America's pioneer restaurant critic, Hines discovered his passion while working as a traveling salesman during the 1920s and 1930s -- a time when food standards were poorly enforced and safety was a constant concern. He traveled across America discovering restaurants and offering his recommendations to readers in his best-selling compilation Adventures in Good Eating (1935). The success of this work and of his subsequent publications led Hines to manufacture the extremely popular food products that we still enjoy today.