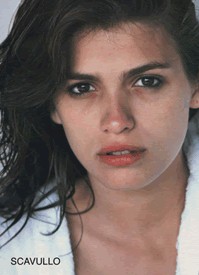 Gia Marie Carangi (January 29, 1960 – November 18, 1986) was an American fashion model during the late 1970s and early 1980s. Considered by some to be the first supermodel,[1][2] she was featured on the cover of fashion magazines, including multiple editions of Vogue and Cosmopolitan, and appeared in advertising campaigns for such fashion houses as Armani, Christian Dior, Versace, and Yves Saint Laurent.[3]

After Gia became addicted to drugs, her modeling career faltered, and in 1981 she dropped out of the fashion world. She then enrolled in a twenty-one-day detox program and started dating a college student called Rochelle (her real name was Elisa Golden), but her main girlfriend was makeup artist, Sandy Linter. Gia’s attempt to quit drugs was doomed when her good friend, fashion photographer Chris von Wangenheim, died in a car accident. Gia locked herself in a bathroom for hours, shooting heroin.

Afterward, Gia’s life entered a downward spiral of drugs and prostitution. She became infected with HIV and was among the first widely publicized cases of death from AIDS-RELATED complications.

Carangi is considered to be the first supermodel,[1][2] although that title has been applied to others, including Dorian Leigh,[31] Jean Shrimpton,[32] and Janice Dickinson.[33] Model Cindy Crawford, who rose to prominence the year Carangi died, was referred to as "Baby Gia" due to her resemblance to Carangi.[34] Crawford later recalled, "My agents took me to all the photographers who liked Gia: Albert Watson, Francesco Scavullo, Bill King. Everyone loved her look so much that they gladly saw me."[4] Additionally, Carangi, whose sexual orientation has been reported as both lesbian and bisexual, is considered a lesbian icon and is said to have "epitomized lesbian chic more than a decade before the term was coined."[2][5]

Carangi's life has been the subject of several works. A biography of Carangi by Stephen Fried titled Thing of Beauty—taken from the first line of John Keats' famous poem Endymion—was published in 1993. A documentary titled The Self-Destruction of Gia, released in 2003, showcased footage of Carangi, contemporary interviews with Carangi's family and former colleagues, including Sandy Linter, and footage of actress-screenwriter Zoë Tamerlis, herself a heroin addict, who had been commissioned to write a screenplay based upon Carangi's life at the time of her own death of drug-related causes in 1999.[35][36]

A biography of Carangi by Sacha Lanvin Baumann titled Born This Way: Friends, Colleagues, and Coworkers Recall Gia Carangi, the Supermodel Who Defined an Era was published in 2015.