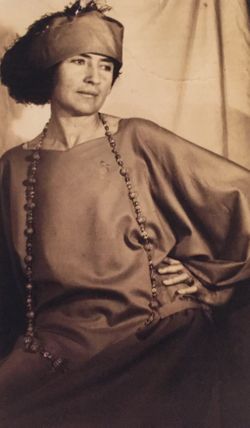 Boyle was born in San Francisco on January 26, 1878. She was the sixth child of John Boyle and Helen Milliken Clark. She met Japanese poet Takeshi Kanno (born 1877) at Joaquin Miller's summer home, The Hights.[2] They were married in Seattle, Washington, on May 22, 1907. They lived in a bungalow on the estate of Joaquin Miller, close to the poet's home.[3] In 1915 she sought divorce with the complaint of Kanno's extreme jealousy and refusal to provide, and the statement that she had "supported herself entirely by her own labor".[2] She attended Cogswell College, Lick School (California School of Mechanical Arts) and Mark Hopkins Institute of Art.[4] She studied under Douglas Tilden and Arthur Mathews. In New York after 1915, she lived with Eitaro Ishigaki (17 years her junior) until about 1928. Boyle and Ishigaki lived at 246 West 14th Street in New York; Kanno tracked down his wife and her lover, and reportedly lived not far from the couple's apartment on 14th Street. Boyle and Kanno reconciled in 1929, the same year that Ishigaki married Ayako Tanaka Ishigaki.

Margaret Sanger lived in the same apartment building with Ishigaki and Boyle from 1918 to 1921, and her sister, Ethel Byrne, occupied the unit above her. Boyle worked as art editor of the Birth Control Review for about three years. Ishigaki noted that Sanger was incredibly busy with her proselytizing tours across the country and establishing birth-control clinics and advocacy groups, including the American Birth Control League. He expressed great admiration for Sanger's conviction even in the face of incessant legal and sociopolitical adversities, and their apartment building became a retreat for Sanger to seek respite and friendship. Ishigaki facilitated the publication of Sanger's writings on birth control in the influential journal Kaizo in Japan, as well as her visit to Japan in 1922. It was also through Sanger's introduction that Ishigaki met the writer H.G. Wells and obtained the Japanese translation rights to Wells's Men Like Gods (1923) for publication in Kaizo.

Ishigaki also had unreserved praise for Agnes Smedley, another frequent guest at the Ishigaki-Boyle apartment-studio. Smedley, a journalist and writer, was deeply involved in international political movements of the time, including Indian nationalists' fight for independence, women's rights (she briefly worked for Sanger's Birth Control Review), and the Chinese communists' revolutionary activities in the 1930s. Ishigaki remembered Smedley as a genuine and passionate woman, a "true artist" and an articulate "genius" who was much more "mature" than he was despite their similar ages. During the early Cold War years, she was charged with having served as a spy for the Soviet Union, an accusation that author Ruth Price's research has shown to be true. In fact, Ishigaki and his wife, Ayako, faced multiple interrogations by the FBI in 1950 for their association with Smedley, and discovered that the Bureau had investigated their activities in the United States in the previous decades. That realization caused the Ishigakis tremendous distress, as they feared forced deportation. When Smedley died in the United Kingdom on May 8, 1950, and a memorial meeting was held for her at the Friends Meeting House on Stuyvesant Square on May 18, the Ishigakis chose not to attend out of fear of attracting the FBI's further scrutiny. The couple was heartbroken and cried a great deal, the Ishigakis recalled, when they imagined Smedley dying alone abroad. Years later, Ishigaki fondly remembered Smedley every time he saw morning glories, which used to adorn her home.

Art includes various works accessible to the public, including bronze bust of Joseph LeConte created during the year of his death in 1901. The plaster version is held in the University of California Archives. The finished bronze sculpture is located at UC Berkeley in the Earth Sciences & Map Library.