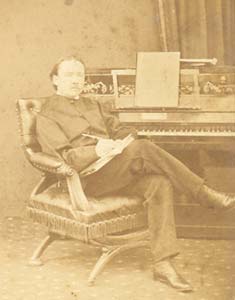 George Powell (February 10, 1842 - October 17, 1882) lived the life of a gentleman. He travelled widely through North Africa and Europe, especially Iceland. He was a great collector, and acquired pieces both at home and abroad. He also closely followed literary and musical trends and his interests led him to make several interesting connections, developing friendships with such famous figures as Algernon Charles Swinburne and H.W. Longfellow. Powell also published a variety of material during his lifetime, including three volumes of his own poetry, and a translation of Icelandic legends completed in conjunction with Eirikr Magnusson.

George Ernest John Powell was born in Cheltenham on February 10, 1842, the son of William Thomas Rowland Powell (1815–1878), a Welsh landowner and Conservative politician who served as Member of Parliament for Cardiganshire from 1859 until 1865, and Rosa Edwyna Cherry , daughter of William George Cherry of Buckland, Herefordshire. His only sister, Harriet (born 1844), died of tuberculosis aged 13. Born into a politically influential Cardiganshire family, he was brought up on the family estate of Nanteos, near Aberystwyth. He received his education at Eton, and at Brasenose College, Oxford, but left before graduating.

In 1868 Swinburne shared a cottage at Etretat, Normandy with his friend George Powell; above the entrance was the inscription "La Chaumière de Dolmancé" (Dolmancé's Cottage), named for the homosexual corrupter in Sade's La Philosophie dans le boudoir. Guy de Maupassant visited the place twice, and left accounts of a house of decadence staffed by fresh-laced lads, and full of weird knick-knacks like a parricide's flayed hand. There was a monkey on the loose, and hard liquor served at lunchtime, after which the two Englishmen pulled out gigantic folios of pornographic photographs, taken in Germany, all of male subjects. "I remember one of an English soldier masturbating on a pane of glass," recalled Maupassant, whose interests lay elsewhere.

His close friend Algernon Swinburne introduced Powell to the young artist Simeon Solomon. From his correspondence it is clear that Powell sometimes suggested ideas for compositions to Solomon. He purchased three watercolours by Solomon who was closely associated with the Pre-Raphaelite circle and later the Aesthetic Movement - Noon, A Roman Youth and Love Dreaming by the Sea; the latter two were both commissioned by Powell. A Roman Youth was painted when the artist was in Rome in 1869 where he wrote his prose poem A Vision of Love Revealed in Sleep, published in 1871. Solomon was also a friend of Swinburne and provided illustrations for his novel Lesbia Brandon (written c.1859-1868). In an undated letter from Solomon to Powell he consults his patron about the composition -‘would you like the ruined temple background to your "Love" or the sea + sky that we spoke of elsewhere - will you kindly let me have a line as it is being begun’. Solomon’s homosexuality earned him notoriety, an eighteen-month suspended sentence and eventual destitution. After Simeon’s arrest in 1873 Powell, unlike Swinburne, appears to have kept in contact with the Solomons. The Wounded Dove is the only work by Simeon’s sister Rebecca Solomon (1832-1886) who Powell's owned; her letters to Powell confirm that she was paid £15 in installments, the last of which was made in 1873. She trained under her brother Abraham and attended Spitalfields School of Design. The work she exhibited between 1850 and 1874 was favourably reviewed and reproduced in contemporary art magazines but after her brother’s arrest her promising career came to an abrupt end.

Powell also collected a number of works from the more well-known Pre-Raphaelites - two pencil drawings by Dante Gabriel Rossetti (1828-1882) of Clara Vaughan Morgan, 1874 and Ruth Herbert, 1858 and a watercolour of the head of a young woman by Sir Edward Poynter (1836-1919) who eventually became the President of the Royal Academy in 1896. Powell placed particular value on Ruth Herbert who was manageress of St James Theatre, London until 1867; quoted in the College Magazine 1882-83 he writes ‘Pictures of this noblest of artist-poets being of such extreme rarity and immense value, it has taken me five years of constant search to find this very interesting specimen’ suggesting that the work was not procured directly from the artist. Most of the paintings and drawings of female sitters in Powell’s collection are epicine, or ethereal. The watercolours of ‘scenes of Spanish life’ by P J Antoine are slightly more robust - his Woman with a Tambourine, The Drummer and The Fan are more in the Realist vein but very little is known about him except that he worked and exhibited in London.

Powell also bought paintings which were more of the academic or ‘old master’ variety, some of them genuine, some copies; these he may have purchased in sale rooms in London possibly through the agency of Mr Gullick from whom there is some correspondence. They include two early watercolours by J M W Turner (1775-1851) Folly Bridge, Oxford (c1794) and Westminster Bridge (c1796); two landscapes attributed to John Crome (1768-1821); two paintings attributed to John Constable (1776-1837), Branch Hill Pond, Hampstead Heath (probably by John Linnell) and A Country Road (possibly by F W Watts) and three large watercolours by Richard Westall (1765-1836): Satan Calling Forth His Legions (1792), A Nymph and two Satyrs [Elegia Quinta] and The Birth of Sin, all finished studies for engravings illustrating John Boydell’s edition of Milton’s Poetical Works (1792-94).

The paintings and objets d’art also reveal a decided interest in the male nude particularly in the collection of small bronzes. Some are Renaissance, some 18th or 19th-century copies of Renaissance originals and some are contemporary pieces made by well-known sculptors of the time such as On the sea shore (1877) (a black woman manacled in slavery) by John Bell (1812-1895), {italic:Pan] by Jean Baptiste Clésinger (1814-1883) and Bacchus by Victoriano Codina-Länglin (1844-1911). The overall theme of the bronzes is the male nude in classical guise, subject matter which is echoed in some of Zwecker’s watercolours, particularly the overtly phallic Boy on a Dragonfly, Ajax by Etienne Garnier and Love Dreaming by the Sea by Simeon Solomon. Homoeroticism is undeniably one of the prime organising principles of Powell’s collection of fine and decorative art.

Powell was a fanatical devotee of Wagner and attended the first performance of the Ring cycle. A list, preserved by Powell, of those attending Bayreuth in August 1876 describes Powell as ‘Gelehrter’ - a learned gentleman or man of letters. By his own account he also had dinner with the ‘Great Master’ and his wife Cosima in September 1876. The relic of this experience was a dried flower from the gardens at Bayreuth (long since lost). He amassed a number of musical manuscripts and autographs including Ode upon the New Year (1693) by Dr John Blow (1649-1708), and Orazio Benecoli’s Dixit Dominus (1668). In 1862 he purchased from the sale of the library of the Society for British Musicians an autographed manuscript of Mendelssohn’s concert overture Meerestille und glückliche farht (Calm sea and prosperous voyage) 1832. Unfortunately the score is no longer considered to an authentic working document by the composer. The artist Wilhelm Kümpel, a mutual friend of Powell and Zwecker was commissioned to produce crayon portraits of Powell’s musical and literary heroes among them Henry Wadsworth Longfellow, Robert Schumann and Richard Wagner.

Powell's travels, along with his poor relationship with his father, W.T.R. Powell, meant that he remained largely absent from Nanteos whilst a young man. On his father's death in 1878, he inherited Nanteos, and returned home. In 1880, he was appointed High Sheriff of Cardigan, and the following year, on the 10th of May, he married Dinah T. Harries, of Goodwick, Pembrokeshire. After only a year of marriage, on the 17th of October 1882, he died childless, and is buried in the churchyard at Llanbadarn Fawr, near Aberystwyth. He was succeeded by his father's cousin, William Beauclerk Powell.