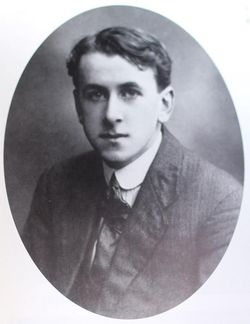 Lieutenant Geoffrey Robert Youngman Thurlow (March 5, 1895 - April 23, 1917) was an officer of the Sherwood Foresters (Notts and Derby Regiment), 'C' Coy. 13th Bn. attd. 10th Bn. Edward Brittain became close friends with fellow officer Geoffrey Thurlow, a sensitive scholar who wanted to become a priest, had returned to the front despite being badly shell-shocked. Geoffrey was killed in action in 1917.

Geoffrey Thurlow, the youngest child of elderly parents, was born on 5th March 1895 at Eversley, Buckhurst Hill, Essex, to Robert Youngman Thurlow and Clara Thurlow. He was educated at Chigwell School where he became Head of School in his final year. His school reported that "he was a boy of the highest sense of duty and remarkable singleness of purpose, and for these qualities, as well as for his tact and his charm of manner, he stands out prominently from among the many excellent Heads of School we have known."

Thurlow won a place at University College, but on the outbreak of the First World War he left Oxford University and obtained a commission with the 10th Sherwood Foresters. During training he became friends with Edward Brittain. Alan Bishop has suggested in his book, Letters From a Lost Generation (1998) that "their relationship may have gone beyond the bounds of chaste friendship". Second Lieutentant Thurlow arrived on the Western Front in June 1915. He suffered from shellshock after experiencing heavy bombardment at Ypres in February 1915 and was sent back to England.

While at hospital at Fishmongers' Hall he was visited by Vera Brittain, the sister of his best friend, Edward Brittain. Vera wrote on 11th October 1915: "I liked Thurlow so much. Whatever Edward's failings, I must say he has an admirable faculty for choosing his friends well... But seeing Thurlow for a short time made me feel rather sad, for the nicer such people as he are, the more they serve to emphasize in some indirect way, the fact of your immense superiority over the very best of them!"

On the night of 22nd December 1915 Roland Leighton was ordered to repair the barbed wire in front of his trenches. It was a moonlit night with the Germans only a hundred yards away and Leighton was shot by a sniper. His last words were: "They got me in the stomach, and it's bad." He died of his wounds at the military hospital at Louvencourt on 23rd December 1915. After the death of Leighton, his girlfriend, Vera Brittain, began visiting Geoffrey on a regular basis.

Thurlow returned to the Western Front early in 1916. Soon after arriving at Ypres he was wounded by a shell exploding in the trenches. Vera wrote to Edward Brittain on 23rd February: "I saw that Thurlow had been wounded - I suppose in the recent fighting at Ypres. I have almost loved him since his little letter to me after Roland died, and I can't tell you how anxiously I hope that he is not badly hurt." Thurlow had been shot in the face and he returned to England.

Vera Brittain went to visit him on 27th February. Later that day she wrote to her brother about his condition: "I have just been to see Thurlow at Fishmongers' Hall Hospital, London Bridge. He is only very slightly wounded on the left side of his face; fortunately his eyes, nose and mouth are quite untouched. In fact he says he won't even have a scar left, and the wound is healing with a depressing rapidity.... He was apparently wounded in the bombardment, before all the trench fighting began. He thinks hardly any of his battalion are left now."

Vera told Edward Brittain that Thurlow was suffering from the consequences of serving on the front-line: "Thurlow was... sitting before a gas stove, with a green dressing gown on and a brown blanket over his knees. He seems to feel the cold a great deal, which must be owing to the shock, and also for the same reason his nerves are very bad, so he has been given two months sick leave."

Thurlow told Vera that he was keen to return to France. "Of course he doesn't want to go back a bit, but since he has to go, he's got the same feeling as he had before, that he wants to go out quickly and get it over. He says he finds the anticipation so much worse than the things themselves, whatever they are. He says he is not a bit of a success out there because he is so afraid of being afraid, and he hates the way all his men's eyes are fixed on him when anything big is on, partly to see how he will take it, partly because they are afraid of anything happening to him. He says he objects to war on principle, and is a non-militarist very strongly at heart. I think it was very brave of him to join almost at once as he did... It is easy to see he is suffering from shock; he looks rather a ghost now he is sitting up, talks even more jerkily than before, and works his fingers about nervously while he is talking."

Thurlow returned to the Western Front. On 18th November 1916, he wrote to Vera Brittain: "Since my last letter much has happened - we have been to the war again and the weather treated us abominably: however our battalion did well taking an important Hun trench - we didn't go over the top but had to clean up and hang on to the trench. Luckily we had no officer casualties though there were many among the men. But as our number of officers is at present the irreducible minimum perhaps this accounts for it."

On 27th January 1917 Thurlow wrote to Edward Brittain: "At present we are sitting in a dugout. Brilliant frosty morning: much aerial activity: one Boshe brought down quite near here. A bit of a strafe on during the night and we were so pricelessly warm here that I was positive we should have to stand to or something equally beastly. However we didn't have to so slumbered fitfully on."

Thurlow's mother became very ill in March, 1917, but he was refused leave to see her. He asked Vera: "Don't you often speculate on what lies beyond the gate of death? The after life must be particularly interesting. No chance of getting leave... it is rotten being away from home when anyone isn't well."

On 20th April, 1917, Geoffrey wrote to Vera Brittain that he had heard that Victor Richardson had been badly wounded while fighting at Arras. He knew that he was about to take part in a major offensive himself: "After tea tonight wanting to be alone.... I walked out along a high embankment and everything was fresh and cool quite in contrast to the heated atmosphere of our dugout. As I looked westward I saw just below me in front of the embankment the battered outline of Hun trenches with two long straggling communication trenches winding away into some shell torn trees: the setting sun reflected in the water at the bottom of many crump holes making them look masses of gold... I only hope I don't fail at the critical moment as truly I am a horrible coward: wish I could do well especially for the School's sake."

Geoffrey Thurlow was killed in action at Monchy-le-Preux on 23rd April 1917. Three days later, Captain J. W. Daniel, wrote to Edward Brittain, about Thurlow's death: "The hun had got us held up and the leading battalions of the Brigade had failed to get their objective. The battalion came up in close support through a very heavy barrage, but managed to get into the trench - of which the Boshe still held a part... I sent a message to Geoffrey to push along the trench and find out if possible what was happening on the right. the trench was in a bad condition and rather congested, so he got out on the top. Unfortunately the Boche snipers were very active and he was soon hit through the lungs. Everything was done to make him as comfortable as possible, but he died lying on a stretcher about fifteen minutes later."

Edward wrote to Vera Brittain about Thurlow: "Always a splendid friend with a splendid heart and a man who won't be forgotten by you or me however long or short a time we may live. Dear child, there is no more to say; we have lost almost all there was to lose and what have we gained? Truly as you say has patriotism worn very very threadbare."

Vera replied: "I can't tell you how I shall miss Geoffrey - I think he meant more to me that anyone after Roland and you. as for you I dare not think how lonely you must feel with him dead and Victor perhaps worse, for it makes me too impatient of the time that must elapse before I can see you - I may not even be able to start for two or three weeks. Geoffrey and I had become very friendly indeed in letters of late, and used to write at least once a week... After Roland he was the straightest, soundest, most upright and idealistic person I have ever known."