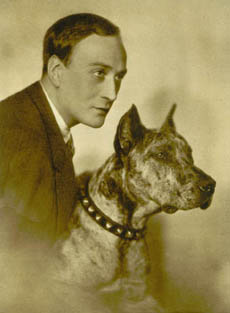 Frans Gösta Viktor Ekman (28 December 1890 – 12 January 1938) was a Swedish actor. The theater in Stockholm held a historian of outstanding quality in Anders De Wahl. A true diva who never could stand an equal, he was known to favor military men. And there was only one actor to equal him, Gosta Ekman, a bisexual dandy who set the standard for how young men should behave in the Roaring Twenties. During the 1920s, Karl Gerhard, a close friend of Ekman's, performed a number of popular revue shows on the Stockholm stage, making fun of current events and well-known personalities in satirical songs and allusions. These allusions often stole the show by creating reversed-gender roles with very risque texts, implying that certain feminine young men, the so-called jazz boys (and others from Stockholm's circle of celebrities) had an inclination for their own sex. Karl Gerhard, himself a homosexual, thought, among other things, that Ekman was much too effeminate, calling him "the blond male diva of the group."

Generally spoken of as Swedish theatre's most legendary stage actor, Gösta Ekman enjoyed a prolific stage career during his short life, becoming the first real star of Swedish theatre. His boyish good looks attracted both sexes, helping to create a massive cult following and elevating him to the status of a living legend. Combined with a beautiful voice and a powerful stage presence, Ekman was able to captivate his audiences.

He was known as a self-taught master of disguise with theatre make-up and costumes, Gösta Ekman was equally convincing as a farmer's son, an 18th-century middle-aged aristocrat, or an 80-year-old lunatic. Furthermore, he played in comedies, tragedies, dramas, and operettas. As a result, it was believed that he was capable of being convincing in all genres and as all types of characters. At different times, he also ran and supervised several private theatres in Stockholm, including the Oscarsteatern, the Vasateatern, and the Konserthusteatern. He was also head of the Gothenburg City Theatre in the 1930s. At the Vasateatern, which he ran from 1931 to 1935, he both directed and played the lead in several plays, while also producing a large number of productions. As a result, his time at the Vasateatern is considered to be the peak of his stage career. He first entered the stage as an extra in an operetta in 1907, but made his professional stage debut in the renowned Selander Company in 1911. The ghost of Gösta Ekman is still said to haunt his former dressing room at the theatre.

Ekman started in films at the dawn of the Swedish film industry and played an important role in its development. One of his first film roles was in Victor Sjöström's experimental film Trädgårdsmästaren (1912). Later, he played the lead in the first Swedish talkie, For Her Sake (1930). Ekman also acted in two films that would gain international recognition: F. W. Murnau's silent film classic Faust, where he played the title character, and in the original 1936 version of Intermezzo, where he played a world-famous violinist opposite Ingrid Bergman in her breakout role. But they had in fact already acted opposite each other in the Swedish 1935 movie Swedenhielms where they share a couple of wonderful scenes alone together as their characters have a heart-to-heart conversation on life and love; among the most memorable moments in the film.

His best on-screen credit is often said to be his King Charles XV/Leonard Pettersson in film comedy Kungen kommer (1936), where Ekman masterfully plays a double-role in the film; first the king and then also the king's lookalike; an actor who is hired by members of the Royal Court to impersonate His Majesty at a private party. Naturally the real king later arrives at the party causing a number of confusions and comic mix-ups.

Ekman also made a number of successful song recordings from his revue numbers, including songs "En herre i frack" (1935) – perhaps his most popular recording – and "Kvinnor och champagne" (Women and Champagne) in 1929.

Early on, Gösta Ekman was labeled as a workaholic, sacrificing himself for his art and for his love of the theatre. Later, as his fame increased, his workload also increased. During the day, he would rehearse and direct plays. In the evening, he played leading roles in stage plays. Later at night, he would film. This busy schedule left him with relatively little free time. Furthermore, the free time he did have was spent carrying out his duties as the administrative director of the theatres he ran.

In 1926, while filming Faust in Berlin, he was introduced to cocaine by two Scandinavians, who told him that cocaine would help him cope with his work schedule better. Sadly, this began a long-term drug addiction for the actor that slowly deteriorated his health and eventually caused his death 12 years later at the age of 47.

In 1914, Gösta Ekman married Greta Sundström. Later, Greta gave birth to Hasse Ekman, who came to be one of Sweden's most successful film directors in the 1940s and 1950s. Gösta Ekman's grandson, Gösta Ekman Jr., also became well-known through his career as an actor and was considered to be one of Sweden's very finest actors. One of Hasse Ekman's movies, Kungliga patrasket from 1945 about a famous acting family, was partly based on his own upbringing in an acting family.