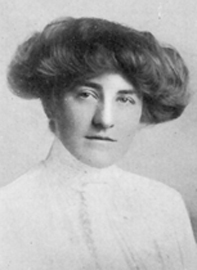 Frances Simpson Stevens (1894 – July 18, 1976) was an American painter, who is best remembered as one of the few Americans to directly participate in the Futurist Movement.[1] Stevens was also one of the artists who exhibited at the landmark show Armory Show in New York City. The show included her oil painting Roof tops of Madrid ($200).[2]

Stevens was born and grew up in Chicago, Illinois.[3][4] Her mother, Ellen Welles Stevens,[5] could trace their ancestry back to 12th century England and passed down a lifetime "fascination with lineage."[6] She was a descendant of Thomas Welles, the first Governor of the Colony of Connecticut.[7]

She graduated from Dana Hall School in Wellesley, Massachusetts, and moved to New York City.[6] In 1912 she attended a summer painting class taught by Robert Henri in Spain. It was there that she painted The roof tops of Madrid, the painting that she would exhibit a year later in the Armory Show.[8]

Following the closing of the show, at the urging of Mabel Dodge, Stevens moved to Florence where she rented a studio from 1913 to 1914 with Mina Loy,[9] who had asked Dodge to find her a boarder. Stevens and Loy became fixtures in the local art scene and it was there that they became acquainted with Marinetti and the Futurists.[10] Stevens was the only American to exhibit at the 1914 Esposizione Libera Futurista Internazionale,[11] where she showed eight works.

Stevens was active in World War I.[12] After leaving Europe she returned to New York where she published a series of cartoons in Rogue magazine. She also exhibited in New York, receiving a positive review in the New York Times.[13]

Stevens explicitly identified her work as futurist. In an article for The Popular Science Monthly.

Very little of Stevens' art has survived. One work that has is Dynamic Velocity of Interborough Rapid Transit Power Station at the Philadelphia Museum of Art.[15][16]

On April 19, 1919, Frances was married Prince Dimitry Golitzine (1882–1928), who was then the attache to the Russian ambassador. The wedding was widely reported and American Art News identified him as a son of the last Prime Minister of Russia, Prince Nikolai Dmitriyevich Golitsyn.[19] They had reportedly met at a dinner, when the Prince was attached to the Russian Embassy in Washington.[20] They were married in a registrar's office.[20] Frances was latterly styled Princess Dimitry Golitzine. After honeymooning in California, the couple departed for Vladivostok, where the Prince had a naval command, travelling by way of Japan.[19] Frances was his second wife; his first wife was killed in 1918 in Russia, during the aftermath of the Russian Revolution.[21]

After her 1919 marriage, Stevens and her husband lived in Siberia for two years during the Russian Civil War. They were in Omsk while the Kolchak government was in power there, and later escaped from Vladivostok to Japan on the Russian warship Oriole, whose men were loyal to the Kerensky government. The couple returned to America, arriving in Boston on August 14, 1920, on the British steamship Persian Prince, via China.[17]

Stevens apparently continued her artistic activities for at least some time after her return to New York.[18]

Luckily, her mother had inherited a considerable amount of money from her late husband’s estate and had kept Frances’ artwork. In 1923, Frances exhibited her artwork but a reviewer found it “too difficult to form an opinion.” This was her last public show. In 1925 Frances regrouped, became an equestrian with a stable of 22 horses, and planned to take camera portraits of horses at the Bournemouth Race Track on the English Channel. She seems to have disappeared from public life until 1961 when she was admitted to Mendocino State Hospital in California. She became a ward of the state of California and lived in various residential care homes. She died on July 18, 1976, at the age of 82. The records listed no next of kin nor were any traces of her estate found. She was working on a memoir before she died but unfortunately it disappeared.