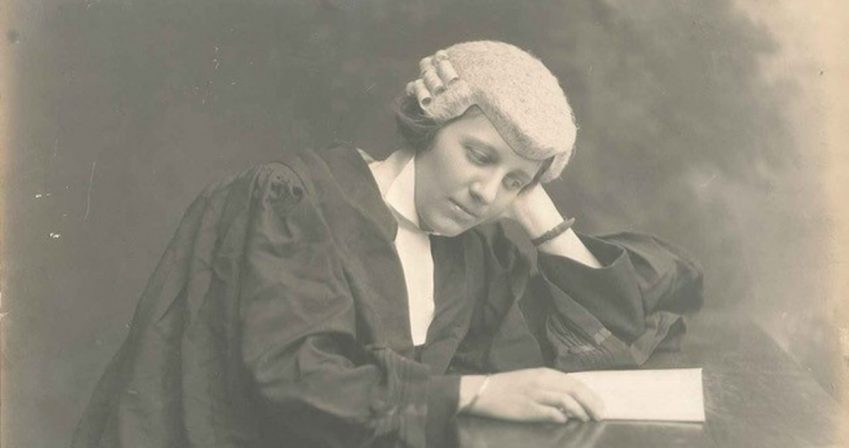 She was an Irish barrister and the first woman, together with Averil Deverell, to be admitted to the bar in Ireland[1][2] on 1 November 1921.[3][4] It not only made headlines in Dublin but also in New York, London, and India. It was almost a year before any woman was called to the English bar (Ivy Williams, 10 May 1922).[5]

Kyle was born on 30 October 1893 to parents, Kathleen Frances Bates and Robert Alexander Kyle, owner of a high class outfitter/ drapers. Initially educated at home by a French-born governess, she and sister Kathleen (1890-1965) went to a Belfast ‘Dame School’, followed in 1905 by boarding school in Poitiers, France. In 1906 the sisters were separated – Kathleen to board at Wycombe Abbey, and Fay to a finishing school in Switzerland. She received her BA in French, in 1914,[3] and her LLB, in 1916, at Trinity College, Dublin[4] where she became the first woman to win the John Brooke Scholarship.[5] At the time, The Irish Times described her being awarded the Scholarship as representing "a women’s invasion of the law."[4] In January 1920, Frances and Averil were admitted as the first female students of law at King's Inns, Dublin. Frances came first in the Bar Entrance Examinations. In 1922, Frances was elected a member of the circuit of Northern Ireland at a meeting in Belfast, becoming the first female member of a circuit. Frances is reported in the Dublin Evening Telegraph in 1922 as having received eight briefs.[3] Frances struggled to find work as her last listing in Thoms Law Directory is in 1931. In 1937, she appeared in court to defend herself on a parking summons.[3]

She chose a life of culture and travel, documenting her regular journeys to France and Italy with family, and friends such as the Shackleton Heald sisters, in entertaining correspondence. Her aunt Georgina Moutray Kyle (1865-1950), was a well known artist, with 1920s and 1930s exhibitions in Paris and Ireland. Channelling her intellectual brilliance into conversation, letters, music and languages, Fay held a small salon in her Belfast home. A skilled violinist and linguist, she was fluent in French and able to read philosophy and literature in several European languages. During World War II she provided hospitality and support for servicemen, setting up language classes for the Ulster Troops Library Scheme while herself learning Czech. For many years at the Belfast family home with her sister and family, and their widowed father, in 1944 she followed the recently widowed Kathleen to London, living with her in Hampstead. In 1930, Kathleen was described by the Belfast Newsletter as "very well known in Belfast" and "a delightful speaker". Kathleen, who was involved in suffrage, graduated LLB in 1914, but married a medical inspector, Dr. John McCloy, in 1918 and pursued her literary connections. In increasing ill health, Frances died of cancer at the London Clinic on 12 February 1958, aged 64.