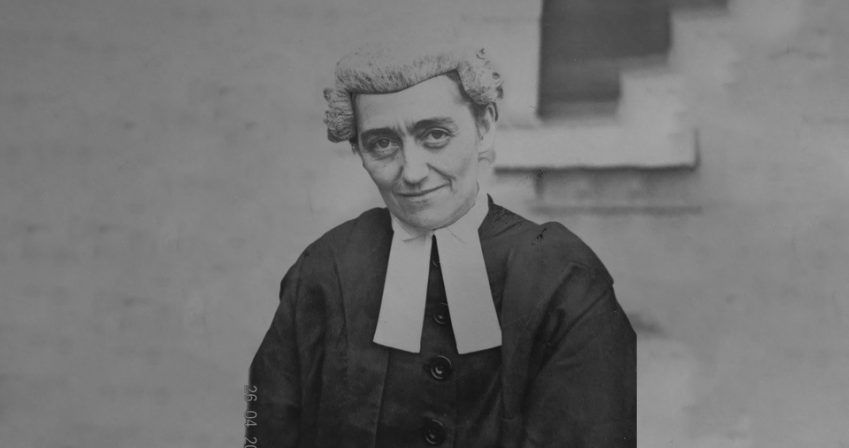 Averil Katherine Statter Deverell (2 January 1893 – 11 February 1979) was one of the first two women barristers in the UK and Ireland.

Deverell was born on 2 January 1893 in Dublin. Her father, William Deverell (1862-1934), a brewer’s son of Anglo-Irish, Protestant Unionist stock, was a solicitor who would become Clerk of the Crown and Peace for County Wicklow, and her mother was Ada Kate Statter Carr (1864-1952), the daughter of a wealthy London solicitor from a British mercantile family in St Petersburg. Growing up in Greystones, she was taught by her governess until she attended the French School, Bray, while socialising with Irish aristocracy at home.[1] Deverell attended Trinity College, Dublin in 1911, a few years after it opened its doors to women in 1904 and was awarded a law degree from in 1915.[2] In 1912 she joined Trinity’s St John Ambulance VAD unit and completed over 3,000 hours war service. Taught to drive by her father, she was finally accepted as an ambulance driver, serving in France from July to December 1918.[3] When she and her friend Frances Kyle were called to the bar on 1 November 1921, the admission of two women made international headlines.[1][4] Deverell was the first woman to appear in the Supreme Court of Ireland and the Court of Criminal Appeal in Ireland, and in 1928 she became the first Irish woman barrister to appear before the Privy Council in London.[5] In addition, as she was called in November 1921, which pre-dated the Anglo-Irish treaty, and her first case being in January 1922 before the treaty was implemented, she was officially the first woman to act as a barrister in the United Kingdom.[1]

As a financial supplement to her work, she bought a cairn terrier with her first fee, and went on to set up a kennels, becoming a breeder of the dogs.[1] Living in the family home, Ellesmere, in Greystones, Co. Wicklow from 1910 to 1975, (her Brigadier brother died there in 1966), she died in a modern bungalow on 11 February 1979. (The year her friend Mella was elected first woman Chair of Bar Council). Averil’s bequest to Trinity Law School funded the post of Averil Deverell Lecturer in Law (first holder Fidelma Macken, first woman judge European Court of Justice). The portrait she donated hangs in the Law Library, a barristers’ room is named after her.