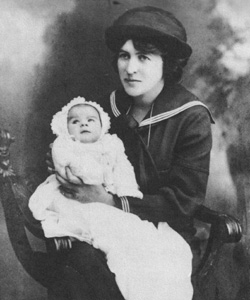 Frances Josepha Gregg (1885 – April 21, 1941) was an American poet and prose writer who lived in interesting times, and knew very interesting people. To quote the blurb on her published memoir, The Mystic Leeway (1995), "Within literary history, particularly the history of Modernism, she has been a mysterious presence."

She was born in 1885 and her childhood was spent in the towns and outposts of the Middle West. Her grandmother was a lecturer on 'Woman's rights' and 'Temperance'. Before she was six, she marched in a parade with banners inscribed with 'Votes for Women'. She signed the pledge when she was eight; and trailed up the sawdusty steps of a Camp Meeting platform to avow herself 'a child of God' in skirts too short and wisps of hair flicking against her burning cheeks, when she was ten. Growing up in Christ: family life and family religion by Frances Gregg has been published postmously in the 1960s.

She was an art student at the Pennsylvania Academy of Fine Arts. She was said to be strikingly beautiful; in a novel, H.D. describes her eyes as "the blue eyes, it is said one sees in heaven."

Around 1908, Gregg met American poets H.D. and Ezra Pound, and began an affair with both of them.[11] As Gregg wrote in her journal at the time, she and H.D. were "Two girls in love with each other and each in love with the same man." After spending part of 1910 living in Greenwich Village, she sailed to Europe with Gregg and Gregg's mother on July 23, 1911, in The Floride. In London, Pound introduced Gregg to London literary society, including May Sinclair. In Europe, H.D. began a more serious career as a writer. Her relationship with Gregg cooled, and she met a writing enthusiast named Brigit Patmore with whom she became involved in an affair. Gregg returned to the United States in October 1911.

She became the most important person in John Cowper Powys' life, his feminine counterpart, the alter ego he had sought but could not marry. Powys met her in Philadelphia in 1912, was madly in love with her but being already married, he arranged for her marrying his close friend, writer Louis Umfraville Wilkinson (1888-1966). After the marriage she went by Josepha Frances Wilkinson and moved back to England. They had two children but divorced a few years after their marriage. Gregg was also courted by Aleister Crowley, to whom she was introduced by her husband friend, novelist and journalist Frank Harris (1855-1931). Gregg was unnerved by Crowley, and did not reciprocate the interest.

Gregg remained in England, living in the early 1920s in Suffolk where she contracted breast cancer but eventually recovered. In the late 20's she lived in in London, where she worked as a journalist and wrote stories for the News Chronicle. In the 1930s she was in Norfolk, the Chiltern Hills to Sussex, High Wycombe. By 1939 she lived in St. Columb in Cornwall, where she worked at an A.S. Neill-type school and looked after young evacuees. By 1941 she was the manager of the Navy, Army and Air Force Institute at the Citadel in Plymouth. During the evening of the 21st April she had made sure all the staff were safe 'whilst the centre of Devonport was destroyed' and had at some point begun to wash dishes then locked her manuscripts into the safe. She had decided to return to her home at 16 Tamar Terrace, Devonport, to be with her mother and daughter and would not listen to staff who tried to dissuade her.

Gregg, her mother, Julia Vanness Gregg, and her daughter met their death at Tamar Terrace, on Monday night, 21 April 1941, during the air-raid. She was buried in a communal grave at Estover, Plymouth, under her married name, Josepha Frances Wilkinson.

Before her death in the 1941 bombing of Plymouth, Hilda's Book, a small handbound book of poetry written by Ezra Pound for H.D., had been given to Frances. It was discovered in the rubble of her burnt-out house. Frank Wintle made the film Hilda's Book during the 1980s for the now defunct Television South West.

After Gregg's death, her son Oliver Marlow Wilkinson (born 1915) rescued her autobiographical writings, along with letters from Pound, Powys, and H.D., from the Citadel, and used them to compile her memoir, The Mystic Leeway.