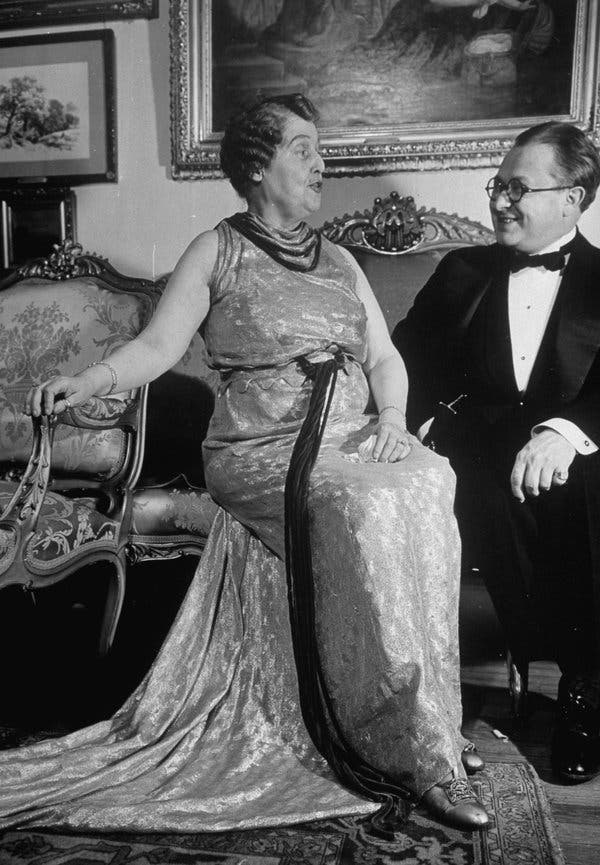 Florence Foster Jenkins (born Narcissa Florence Foster; July 19, 1868 – November 26, 1944) was an American socialite and amateur soprano who was known and mocked for her flamboyant performance costumes and notably poor singing ability. The historian Stephen Pile ranked her "the world's worst opera singer ... No one, before or since, has succeeded in liberating themselves quite so completely from the shackles of musical notation."[1]

Despite (or perhaps because of) her technical incompetence, she became a prominent musical cult figure in New York City during the 1920s, 1930s, and 1940s. Cole Porter, Gian Carlo Menotti, Lily Pons, Sir Thomas Beecham, and other celebrities were fans.[2][3] Enrico Caruso is said to have "regarded her with affection and respect".[4] The poet William Meredith wrote that what Jenkins provided "... was never exactly an aesthetic experience, or only to the degree that an early Christian among the lions provided aesthetic experience; it was chiefly immolatory, and Madame Jenkins was always eaten, in the end."[5]

Foster said her lifelong passion for public performance began when she was seven years old.[12] A talented pianist, she performed at society functions as "Little Miss Foster",[5] and gave a recital at the White House during the administration of President Rutherford B. Hayes.[12] After graduating from high school, she wanted to study music in Europe, but after her father refused she eloped with Frank Thornton Jenkins (1852–1917) to Philadelphia, where they married in 1885.[10] The following year, after learning that she had contracted syphilis from Frank, she ended their relationship and reportedly never spoke of him again. Years later, Florence asserted that a divorce decree had been granted on March 24, 1902, although no documentation of this has been found.[13] She retained the Jenkins surname for the remainder of her life.

After an arm injury ended her aspirations as a pianist, Jenkins gave piano lessons in Philadelphia to support herself; but around 1900 she moved with her mother to New York City.[12] In 1909, she met British Shakespearean actor St. Clair Bayfield, and they began a vaguely defined cohabitation relationship that continued the rest of her life.[14] Upon her father's death later that year,[10] Jenkins became the beneficiary of a sizable trust, and resolved to resume her musical career as a singer, with Bayfield as her manager.[15] She began taking voice lessons and immersed herself in wealthy New York City society, joining dozens of social clubs. As the "chairman of music" for many of these organizations, she began producing lavish tableaux vivants—popular diversions in upper-crust social circles of that era.[5] In each of these productions, Jenkins would invariably cast herself as the main character in the final tableau, wearing an elaborate costume of her own design.[12] In a widely republished photograph, Jenkins poses in a costume, complete with angelic wings, from her tableau inspired by Howard Chandler Christy's painting Stephen Foster and the Angel of Inspiration.[16]

Jenkins began giving private vocal recitals in 1912, when she was in her early forties.[15] In 1917, she became founder and "President Soprano Hostess" of her own social organization, the Verdi Club,[6][17] dedicated to "fostering a love and patronage of Grand Opera in English". Its membership quickly swelled to over 400; honorary members included Enrico Caruso.[5] When Jenkins's mother died in 1930, additional financial resources became available for the expansion and promotion of her singing career.[18]

According to published reviews and other contemporary accounts, Jenkins's acknowledged proficiency at the piano did not translate well to her singing. She is described as having great difficulty with such basic vocal skills as pitch, rhythm, and sustaining notes and phrases.[19] In recordings, her accompanist Cosmé McMoon can be heard making adjustments to compensate for her constant tempo variations and rhythmic mistakes,[20] but there was little he could do to conceal her inaccurate intonation. She was consistently flat, sometimes considerably so. Her diction was similarly substandard, particularly with foreign-language lyrics. The difficult operatic solos that she chose to perform—all well beyond her technical ability and vocal range—served only to emphasize these deficiencies.[19] "There's no way to even pedagogically discuss it," said vocal instructor Bill Schuman. "It's amazing that she's even attempting to sing that music."[21] The opera impresario Ira Siff, who dubbed her "the anti-Callas", said, "Jenkins was exquisitely bad, so bad that it added up to quite a good evening of theater ... She would stray from the original music, and do insightful and instinctual things with her voice, but in a terribly distorted way. There was no end to the horribleness ... They say Cole Porter had to bang his cane into his foot in order not to laugh out loud when she sang. She was that bad."[14] Nevertheless, Porter rarely missed a recital.[22]

The question of whether "Lady Florence"—as she liked to be called, and often signed her autographs[14]—was in on the joke, or honestly believed she had vocal talent, remains a matter of debate. On the one hand, she compared herself favorably to the renowned sopranos Frieda Hempel and Luisa Tetrazzini, and seemed oblivious to the abundant audience laughter during her performances.[23] Her loyal friends endeavored to disguise the laughter with cheers and applause; and they often described her technique to curious inquirers in "intentionally ambiguous" terms—for example, "her singing at its finest suggests the untrammeled swoop of some great bird".[24] Favorable articles and bland reviews, published in specialty music publications such as The Musical Courier, were most likely written by her friends, or herself.[12] "I would say that she maybe didn't know [how badly she sang]," said mezzo-soprano Marilyn Horne. "We can't hear ourselves as others hear us." Nerve damage due to syphilis and its treatment may have physically compromised her hearing as well.[21]

On the other hand, Jenkins refused to open her performances to the general public, and was clearly aware of her detractors. "People may say I can't sing," she once remarked to a friend, "but no one can ever say I didn't sing."[5] She dismissed her original accompanist, Edwin McArthur, after catching him giving her audience "a knowing smile" during a performance.[25] She went to great lengths to control access to her rare recitals, which took place at her apartment, in small clubs, and once each October in the Grand Ballroom of the Ritz-Carlton Hotel. Attendance, by personal invitation only, was restricted to her loyal clubwomen and a select few others. Jenkins handled distribution of the coveted tickets herself, carefully excluding strangers, particularly music critics.[12] "There's no way she could not have known," said Schuman. "No one is that unaware ... she loved the audience reaction and she loved singing. But she knew."[21]

Despite her careful efforts to insulate her singing from public exposure, a preponderance of contemporaneous opinion favored the view that Jenkins's self-delusion was genuine. "At that time Frank Sinatra had started to sing, and the teenagers used to faint during his notes and scream," McMoon told an interviewer. "So she thought she was producing the same kind of an effect."[21] "Florence didn't think she was pulling anyone's leg," said opera historian Albert Innaurato. "She was compos mentis, not a lunatic. She was a very proper, complex individual."[14]

Her recitals featured arias from the standard operatic repertoire by Mozart, Verdi, and Johann Strauss; lieder by Brahms; Valverde's Spanish waltz "Clavelitos" ("Little Carnations"); and songs composed by herself and McMoon.[5] As in her tableaux, she complemented her performances with elaborate costumes of her own design, often involving wings, tinsel, and flowers. She would perform "Clavelitos" dressed as Carmen, complete with castanets and a wicker basket of flowers, clicking the castanets and tossing the flowers one by one. When she ran out of flowers, she flung the basket too—and then the castanets. Her fans, aware that "Clavelitos" was her favorite song, would usually demand an encore, prompting her to send McMoon into the audience to retrieve flowers, basket, and castanets so that she could sing the number again.[15]

Once, when a taxi in which she was riding collided with another car, Jenkins let out a high-pitched scream. Upon arriving home, she went immediately to her piano and confirmed (at least to herself) that the note she had screamed was the fabled "F above high C"—a pitch she had never before been able to reach. Overjoyed, she refused to press charges against either involved party, and even sent the taxi driver a box of expensive cigars.[26][14] McMoon said neither he "nor anyone else" ever heard her actually sing a high F, however.[22]

At the age of 76, Jenkins finally yielded to public demand and booked Carnegie Hall for a general-admission performance on October 25, 1944.[19] Tickets for the event sold out weeks in advance; the demand was such that an estimated 2,000 people were turned away at the door.[22] Numerous celebrities attended, including Porter, Marge Champion, Gian Carlo Menotti, Kitty Carlisle and Lily Pons with her husband, Andre Kostelanetz, who composed a song for the recital. McMoon later recalled an "especially noteworthy" moment: "[When she sang] 'If my silhouette does not convince you yet/My figure surely will' [from Adele's aria in Die Fledermaus], she put her hands righteously to her hips and went into a circular dance that was the most ludicrous thing I have ever seen. And created a pandemonium in the place. One famous actress had to be carried out of her box because she became so hysterical."[23]

Since ticket distribution was out of Jenkins's control for the first time, mockers, scoffers, and critics could no longer be kept at bay. The following morning's newspapers were filled with scathing, sarcastic reviews that devastated Jenkins, according to Bayfield.[12] "[Mrs. Jenkins] has a great voice," wrote the New York Sun critic. "In fact, she can sing everything except notes ... Much of her singing was hopelessly lacking in a semblance of pitch, but the further a note was from its proper elevation the more the audience laughed and applauded." The New York Post was even less charitable: "Lady Florence ... indulged last night in one of the weirdest mass jokes New York has ever seen."[23]

Five days after the concert, Jenkins suffered a heart attack while shopping at G. Schirmer's music store, and died a month later on November 26, 1944, at her Manhattan residence, the Hotel Seymour.[10][17] She was buried next to her father in the Foster mausoleum, Hollenback Cemetery, Wilkes-Barre, Pennsylvania.[23]