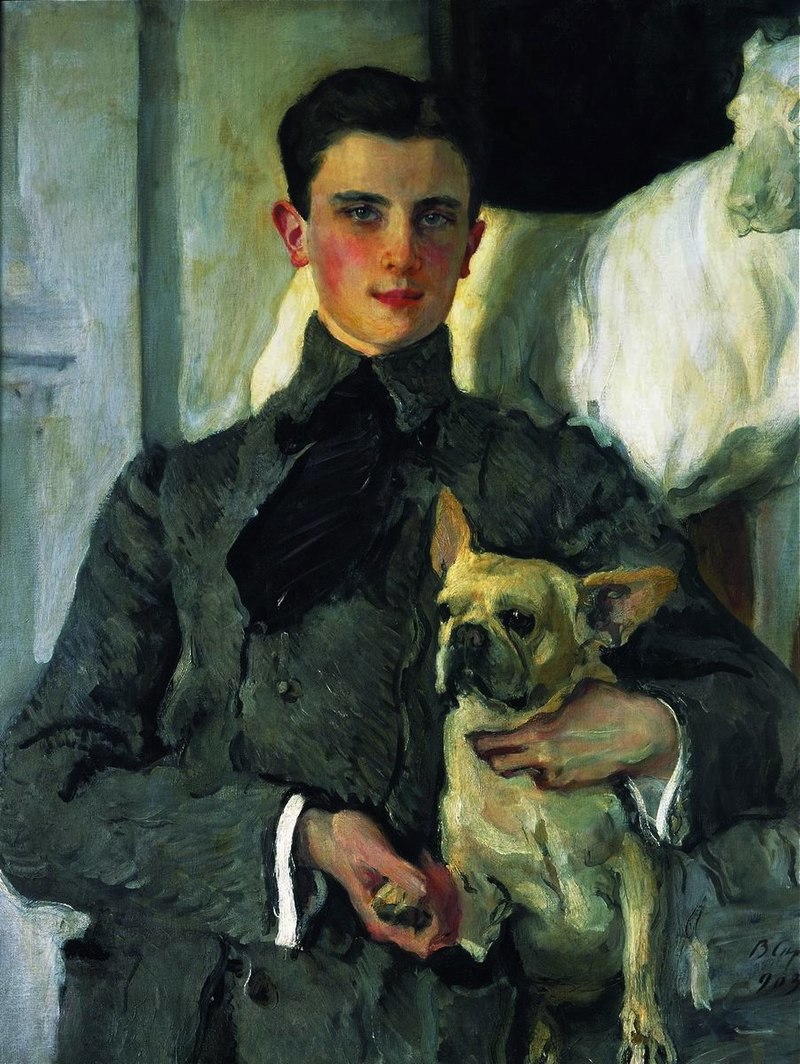 Prince Felix Felixovich Yusupov, Count Sumarokov-Elston (23 March [O.S. 11 March] 1887 – 27 September 1967) was a Russian aristocrat, prince and count from the Yusupov family. He is best known for participating in the assassination of Grigori Rasputin and marrying the niece of Tsar Nicholas II. He was bisexual and it has been said he had a close relationship with Grand Duke Dmitri Pavlovich of Russia.

He was born in the Moika Palace in Saint Petersburg, the capital of the Russian Empire. His father was Count Felix Felixovich Sumarokov-Elston, the son of Count Felix Nikolaievich Sumarokov-Elston. Zinaida Yusupova, his mother, was the last of the Yusupov line, of Tatar origin, and very wealthy. For the Yusupov name not to die out, his father (5 October 1856, Saint Petersburg – 10 June 1928, Rome, Italy) was granted the title and the surname of his wife, Princess Zinaida Yusupova upon their marriage, on 4 April 1882 in Saint Petersburg.

The Yusupov family, richer than any of the Romanovs, had acquired their wealth generations earlier. It included four palaces in Saint Petersburg, three palaces in Moscow, 37 estates in different parts of Russia (Kursk, Voronezh and Poltava), coal and iron-ore mines, plants and factories, flour mills and oil fields on the Caspian Sea.[2]

Felix led a flamboyant life and is thought to have been bisexual. When he addresses this claim in his book Lost Splendor, however, he flat out denied it.[3] From 1909 to 1913, he studied Forestry and later English at University College, Oxford,[4] where he was a member of the Bullingdon Club,[5] and established the Oxford Russian Club.[6] Yusupov was living on 14 King Edward Street, had a Russian cook, a French driver, an English valet, a housekeeper, and he spent much of his time partying. He owned three horses, a macaw and a bulldog called Punch. He smoked hashish,[5] played polo and became friendly with Luigi Franchetti, a piano player, and Jacques de Beistegui, who both moved in.[7] At some time, Yusupov got acquainted with Albert Stopford and Oswald Rayner. He rented an apartment in Curzon Street, Mayfair, and met several times with the ballerina Anna Pavlova, who lived in Hampstead.

Back in Saint Petersburg, he married Princess Irina of Russia, the Tsar's only niece, in the Anichkov Palace on 22 February 1914. The bride was wearing a veil that had belonged to Marie Antoinette.[8] The Yusupovs went on their honeymoon to Cairo, Jerusalem, London and Bad Kissingen, where his parents were staying.

When World War I broke out in August 1914, both were briefly detained in Berlin. Irina asked her relative, Crown Princess Cecilie of Prussia, to intervene with her father-in-law, Kaiser Wilhelm II. The Kaiser refused to permit the Yusupov family to leave but offered them a choice of three country estates to live in for the duration of the war. Felix's father appealed to the Spanish ambassador in Germany and won permission for them to return to Russia via neutral Denmark to the Grand Duchy of Finland and from there to Saint Petersburg[9] The Yusupovs' only daughter, Princess Irina Felixovna Yusupova, nicknamed Bébé, was born on 21 March 1915.[10] Bébé was largely raised by her paternal grandparents until she was nine. She was very spoiled by them. Her unstable upbringing caused her to become "capricious," according to Felix. Felix and Irina, raised mainly by nannies themselves, were ill-suited to take on the day-to-day burdens of child-rearing. Bebe adored her father but had a more distant relationship with her mother.[11]

After the death of his brother, Felix was the heir to an immense fortune. Consulting with family members about how best to administer the money and property, he decided to devote time and money to charitable works to help the poor. The losses at the Eastern Front were enormous, and so Felix converted a wing of the Liteyny Palace into a hospital for wounded soldiers.

Felix was able to avoid entering military service himself by taking advantage of a law exempting only-sons from serving. Irina's first cousin, Grand Duchess Olga, to whom she had been close when they were girls, was disdainful of Felix: "Felix is a 'downright civilian,' dressed all in brown, walked to and fro about the room, searching in some bookcases with magazines and virtually doing nothing; an utterly unpleasant impression he makes – a man idling in such times," Olga wrote to Nicholas on 5 March 1915 after paying a visit to the Yusupovs.[12] In February 1916 Felix began studies at the elite Page Corps military academy and tried joining a regiment in August.[13]

"Yusupov's plan, as he described it in his book, was to seek closer acquaintance with the healer Grigori Rasputin, and win his confidence. He asked Rasputin to cure a slight malady from which he suffered."[14] Yusupov first approached the lawyer Vasily Maklakov, who agreed to advise Felix.[15] Yusopov then approached Sergei Mikhailovich Sukhotin, an army officer in the Preobrazhensky Regiment who was recovering from injuries who was a friend of his mother.[16] Grand Duke Dmitri received Yusupov's suggestion with alacrity, and his alliance was welcomed as indicating that the murder would not be a demonstration against the [Romanov] dynasty.[17]

On the night of 29/30 December (NS) 1916, Felix, Dmitri, Vladimir Purishkevich, assistant Stanilaus de Lazovert and Sukhotin killed Rasputin in the Moika Palace. A major reconstruction of the palace had almost been finished, with a small room in the basement carefully furnished. (For some time, Yusupov lived in a mansion owned by Grand Duchess Xenia Alexandrovna of Russia, his mother-in-law.) Rasputin was hit by a bullet that entered his left chest and penetrated the stomach and the liver; a second entered the left back soon after the first and penetrated the kidneys. The wounds were serious, and Rasputin would have died in 10–20 min, but he succeeded in escaping, only to fall in the snow-clad courtyard. It is not clear whether or not Yusupov beat Rasputin with a sort of dumb bell. It is also not clear if it was Purishkevich who shot him in the forehead. The conspirators finally threw the corpse from Bolshoy Petrovsky Bridge into an ice hole in the Malaya Neva.

On the Empress's orders, a police investigation commenced and traces of blood were discovered on the steps to the back door of the Yusupov Palace. Prince Felix attempted to explain the blood with a story that one of his favourite dogs was shot accidentally by Grand Duke Dmitri. Yusupov and Dmitri were placed under house arrest in the Sergei Palace. (The upper levels of the palace were occupied by the British embassy and the Anglo-Russian Hospital.[18])

The Empress had refused to meet the two but said that they could explain what had happened in a letter to her. She wanted both shot immediately, but she was persuaded to back off from the idea.[18] Without a trial,[19] the Tsar sent Dmitri to the front in Persia; Purishkevich was already on his way to the front in Romania. The Tsar banished Yusupov to his estate[20] in Rakitnoye, in Belgorod Oblast.

Yusupov published several accounts of the night and the events surrounding the murder. Recent authorities have cast doubt on Yusupov's account. Fuhrmann thinks that Yusupov was the man who hatched the plot and who carried it out. "The clumsy way the assassination was carried out shows it was the work of an amateur."[21] Fuhrmann also thinks Yusupov's "...candid Memoirs were corroborated by the other conspirators."[22]

One week after the February Revolution, Nicholas abdicated the throne on 2 March. Following the abdication, the Yusupovs returned to the Moika Palace before they went to Crimea. They later returned to the palace to retrieve jewels (including the blue Sultan of Morocco Diamond, the Polar Star Diamond, and a pair of diamond earrings that once belonged to Marie-Antoinette) and two paintings by Rembrandt, the sale proceeds of which helped sustain the family in exile. The paintings were bought by Joseph E. Widener in 1921 and are now in the National Gallery in Washington, DC.[23]

In Crimea, the family boarded a British warship, HMS Marlborough, which took them from Yalta to Malta. On the ship, Felix enjoyed boasting about the murder of Rasputin. One of the British officers noted that Irina "appeared shy and retiring at first, but it was only necessary to take a little notice of her pretty, small daughter to break through her reserve and discover that she was also very charming and spoke fluent English."[24]

From Malta, they travelled to Italy and then to Paris. In Italy, lacking a visa, he bribed the officials with diamonds. In Paris, they stayed a few days in Hôtel de Vendôme before they went on to London. In 1920, they returned to Paris and purchased a house on the Rue Gutenberg in Boulogne-sur-Seine.

Prince and Princess Yussupov lived between:

The Yusupovs founded a short-lived couture house Irfé, named after the first two letters of their first names.[27] Irina modeled some of the dresses the pair and other designers at the firm created. Yusupov became renowned in the Russian émigré community for his financial generosity. Their philanthropy and their continued high living and poor financial management extinguished what remained of the family fortune. Felix's bad business sense and the Wall Street Crash of 1929 eventually forced the company to shut down.[28]

In 1932, he and his wife successfully sued MGM in the English courts for invasion of privacy and libel in connection with the film Rasputin and the Empress. The alleged libel was not that the character based on Felix had committed murder but that the character based on Irina, called "Princess Natasha" in the film, was portrayed as having been seduced by the lecherous Rasputin.[29] In 1934, the Yusupovs were awarded £25,000 damages, an enormous sum at the time, which was attributed to the successful arguments of their barrister, Sir Patrick Hastings. The disclaimer that now appears at the end of every American film, "The preceding was a work of fiction, any similarity to a living person etc.," first appeared as a result of the legal precedent set by the Yusupov case.[30]

In 1965, he also sued CBS in a New York court for televising a play based upon the Rasputin assassination. The claim was that some events were fictionalized, and under a New York State statute,[31] his commercial rights in his story had been misappropriated. The last reported judicial opinion in the case was a ruling by New York's second highest court that the case could not be resolved upon briefs and affidavits but must go to trial.[32] According to an obituary of CBS's lawyer, CBS eventually won the case.[33]

In 1928, after Yusupov published his memoir detailing the killing of Rasputin, Rasputin's daughter, Maria, sued Yusupov and Dmitri in a Paris court for damages of $800,000. She condemned both men as murderers and said any decent person would be disgusted by the ferocity of Rasputin's killing.[34] Maria's claim was dismissed. The French court ruled that it had no jurisdiction over a political killing that had occurred in Russia.[35]

Irina and Felix enjoyed a happy and successful marriage for more than 50 years. When Felix died in 1967, Irina was stricken by grief and died three years later.[36] He was buried in Sainte-Geneviève-des-Bois Russian Cemetery, in the southern suburbs of Paris. Yusupov's private papers and a number of family artifacts and paintings are now owned by Víctor Contreras, a Mexican sculptor who, as a young art student in the 1960s, met Yusupov and lived with the family for five years in Paris.[37]

Some of the Yusupov possessions owned by Contreras were auctioned in November 2016 by Coutau Bégarie. This included correspondence with the family of his father's mistress, Zénaïde Gregorieff-Svetiloff.